1,000 PG County police officers will have body cameras by the end of the year 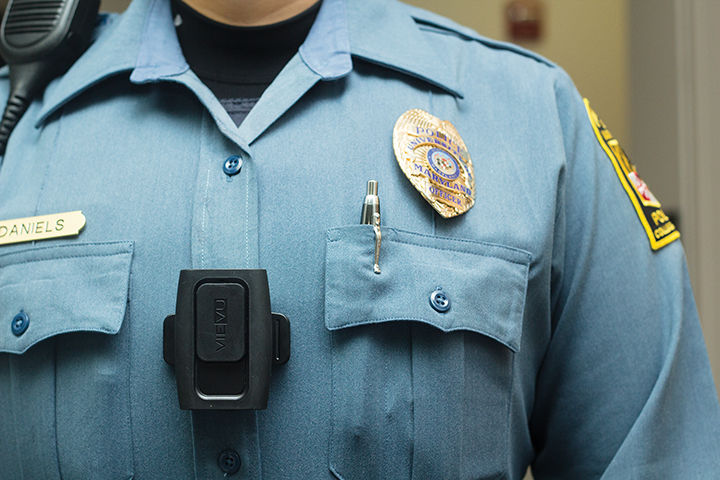 A University Police officer wears the new VieVu body cameras as a part of a new initiative. (File Photo/ The Diamondback)

The move comes after a Prince George’s police officer was charged in the fatal Jan. 27 shooting of a handcuffed man, prompting calls for body-worn cameras. Though Alsobrooks recently announced the program, she decided last October to devote funds in the fiscal year 2021 budget toward body cameras, spokesperson Gina Ford said.

“This program will increase transparency and accountability, which will continue to build public trust, as the County continues to see a reduction in crime,” read a statement from the county executive office.

The rollout of the new cameras will begin July 1. Eighty officers currently wear body cameras as part of a pilot program that began in 2015.

University of Maryland sociology professor Rashawn Ray, who has researched the positive effects of body-worn cameras, said “it’s past time” for the county to use more cameras.

“They’ve been saying the same things for the same broken record for five years,” said Ray, who is currently on sabbatical and working at the Brookings Institution in Washington, D.C. “Just make it happen.”

Alsobrooks allocated $1.2 million for the body camera program in the county budget she will submit to the county council, she told Fox 5 DC Wednesday. Last year, in her first year as county executive, she allocated $500,000 of the budget toward body camera technical infrastructure costs.

Only members of the county’s patrol force — the officers that interact with the public — will have cameras, said Mark Magaw, the county’s deputy chief administrative officer for public safety, in an interview with Fox 5 DC. There are over 1,500 officers total.

But Ray said he remains skeptical about the rollout.

“I don’t understand why it’s not gonna be on all officers by the end of the year,” he said. “I do think it’s necessary. But I also think that our county leaders simply just need to get it done.”