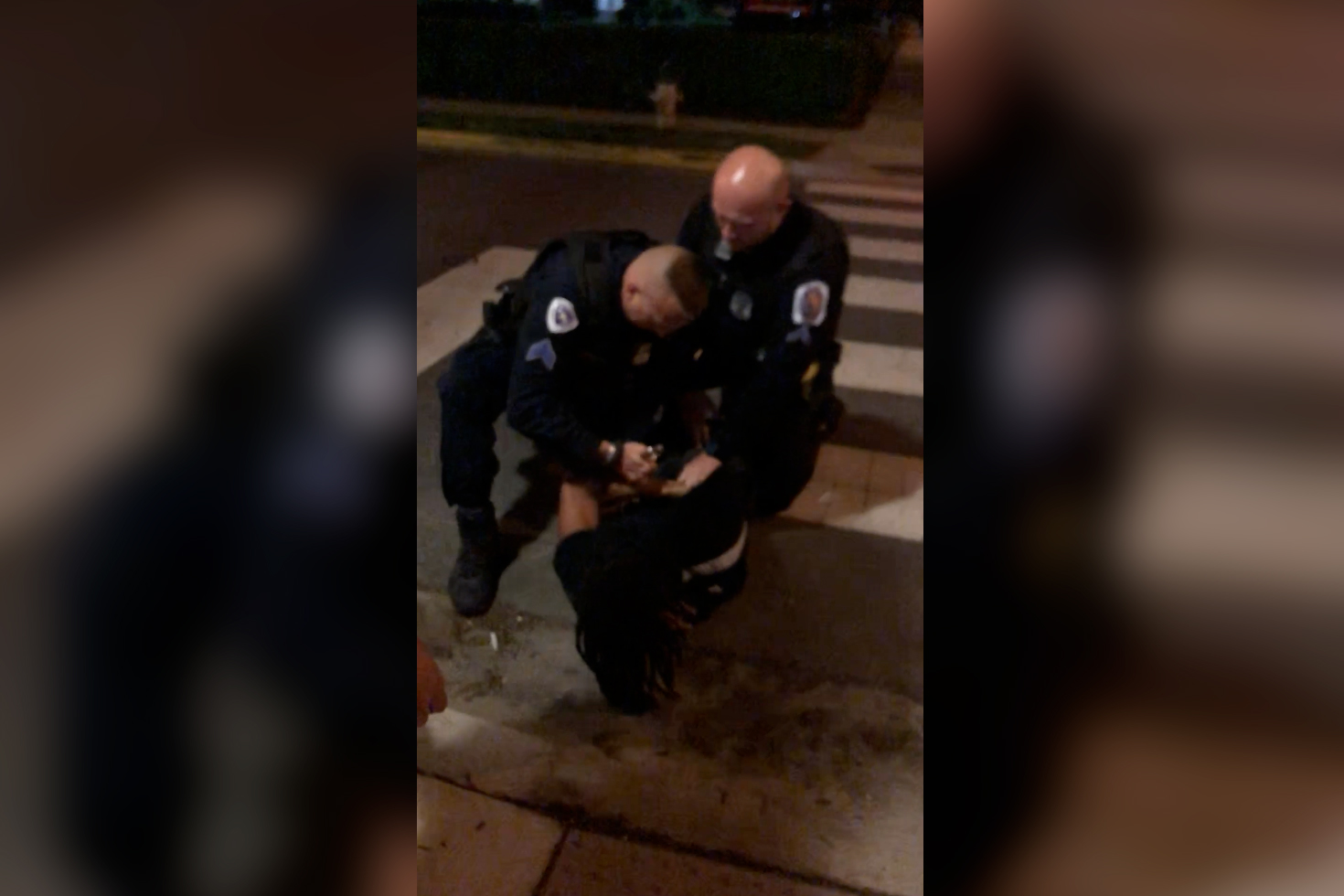 Two skateboarders were forced to the ground by a pair of Prince George’s County Police officers during a confrontation late Wednesday night in downtown College Park.

After about 10 minutes of skateboarding down College Avenue, a group of skaters noticed two men walking toward them, but did not immediately recognize them as police officers. Nate, a 21-year-old Towson student from Burtonsville who witnessed the events and declined to give his last name, said they yelled to “sit down on the curb” without identifying themselves as police.

Prince George’s County Police received a call shortly before 11 p.m. that four males were skateboarding in front of cars near the entrance to the Landmark apartment complex and acting like they’d been hit, said spokesperson Jennifer Donelan.

Donelan said the officers arrived on the scene to find Juan Cardenas, a 17-year-old from Silver Spring, in the street “doing skateboard tricks.” She said they tapped him on the shoulder to ask him to leave the street, and Cardenas began to “curse him out.”

“They are in uniforms,” Donelan said. “There is no doubt that they’re the police.”

But Cardenas told The Diamondback that police didn’t clearly identify themselves or give him a warning.

“[The police] grabbed [me] by my shoulder and tried to harass me around like I was their son,” he said. “And they yelled in my ear, ‘Get on the ground, sit on the sidewalk.’ So I got confused — I didn’t know what’s going on.”

A shaky video of the confrontation taken by Nate and provided to The Diamondback begins with one of the officers standing with his hand on Cardenas’ shoulder. The officer then kicks at Cardenas’ ankle — what Donelan described as a “leg sweep takedown” — while shoving him to a seated position on the curb near the intersection of College and Yale avenues.

Cardenas, who has skated in College Park on three previous occasions without incident, said the officers attempted to force him down to the curb when he didn’t immediately comply.

“No verbal warning whatsoever, I got down, held down by my shoulder, started to get aggravated, got yelled at to get down on the floor and sit on the sidewalk,” he said. “I was like, ‘Yo, get your hands off me, I’m confused, I don’t know what’s going on.’ They tried to use brute force to put me on the ground.”

Donelan said this is protocol for people who don’t comply with police commands.

“He’s refusing the commands to sit down,” she said. “If he just sat down on the curb, none of this would have happened. All they had to do was obey commands.”

In the background of the video, Nate repeatedly says “Juan,” while Cardenas asks the officer, “What did I do?”

“Do you understand the English language?” the officer says forcefully, and Cardenas answers, emphatically, that he does.

The officer then turns to Vashawn, a 21-year-old Montgomery County resident who was skating with the group. Vashawn has been talking over the officer, who sharply tells him to sit down.

“What the fuck did I do?” asks Vashawn. The officer responds that he was “blocking traffic.”

“The fuck, am I supposed to be scared of you?” Vashawn asks.

“Do you want to go to jail?” the officer responds sharply.

“For what?” Vashawn yells at the officer, who replies “disorderly conduct!”

“Fuck your disorderly conduct! Get the fuck off me!” Vashawn shouts back, while his friends beg him to calm down.

The video is jumbled away from the action for several seconds. When Vashawn comes back into view, two officers are wrestling him to the pavement, gripping his neck and trying to force his hands behind his back.

After a few seconds of struggle, they get him on the ground. One officer straddles Vashawn’s back while the other clicks handcuffs on his wrists.

Vashawn is nonviolent but continues to vent at the officers. He tells them he has a broken hand and accuses them of “looking for a fucking quota” before they pick him up off the ground.

“Are you serious, yo? Because I’m fucking black?” he shouts at one point. “Are you fucking serious?”

Vashawn was arrested, and was “very apologetic” afterward, Donelan said. Cardenas was released to a family member on the scene.

Cardenas said they had chosen to skateboard in the street rather than the sidewalk because they didn’t want to run into pedestrians.

“All this could’ve been avoided with some smart verbal advice in the beginning,” Cardenas said. “If I were to hear from across the street, ‘Yo, get off the street,’ I would’ve been like, ‘Oh shit,’ and hopped on the sidewalk and nothing would’ve happened. But [there was] no verbal warning.”

Donelan said pedestrian safety is a “huge issue” for the department, which has increased enforcement in the area. She said the officers were trying to make sure the skateboarders stayed safe, and the way the police were treated was “over the top.”

“These are difficult times to be a law enforcement officer,” she said. “Basically, the citizens can dial up and talk to officers and curse them out, and the minute an officer performs their job, they come under scrutiny.”