No. 13 Maryland women’s basketball explodes in third quarter to beat No. 18 Indiana, 79-69 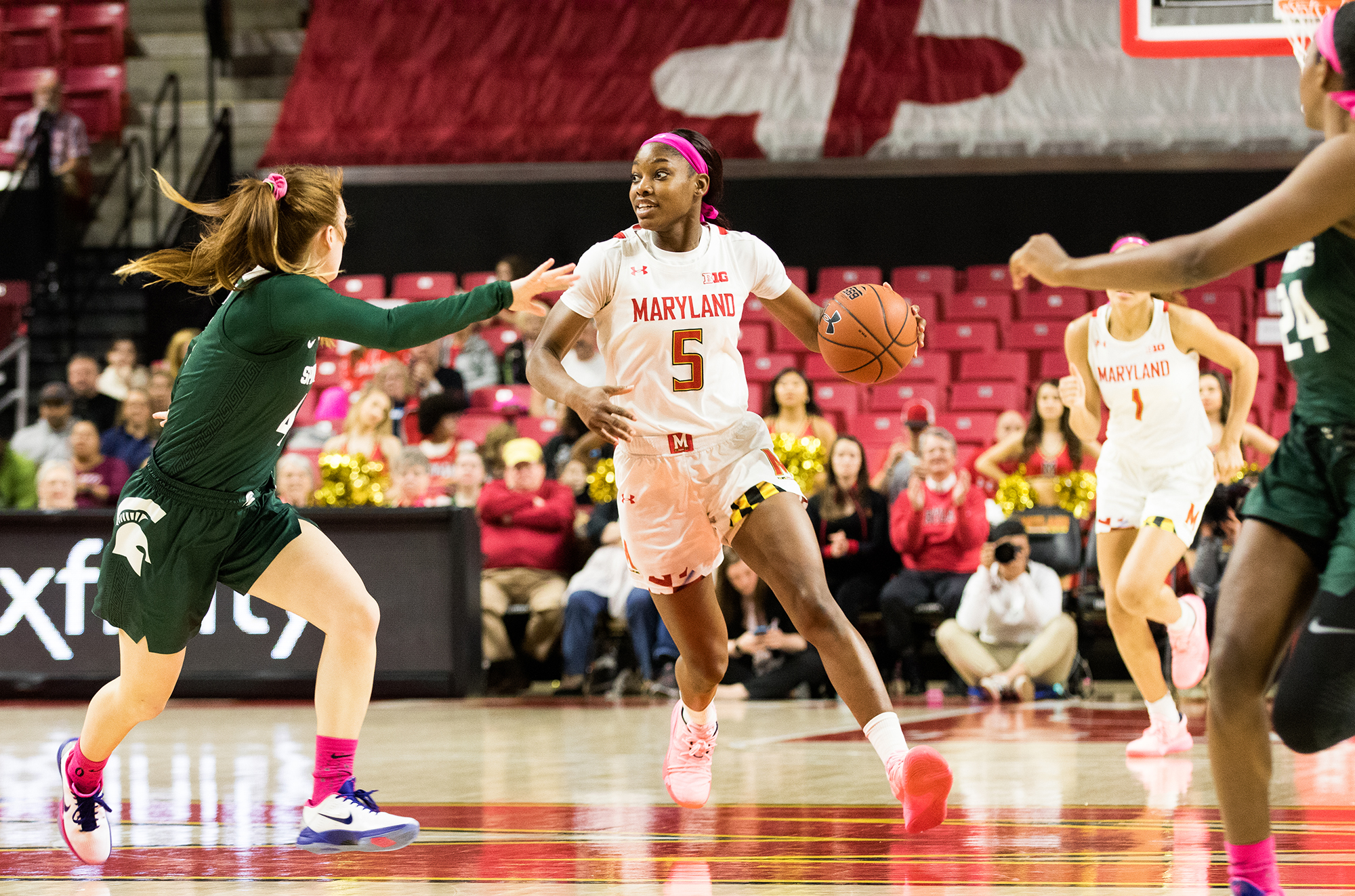 Maryland women’s basketball needed to get physical coming off a first half that saw the team down six at halftime after allowing Indiana to convert at a 59.3 percent clip.

Forward Shakira Austin’s back-to-back fadeaway jumpers to start the third quarter elevated her team’s energy and inspired belief that they could take control of the contest. Forward Kaila Charles and guard Ashley Owusu followed the sophomore’s leadership to mount a 26-11 period and secure a lead that they’d never relinquish.

With a combined 40 points from Charles and Owusu, Maryland beat Indiana, 79-69, on Thursday to sweep the season series and earn its eighth consecutive win.

“It’s a special win. Road wins are precious,” coach Brenda Frese said. “They were really exposing our defense in the first half, [so] to stay committed and true to it to bounce back in the second half just [shows] their growth and their maturity.”

Even with Maryland beginning the contest with its signature full-court press, Indiana got whatever and wherever it wanted on offense. Guard Ali Patberg had Terp defenders a step slow on nearly every possession and was able to create several scores for both herself and teammates, notching six points and four assists in the process.

The Hoosiers shot 75 percent in the frame and played near-perfect on offense, but Frese’s squad hung around. Back-to-back buckets in the final 15 seconds of the quarter cut her team’s deficit to four, but the Terps were outplayed more significantly than the score indicated.

“I thought [Indiana] was just really aggressive in their pursuit to the rim,” Frese said. “They had a mentality that they were trying to get to the rim and get us in foul trouble and get to the free throw line. I thought they punched first.”

The second period began much the same, but this time forward Mackenzie Holmes did most of the damage. She quickly scored eight of her 10 points in the half, showcasing an array of post moves that had forward Stephanie Jones repeatedly out of position.

Maryland was down as much as 10 in the half but never flinched and stayed the course. A strong block by Charles finally provided some resistance to a red-hot Hoosiers offense and elevated her team’s physicality on defense for the final five minutes of the quarter.

Maryland cut the deficit to four, but its renewed commitment on defense appeared to hinder its offensive execution. Both teams struggled to score in the half’s final three minutes before a strong inside score had Indiana up six as both teams retreated to the locker room.

Going 1-of-10 from behind the arc and posting a minus-seven rebounding differential would have most teams behind by double-digits, but the Terps stayed within striking distance by limiting turnovers and getting to the line, committing only five and hitting 7-of-8, respectively.

“We felt like at halftime we hadn’t played our best half and we were only down six, so we felt like if we locked-in and had greater attention to detail on both ends of the floor, good things were in store for us,” Frese said. “That mentality [and] energy took us to another level.”

Maryland capitalized on that earlier effort, exploding for a 20-5 run to start the third quarter. Back-to-back tough fadeaway jumpers from Austin sparked the run and energized her teammates and the Terps built from there.

Forward Kaila Charles then took her turn scoring. Her six points came in quick succession, with one of her highlight plays of the season coming from a fastbreak euro-step between multiple Indiana defenders.

Owusu caught fire soon after. Her seven points and two assists in the frame helped extend her team’s lead to double digits as she seemingly made the right decision on every possession.

Whether it came from behind the back dribbles that stunned defenders, floaters, splitting double-teams that resulted in layups, Owusu was able to demoralize the opposition and secure momentum for Maryland.

“We were just saying [to] keep the hammer on them. I was like, ‘Once we get the lead we’re not looking back and we’re just going to keep going up,’” Charles said. “We were just encouraging each other to make good plays, find each other and we were celebrating each other’s success.”

The Hoosiers cut the lead to six quickly into the fourth, and both teams would trade buckets or free throws for most of the quarter. Both teams shot a combined 52 percent from the field and played with intensity and energy, but the Terps were always one step ahead.

Maryland routinely bailed-out Indiana shooters with fouls that resulted in 11 free throws in the frame. But the Terps answered every foul with a score of their own.

Once Indiana was forced to score without being fouled, no player besides Patberg was able to get a bucket. Owusu continued to stay aggressive and penetrate the defense, scoring eight in the period and willing her team to victory.

With a signature third quarter and resilient play, the Terps earned their eighth straight win and the best conference record in the Big Ten.