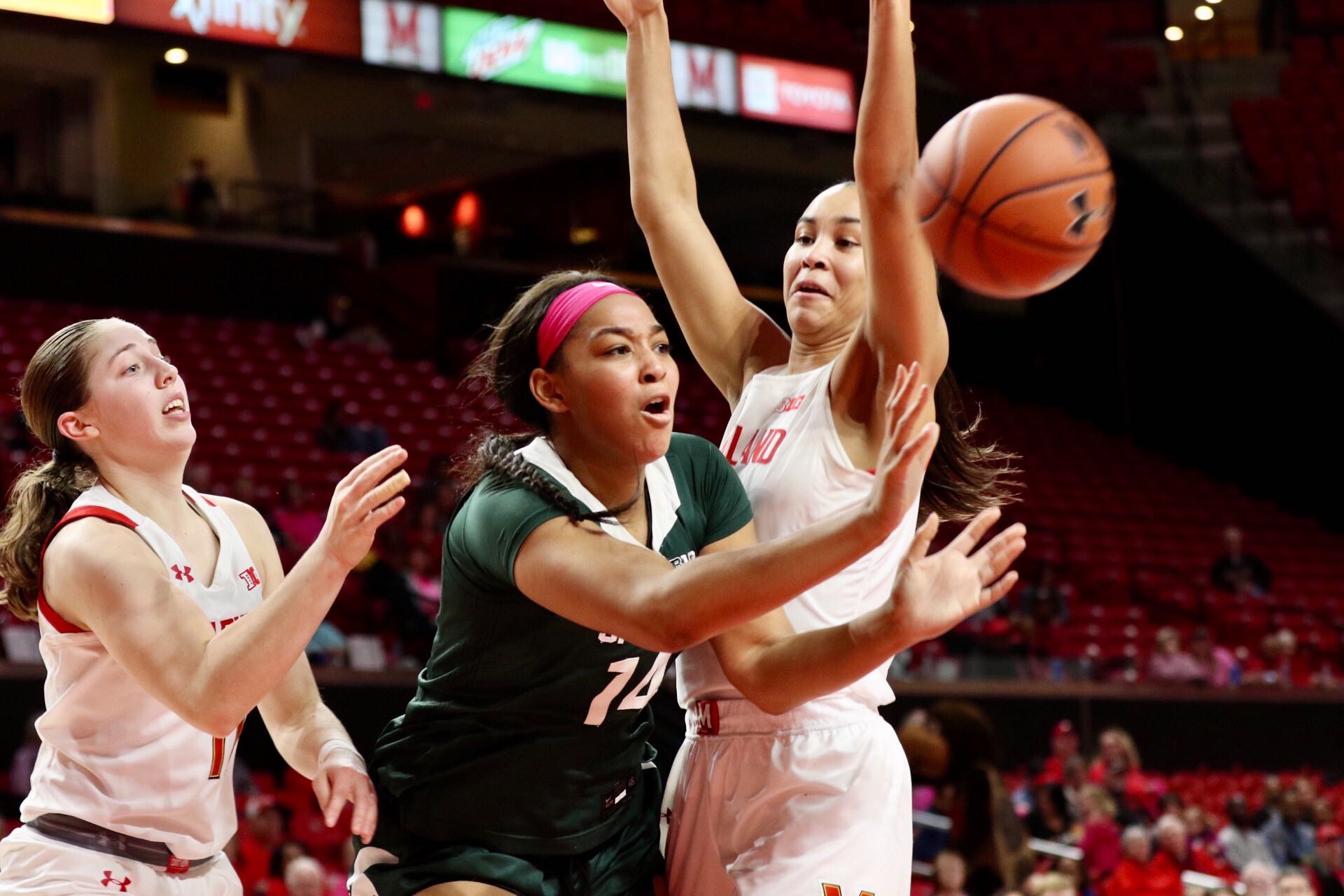 Some nights, there’s no stopping the player with the hot hand.

For Maryland women’s basketball on Monday, it was guard Taylor Mikesell who caught fire. But those flames quickly spread to the rest of her teammates and resulted in the most efficient offensive display of the season.

On a night when the Terps seemingly couldn’t miss, they shot season-highs in field goal and three-point percentage en route to a 94-53 drubbing against Michigan State, led by Mikesell’s four triples and guard Ashley Owusu’s 22 points.

“I thought, obviously, Ashley separated herself tonight and just made some tremendous plays that really got us sparked and going,” coach Brenda Frese said. “It’s a fun night when you share the basketball the way we did, you shoot it as well as we did.”

Constantly preaching how she wants her team to “punch first” in every game, Frese’s team did just the opposite in the first five minutes in this contest.

Maryland’s typically energetic defense looked lethargic to start, allowing the Spartans to go up 10-8 before Frese tried to regroup her players during the first media timeout.

Owusu then took matters into her own hands. She looked reinvigorated and threw a perfect cross-court pass to Mikesell in the corner for a triple that ended the team’s scoring drought.

The Terps’ momentum snowballed from there.

The game’s pace quickened in the back half of the quarter, with forward Kaila Charles reaping the majority of the benefits. Whether it was from Owusu’s pinpoint passes or on strong drives to the rim that got her to the free throw line, Charles tallied 11 points in the frame.

“When you can share the basketball the way we did with 22 assists, I think you can hear the communication is greater,” Frese said. “You see how easy the game can be for us when we’re in a groove to want to make the right play for one another.”

The Terps and Spartans both started the second period slow, making only two total shots in the first three minutes. An Owusu pull-up jumper broke the ice, though, and Maryland exploded offensively from then on.

Mikesell and Owusu combined for 15 points in the frame. The Terps’ fast-paced style overwhelmed Michigan State on both ends and got the crowd energized as they ended the quarter on a 15-2 run that earned them a 23-point halftime lead.

While Maryland shot 64 percent in the half, its ability to get to the line demoralized the Spartans. The Terps went 10-of-13 from the charity stripe, with many of the fouls resulting from Michigan State’s inability to match-up physically.

“I’ve definitely been drawing a lot more fouls this year,” said forward Shakira Austin, who drew eight fouls in the contest. “Just stepping up to the line with confidence every time has been the main focus and just making sure that I get those free, easy buckets.”

Maryland continued to pile it on in the third, knocking down a barrage of triples that extended the lead to as much as 39.

Almost every player scored in the frame, but it was Mikesell’s 10 points and three assists that put the game away. Her sharpshooting led the way for the rest of her teammates to let it fly, hitting at an 81.3 percent clip and going 5-of-6 from behind the arc as a whole.

“I think it started on the defensive end. We got stops, we were able to uncontested shots on the 3-point line in transition,” Mikesell said. “Ashley and our other guards did a good [job] of re-kicking it out to us shooters.”

After allowing only 22 points in the first half, Maryland’s defense did get sloppy in the third. It allowed 16 points in the frame, with multiple buckets coming from overly aggressive attempts at steals that resulted in open looks for the Spartans, but the Terps’ offense was too potent for that to dent their lead.

Doubling Michigan State’s score of 38 going into the fourth, Maryland’s bench polished off the victory behind the team’s best shooting performance of the season.

The team hit 61 percent from the field, 69.2 percent from behind the arc and had 22 assists on 36 makes. It was the epitome of an offensive showcase — and it earned the Terps their seventh-straight win.

“Loved seeing the bench contribute the way that they did and everyone being able to play some impactful minutes,” Frese said. “Love where the ownership is with this team since the Iowa loss that they’ve just taken some great pride in wanting to play at the highest level.”