Blair Watson’s role is understated, but her defense sets the tone for Maryland basketball 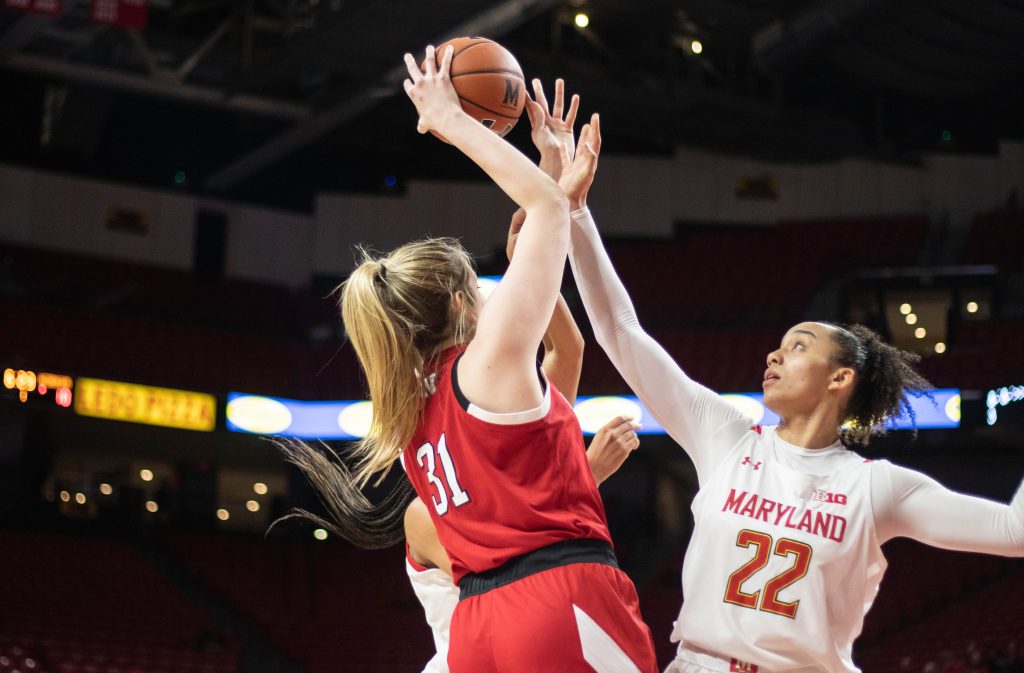 Guard Blair Watson gets her hand in the face of Nebraska center Kate Cain in the Terps' 87-69 win on Jan. 16, 2020 at Xfinity Center. (Julia Nikhinson/The Diamondback)

Holding a seven-point lead midway through the fourth quarter against a Northwestern squad that dismantled it less than a month earlier, Maryland women’s basketball was still in search of a game-clinching play.

The Terps had just one field goal in the frame to that point, and the Wildcats seemed intent on capitalizing. So guard Blair Watson took matters into her own hands on the defensive end, as she’s done routinely throughout the season.

She heavily pressured Northwestern guard Veronica Burton near the halfcourt line, snatching the ball and finding a streaking teammate to ignite a fast break. Watson wasn’t finished, though, and followed the play to be in position to grab the long rebound and hit a jumper from the foul line.

That sequence was the dagger the Terps needed to secure their fifth straight win, coming in classic Watson fashion — with staunch defense fueling her offense. She finished the contest with 13 points, seven rebounds and three steals, adding another defensive showcase to her mounting Maryland basketball resume.

“[Watson] just sets the tone, the head of our press, you can feel that energy that we dictate off of her,” coach Brenda Frese said. “She can make so many plays.”

Following an up-and-down junior season in which she was still feeling the effects of her ACL tear the year before, Watson has now come into her own as the team’s best 3-and-D player.

Despite not playing in the team’s first game against Wagner, Watson has a team-leading 58 steals — 19 more than the next closest player and 10 more than she had all of last season. She’s also hit 44 triples this season at a 37 percent clip, good for the second most on the team.

The Nutley, New Jersey, native’s active hands and lateral quickness shine in Maryland’s new defensive identity. Frese often puts Watson at the point of the team’s “12” defense, a 1-2-2 trapping press that generates 13.2 steals per game, the third best mark in the NCAA.

“[I want] to give my all-out energy and effort every day, especially on defense because that’s something that I absolutely love,” Watson said. “It doesn’t even matter if my shot is falling or what’s going on around me because at the end of the day defense is something I really enjoy and my teammates always got my back.”

With her defensive dominance, Watson was named one of the 15 candidates for the Naismith National Defensive Player of the Year Award on Jan. 23. She says her success stems from her commitment to doing whatever the team needs to win, and her coaches and teammates understand her importance as the team progresses through its conference slate and into the postseason.

She’s second in the Big Ten and 16th in the nation in takeaways at 3.1 per game, consistently making every possession difficult for the opponent’s best perimeter player. In turn, fellow guards Taylor Mikesell and Ashley Owusu are able to save more energy to initiate the offense. Watson even tied a 39-year-old program record with nine steals in a loss at Iowa on Jan. 9.

Her shot might not always be falling, but Watson is undoubtedly one of Maryland’s most impactful players. And come March, the Terps will rely on her to stymie some of the nation’s most potent offensive threats.

“I am thrilled for her that she is getting that national exposure because we rely on [her defense], we count on it,” Frese said. “We’re a different team if she doesn’t bring that.”