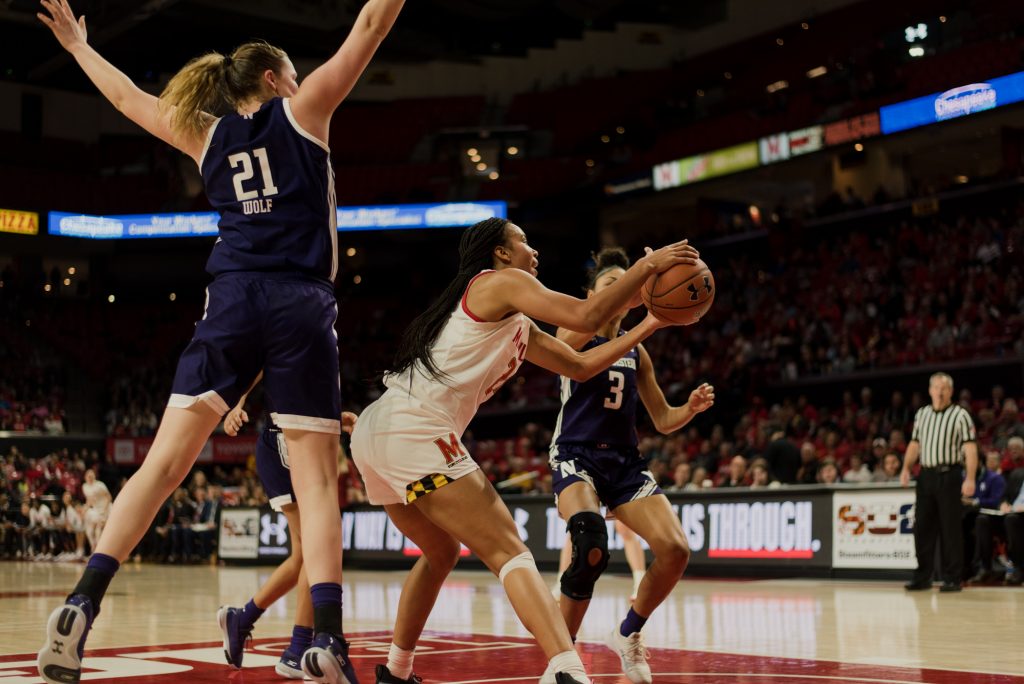 When Maryland women’s basketball’s tallest player, forward Shakira Austin, went down with an injury at the end of the first quarter Sunday, the Terps’ lead quickly dwindled.

Maryland saw its six-point edge after 10 minutes become a three-point deficit by the halftime buzzer with Austin off the floor. But senior forward Stephanie Jones rose to the occasion, leading her team back to ensure the Terps wouldn’t fall to the Wildcats for a second time this season.

Behind her 14 points and a season-high 11 rebounds, Maryland defeated Northwestern, 70-61, at home on Sunday to avenge its previous loss to the Wildcats and push its winning streak to five.

“I’m really proud with the punch we came back with in the third quarter and in the second half. I think it speaks volumes to this team, just their fight and their commitment to stay the course,” coach Brenda Frese said. “A month ago we didn’t quite adjust to this game that well, so I think you see the strides we’ve been able to make coming out of that.”

The Terps started strong as guard Taylor Mikesell found fellow shooter Blair Watson for a triple off a skip pass on the game’s opening possession.

The two teams traded buckets over the next couple of minutes before beginning a sloppy stretch of play in which both sides failed to score. Maryland couldn’t get out of its own way, giving away possessions due to careless passes while their defense stood strong and forced the Wildcats to settle for numerous tough shots.

But Maryland’s defense took a hit when Austin appeared to roll her ankle near the end of the period when she landed on another player’s foot attempting to corral a rebound. She was ruled doubtful to return and never entered the contest again, leaving her team without its number one interior defender.

The Terps initially suffered in her absence, relinquishing their six-point first quarter lead and failing to score for the first three minutes of the second frame. Northwestern was able to get into the paint without much resistance, with guard Lindsey Pulliam scoring eight of her 10 first-half points with Austin sidelined.

Once Frese called timeout midway through the period, her team returned to the court refocused but without their 6-foot-5 sophomore. Both teams battled back and forth to end the half, but Maryland’s multiple sloppy passes gave away possessions, leaving the team down three at halftime.

“I thought we [punched first] in the first quarter and then I thought Northwestern, being the great team they are, made a terrific run in the second,” Frese said. “Halftime came at about the right time for us to be able to go in there a regroup.”

Both squads continued to trade blows to start the third quarter. Jones helped counteract Maryland’s many missed jumpers by seemingly always being in the right spot to get the putback. Her six points and five rebounds allowed the Terps to tie the game at 36 midway through the period.

Guard Ashley Owusu provided the spark Maryland needed to break the game open. During a 12-4 run to end the frame, the freshman fed forward Kaila Charles for a layup with a slick bounce pass, then saved a ball from going out of bounds before hitting a streaking Mikesell in stride for an easy score.

Her play to end the period, combined with two Northwestern shot-clock violations, had the Terps up eight heading into the final 10 minutes.

“I just knew that we had to really pick it up for [Austin],” Jones said. “She does a lot down-low, like getting rebounds, scoring, so I knew that me and Kaila, Faith, anybody down-low had to pitch-in and step up for her, too.”

But a slow start to the fourth frame almost saw the game slip away. Maryland didn’t score for the first three minutes, and a Pulliam four-point play helped cut the lead to as little as two points.

When forward Faith Masonius entered the game, however, she swung the contest back in the Terps’ favor. She quickly made a pair of free throws to end her team’s scoring drought, two of her six points in the frame to go along with three rebounds.

Watson fed off the freshman’s play and put the game out of reach by turning defense into offense. Her two steals in the period came from hounding press defense, and five consecutive points helped extend the lead to double digits.

She capped the win off with a layup, bringing the Xfinity Center crowd to its feet as Maryland claimed its fifth straight win.

“I thought the punch off the bench was huge. The play that Ashley gave us today, we have to continue to have that faith,” Frese said. “We’re small in numbers, so everyone’s got to be ready to continue to play that way.”