Maryland basketball’s Taylor Mikesell was an all-around weapon at point guard vs. Indiana 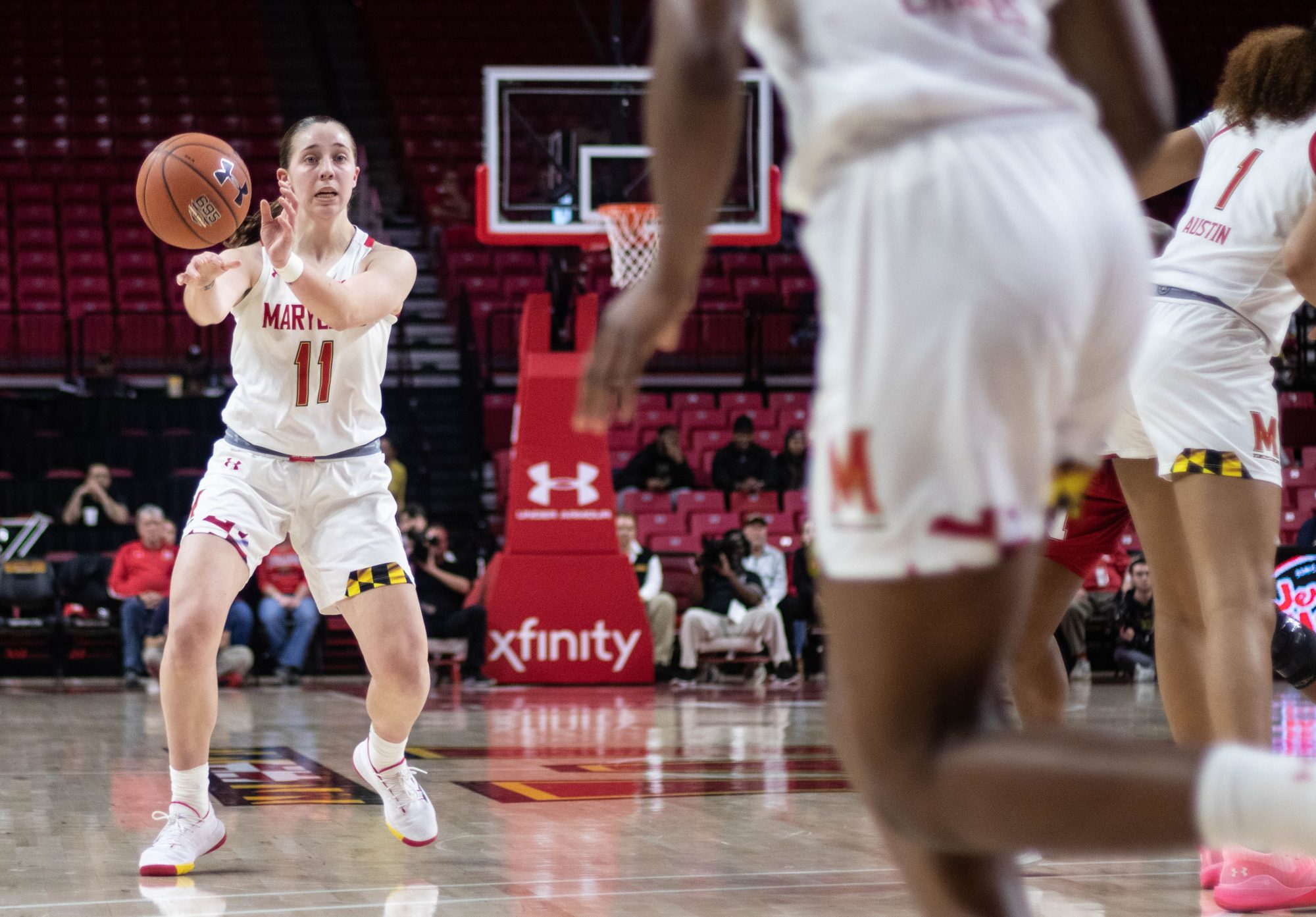 Guard Taylor Mikesell dishes off to a teammate from the point during Maryland basketball's 87-69 win over Nebraska on Jan. 16. 2020 at Xfinity Center. (Julia Nikhinson/The Diamondback)

Guard Taylor Mikesell took the Big Ten by storm a season ago, hitting more triples in a single season than any Maryland women’s basketball player had before her en route to multiple All-Big Ten and Freshman Team honors from the coaches and media.

But that success hasn’t seamlessly carried over in her second season, as she’s experienced a multitude of highs and lows offensively despite making significant strides on the other end of the floor.

Mikesell had only seven single-digit scoring efforts last year. This season, she’s already had nine such performances, in 16 fewer games. She’s also gone scoreless in two outings after not doing so in any contest as a freshman.

And since the start of conference play on Dec. 28, Mikesell failed to score in double figures in six consecutive outings and shot just 8-for-34 from behind the arc prior to Monday night’s win over No. 17 Indiana.

In that game against the Hoosiers, however, she tallied 16 points, four triples and a career-high eight assists to help cap her team’s best three-game stretch of the year. In doing so, she not only bucked her shooting woes — she put forth her most well-rounded effort from the point guard role.

“How she was feeding the post and just making the right plays inside and out. And it was no surprise when [her shot] opened up,” coach Brenda Frese said. “I thought it was one of her most complete games, offense, defense, assists. That kind of separates us as a team.”

Part of Mikesell’s struggles can be attributed to the Terps’ lack of guard depth. While Maryland entered the season with a mix of young and experienced players at the point and shooting guard positions, the team’s most veteran ball-handler — Channise Lewis — tore her meniscus shortly before the start of the season, and was later ruled out for the year.

With freshman guard Zoe Young also out for the season with a torn ACL, Mikesell was thrust into the backup point guard role — in addition to being the starting two-guard, behind freshman Ashley Owusu.

While Owusu began the year strong, she’s cooled off as of late, so Frese decided to experiment with her coming off the bench and sliding Mikesell to the starting point guard spot. Already struggling to find consistency with her shot due to the increased ball-handling responsibilities, it was unclear how the Ohio native would respond.

But in her fourth game in the new role, Mikesell broke through with her best performance since the start of Big Ten play. She found her shot early, created easy looks for her teammates and had the crowd behind her on throughout.

“Just getting real comfortable [at the point guard position]. Just kind of seeing the pace of the game and who’s hot at what time,” Mikesell said. “[Our seniors] started us off really hot so just going to them, calling plays for them and just letting the flow of the game happen and whenever I get a shot I’ll take it, but just playing through my teammates.”

Averaging fewer points and assists this season, Mikesell always takes it one game at a time. If she misses a shot, she doesn’t hesitate to pull up again and always echoes a team-first mindset when talking about her mentality as a player.

Her transition into an initiator of the offense rather than a scorer is still a work in progress. The need for her to be in that role come March might cost her team a perimeter threat at times, but her willingness to adapt to what her team needs sets the kind of example Frese is looking for.

The Terps have altered the starting lineup multiple times this season in the hopes of finding a consistent winning formula with just nine players active. Mikesell and star forward Kaila Charles are the only two to start all 18 games thus far, so it’s clear Frese trusts her to keep progressing as a primary ball-handler.

“It’s just like the ultimate sacrifice. The selflessness to run the team first before worrying about [her] offense,” Frese said. “That’s why it was really, really cool to see [against Indiana] because I thought, gosh, her passing was at another level.”