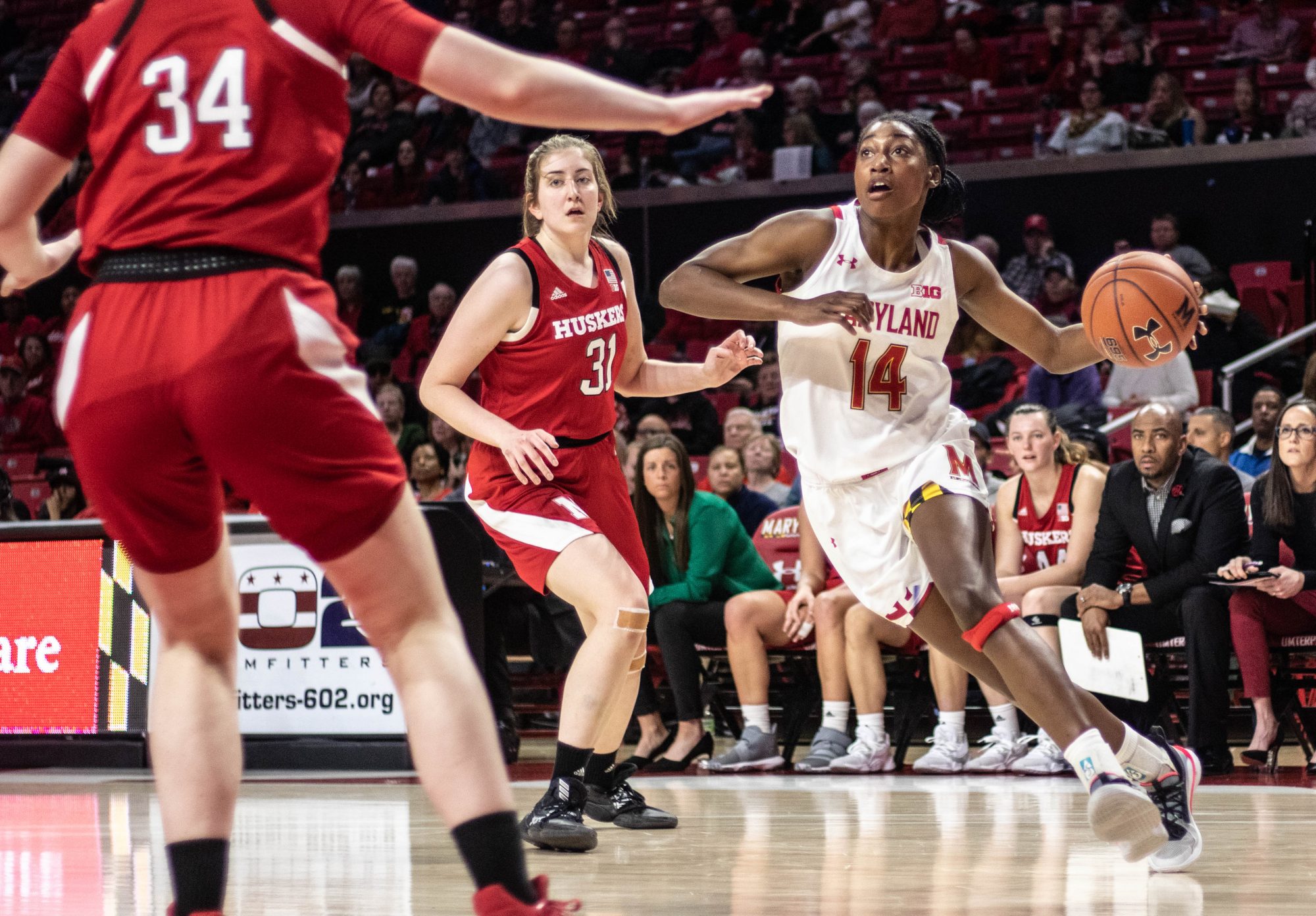 Falling behind six points early, Maryland women’s basketball searched for a spark to avoid yet another disappointing loss to a Big Ten opponent.

But similar to the Terps’ last win at Michigan, freshmen guards Ashley Owusu and Diamond Miller entered the game midway through the opening period and provided youthful energy to take control of the contest.

Behind their activity, a season-low seven turnovers and 23 points from star forward Kaila Charles, Maryland beat Nebraska, 87-69, at Xfinity Center on Thursday night to earn the team’s first back-to-back wins during Big Ten play this season.

“The play of both Diamond and Ashley have really helped propel us to take a step forward,” coach Brenda Frese said. “That energy off the bench has been huge for us.”

The Terps got off to a slow start, though, falling behind 10-4 in the game’s opening minutes despite Frese utilizing her team’s signature press defense early.

She once again kept Owusu out of the starting lineup, a move that worked well in the team’s 77-49 win over the Wolverines on Sunday. But with Owusu on the bench, Maryland struggled to penetrate the Nebraska defense and settled for mid-range jumpers instead.

Once Owusu and Miller entered the game at the quarter’s midway point, the momentum flipped to thrust the Terps into the driver’s seat. The two brought elevated energy and pace to the contest, combining for 14 points in the period and securing their team the lead.

“I think [the game] is slowing down,” Miller said. “Freshman year is a lot of ups and downs, so I’m just going to take it one game at a time.”

Nebraska guard Nicea Eliely kept her team in the game early, scoring 10 of her team’s 17 points in the period. But once Maryland began to thwart her efforts in the second frame, her team rarely got clean looks on offense.

While the freshman bench tandem cooled off in the second quarter, Charles found her rhythm. She notched eight points and fed off seven Cornhuskers turnovers as she and her team pushed the ball in transition.

Despite dominating in most statistical categories and controlling the game’s tempo for much of the half, Frese’s squad found itself up only nine points at the half. Nebraska’s six triples kept them within striking distance while the Terps hit only two shots from behind the arc.

Maryland lost the rebounding battle by four in the first half, but the Terps grabbed a couple offensive boards out of intermission and earned second- and third-chance points early on.

As the frame progressed, however, the team slowed down, shooting 35.3 percent from the field and missing all four attempts from behind the arc. Guard Blair Watson, one of the team’s best shooters, struggled mightily to get a shot to fall all night and missed all six of her long-range attempts.

Nebraska forward Leigha Brown exploded in the third period for 11 points, taking advantage of a drop-off in defensive intensity and discipline.

“I think it was a lapse on defense,” forward Stephanie Jones said. “The whole game we were pretty locked-in on defense. I think it just comes down to our communication and I think we were a little bit tired and didn’t necessarily get out on the switches or … close out on her long enough.”

With the lead cut to six to start the fourth, Maryland leaned on forward Shakira Austin as an outlet, with post-up moves creating opportunities for herself and her teammates.

She had three points and two assists early in the frame, finding a cutting Owusu multiple times for easy layups and giving Nebraska trouble in the paint. While she struggled with turnovers early in the contest, she quickly helped extend the lead back to double-digits in the fourth.

Behind Austin and Owusu’s production to start the final frame, Charles and Jones put the game away. Jones, who scored most of her 14 points from mid-range, took advantage of mismatches inside, and Charles continued to out-hustle the opposition for second-chance buckets.

Even with another poor performance from behind the arc — Maryland made only two 3-pointers until late in the fourth quarter — the Terps ran away with the game by routinely getting to the rim.

Multiple players chipped into what became a true team win, and it was one of the first since the start of Big Ten play in which Charles and the freshmen guards all played well offensively.

“I love where we’re trending. When you talk about the young play that we have and the spark and the talent now that we’re getting off the bench, that’s huge,” Frese said. “Diamond and [Owusu] are playing harder than they have all season. I think it’s all kind of coming together, slowing down for them and you see the impact that they’re having for us.”