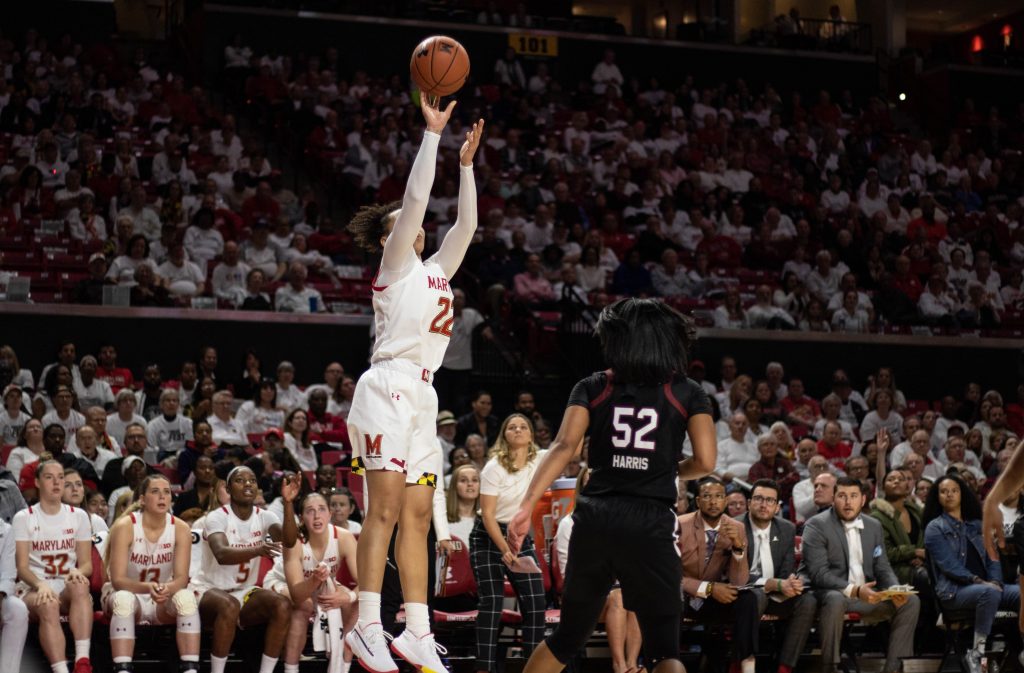 Coming off her best stretch of the season that began with a 20-point double-double in her last matchup against Michigan, Kaila Charles seemed destined to once again be at the forefront of her team’s offensive attack in Sunday’s rematch.

But it was the guard tandem of Ashley Owusu and Diamond Miller off the bench that set the tone for No. 17 Maryland women’s basketball, attacking early and breaking the Terps’ recent trend of slow starts.

Behind their activity and guard Blair Watson’s 20 points, Maryland won at the No. 24 Wolverines, 77-49, on Sunday to sweep the season series.

“I told them in the locker room, just really proud of their response, their resilience,” coach Brenda Frese said. “I thought they just took great ownership of how hard it is to win on the road and came out ready to fight, and that’s what you want to be able to see from your team.”

Both teams started slow, with Michigan forward Naz Hillmon’s opening layup serving as the only points in the first two and a half minutes.

With the Terps coming off a deflating defeat to Iowa on Thursday and the Wolverines looking to rebound from their loss in College Park on Dec. 28, it was apparent the players were tense to begin the contest.

But unlike in the last several games when Charles led the way for Maryland offensively, it was the struggling freshmen Owusu and Miller who grabbed control for the Terps.

The two combined for 15 of the team’s 21 points in the opening period, attacking the basket more aggressively than they had since before the start of conference play and capitalizing on Michigan’s six first-quarter turnovers.

The duo cooled off a bit in the second frame, but their impact gave their teammates something to build on. After poor three-point shooting performances from Watson and guard Taylor Mikesell as of late, the two combined for three triples in the quarter to help extend the lead to 16 by halftime.

“I think the depth off our bench was critical. With Ashley and Diamond, those are the minutes that we’ve been searching for,” Frese said. “Just really excited to see how well they were able to play for us off the bench.”

Maryland’s defense was staunch in the second period, forcing Michigan into eight more turnovers and allowing only two players to score all of the opposition’s nine points. The Terps looked more in control on that end and stayed patient against the Wolverines’ 2-3 zone by either penetrating and assisting out to open shooters or delivering quick passes along the perimeter that set up driving lanes.

Although Hillmon re-emerged with nine points in the third, Maryland was able to keep Michigan at bay by containing their guards and getting to the line.

Owusu continued to attack, scoring six points and dishing two assists in the frame. She repeatedly blew by Wolverine guards and drew contact on her way to the rim, knocking down all four of her free-throw attempts despite shooting just 62.7 percent from the charity stripe on the season.

Watson also continued to have the hot hand from deep in the second half. Michigan couldn’t keep track of her defensively, allowing her to hit two triples in each of the final two periods — shots that typically rip the heart out of the opposition searching for momentum.

“[We were] just trying to stay in the gaps and work around the bottom of the zone … then Shakira [Austin] found me in the corner a couple of times and I just knocked it down,” Watson said. “Then we just started flowing off of that and took the energy out of the gym and took it for us and just rolled with it.”

Despite tallying a team-high 18 points in the teams’ meeting, Michigan guard Amy Dilk was held in check by the Terps throughout. She finished with two points on 1-of-9 shooting, neither penetrating or getting clean looks from the perimeter and struggling to initiate the Wolverines’ offense.

While Charles also couldn’t match her offensive output from the previous matchup, either, she provided much-needed rebounding to help her team narrowly win the battle on the glass by five. She once again played with toughness and relentless energy, this time allowing her teammates to successfully run the offense without her involvement.

Michigan took better care of the ball in the second half, and Maryland’s inability to stay out of foul trouble gave the Wolverines opportunities to make it a close game, but almost every mini-run was ended by a Terp 3-pointer.

A 9-0 run by Michigan cut the deficit to 16 midway through the fourth, but the Terps never wavered and cruised to their most decisive victory since the two squads last met.

“It’s awesome because you can see that we’ve been struggling a little bit, but this game kind of boosted our confidence — especially for our freshmen,” Watson said. “They came out and had a huge night, and got to give it up to Ashley and Diamond because they did what they did … so I think it was just a great night overall.”