Kaila Charles takes over to lead No. 17 Maryland women’s basketball past Ohio State, 72-62 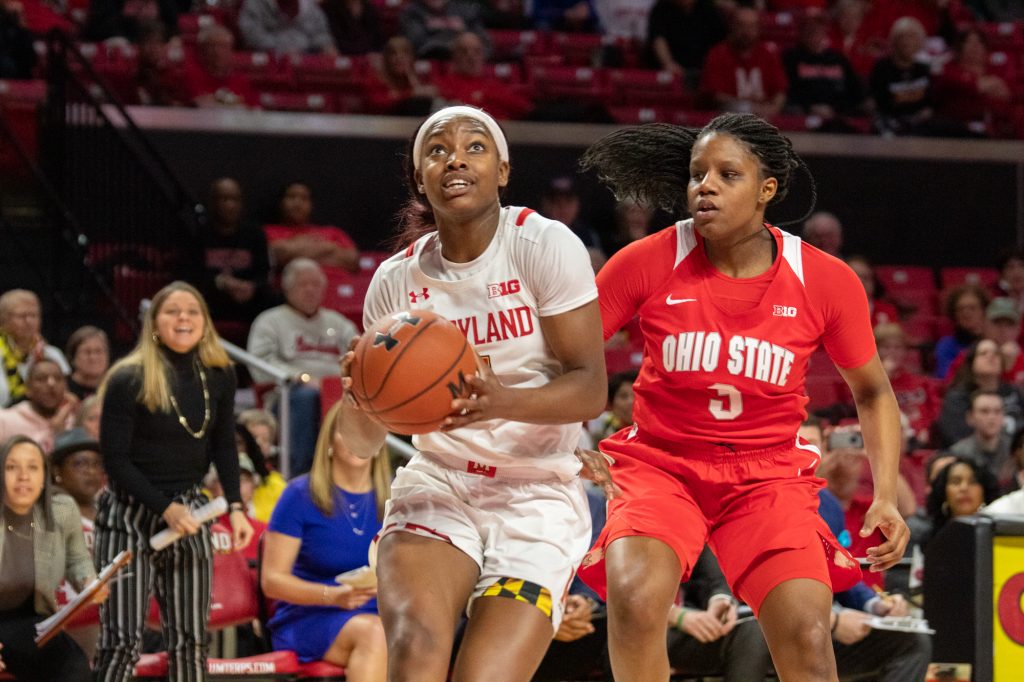 Kaila Charles watched most of the second quarter from the bench with two fouls as Maryland women’s basketball saw the game slipping away.

Coming off a disappointing loss to Northwestern, the Terps entered halftime down seven against Ohio State in need of an answer to the Buckeyes’ 56.7 percent shooting to avoid another letdown defeat.

Charles provided that answer out of the break, erupting for 18 second-half points and leading the way for Maryland to take control of a game that was up for grabs.

Behind a season-high 28 points from Charles and hounding second-half defense, the No. 17 Terps pulled away to top Ohio State, 72-62, at home on Monday night in the team’s third Big Ten matchup of the season.

“I loved the response coming out of the locker room. Obviously I challenged our team at halftime because I didn’t really feel their energy, specifically on the defensive end,” coach Brenda Frese said. “Kaila, being the All-American that she is, [was] just making plays for us.”

Charles came out of the gate firing, scoring 10 of Maryland’s first 16 points all from layups.

The Buckeyes countered her efforts by hitting four triples in the period, three of which came from the right corner.

Charles’ hot hand and Ohio State’s early efficiency set the tone for a half that doubled as a track meet. Both teams played a run-and-gun style that resulted in a combined 49 points on 61.8 percent shooting in the opening frame, with neither squad providing much resistance on the defensive end.

When Charles exited in the second quarter with two fouls, however, the Terps failed to manufacture consistent offense.

Several possessions ended in head-scratching passes that went the other way or sloppy dribbling that gifted the ball to Buckeye defenders. The Terps finished the period with eight turnovers and 11 points.

“Sometimes we get so kind of inner-focused that we’re afraid to make mistakes, so I kind of felt some of that to start the game,” Frese said. “I thought we felt flat, again, which made me a tad bit nervous going in.”

Ohio State didn’t fare much better, though. While the Buckeyes did score 17 in the frame, nine turnovers allowed Maryland to stay within striking distance down seven at the half.

Maryland failed to hit a triple in the first half for the third-straight game, missing on all four attempts. While guard Blair Watson was able to find points in other ways, guard Taylor Mikesell went scoreless in the opening 20 minutes despite averaging 11.2 points per game entering the contest.

But the game changed when Frese employed Maryland’s signature full-court trap to start the third quarter. The pressure altered the pace of the game and appeared to fluster the Buckeyes’ guards as the Terps forced 12 turnovers in the period.

Charles’ return to the court from foul trouble, coupled with the reinvigorated defense, led the comeback that saw Maryland end the period up two points. Between her eight points and Watson’s four steals, Maryland regained control of the contest.

“Coach really challenged us at halftime to make a statement and punch first in the third quarter,” Charles said. “That’s what we did, we kind of just walked it back to the basics of who we are and we were ultimately able to lock-in.”

With the game in the balance, it was fitting that Charles, a preseason All-American and Big Ten Player of the Year, exploded to help her team finish-off a dangerous Ohio State team with 10 points in the final frame.

She nearly outscored Ohio State in the second half, putting up 18 points to the Buckeyes’ 20 and displaying elite energy that her opponents couldn’t match.

Despite sloppy play and uninspired defense in the first half, Maryland rallied behind Charles and its attacking defensive mentality to earn a bounce-back victory at home.

“[We’re] always trying to get Kaila the ball because we know that she’s a scorer and that she can always take whoever is in front of her,” said Watson, who tied her career-high with seven steals. “She’s always there for us and she’s always giving 100 percent. … We’re really lucky to have her.”