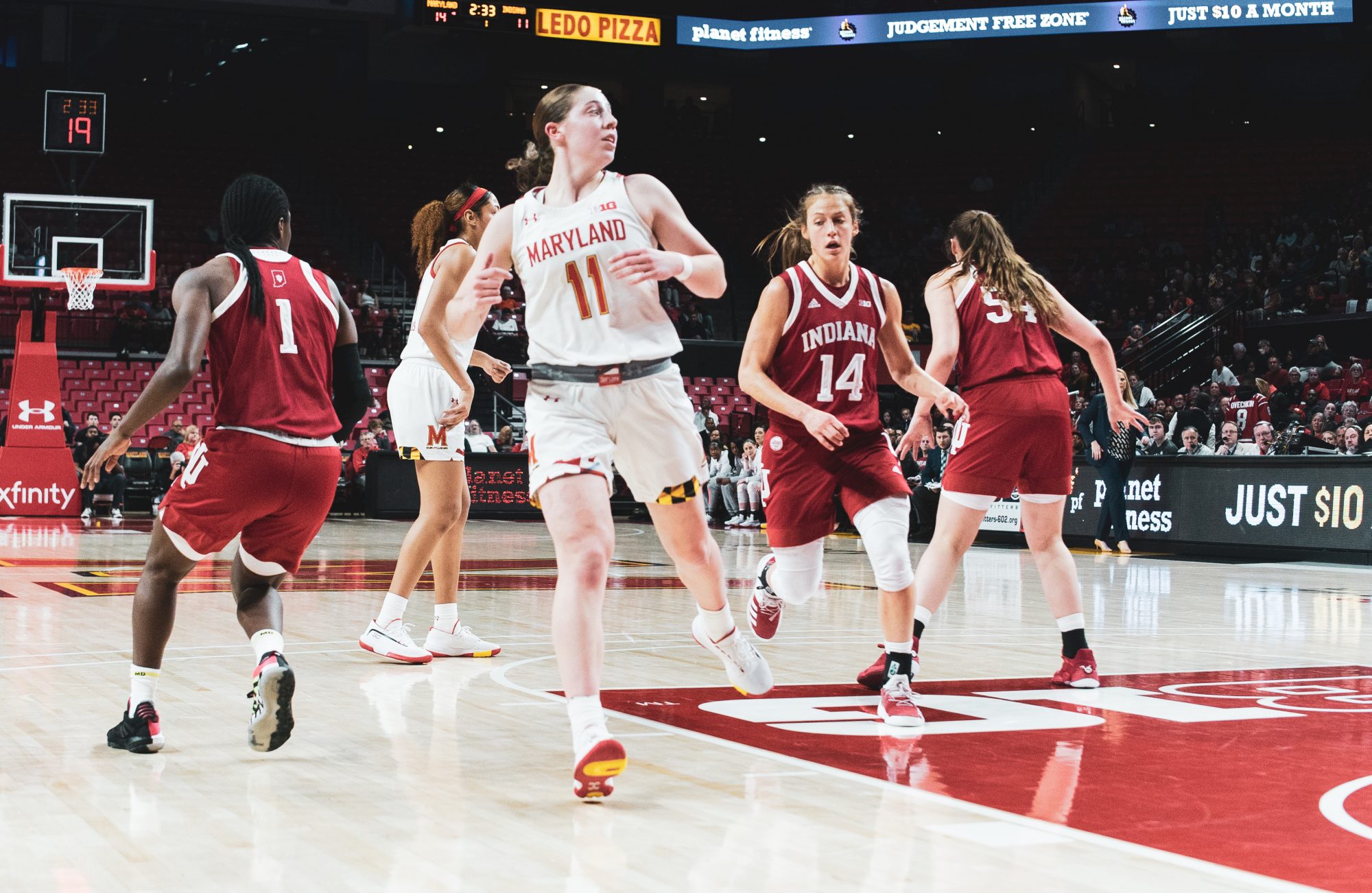 Not having scored in double-digits in over a month, Taylor Mikesell’s perimeter scoring threat had been a missing piece in an inconsistent stretch of offense for Maryland women’s basketball.

But in her team’s first game this season ranked lower than its opponent, the sophomore regained her confidence to help the Terps secure an early lead that they never relinquished.

Behind her 16 points and a career-high eight assists, No. 20 Maryland defeated No. 17 Indiana, 76-62, at home on Monday night for its third consecutive victory.

“The mindset that we had, the effort and the energy defensively was really, really good. I thought that was the difference in the game. We played hard for 40 minutes,” coach Brenda Frese said. “That was Taylor’s best floor general game, just making the right reads and passes.”

Maryland (14-4, 5-2 Big Ten) came out swinging, beginning the game with an 8-0 run and using its signature full-court press to catch the Hoosiers (14-5, 4-3) off guard. Forward Kaila Charles and guard Blair Watson each notched a steal and score, bringing the Xfinity Center crowd to a roar and forcing Indiana to regroup.

Out of the Hoosiers’ timeout, guards Jaelynn Penn and Grace Berger stole some momentum, scoring back-to-back buckets to stop the bleeding and help their team cut the deficit to one point by the end of the frame.

The battle would be short-lived, however, as Maryland’s defense regained form to help take control of the contest. After an initial and-1 layup to start the quarter, Indiana struggled to even get the ball past half court against the Terps’ press.

“I thought we were wearing them down,” Frese said. “I thought [in] our defense and our transition, we just stayed really patient in the game.”

Once Maryland forced a 10-second violation in the period’s first couple of minutes, it went on an 18-3 run to close the frame. The team forced the Hoosiers into seven turnovers and just 20 percent shooting, making every possession a struggle while getting easy looks on the other end.

Mikesell invigorated the arena with a pair of triples in the frame — two of her four on the night — to buck her shooting struggles in Big Ten play this season, where she sank just 8-of-34 deep attempts entering Monday’s contest. Her passing and hustle were also on display, securing numerous loose balls and tying her season-high of six assists in the first half alone.

Out of the halftime break, forward Shakira Austin found her groove. She erupted for 14 straight points as Indiana’s bigs simply couldn’t match her size and energy inside. When she wasn’t scoring from the post, she was getting to the line — where she made all six of her attempts in the quarter.

This came after a half in which she missed all three of her shot attempts and had just a single rebound in 13 minutes. But, as she has throughout the season, she was able to shake off a rough start.

“The first half was pretty frustrating, just not being able to see the ball go through the hoop and just having so many turnovers and feeling like I couldn’t contribute to the game,” Austin said. “So the second half [I was] just washing all the first half away and playing with energy … just being aggressive and knowing no one can stop me.”

Berger tried to help manufacture a run near the end of the frame, but her team’s defense continued to be a step behind the Terps. Mikesell’s third triple near the end of the period brought the home crowd to its feet, effectively putting the game away.

With a 20-point lead heading into the final period, Maryland coasted to victory behind efficient scoring from Mikesell, Charles and Austin. The Terps shot 53.8 percent as a whole in the frame to help maintain the lead despite Berger and guard Ali Patberg combining for 19 points.

Despite the seniors and freshmen guards leading the way as of late, it was the sophomore pairing of Austin and Mikesell that lead the Terps on Monday to their third win against a ranked opponent this season.

“I think we’re starting to put the pieces together,” Charles said. “I love the fact that we have the freshmen stepping up and the sophomores stepping up because, if we want to go really far in our season, we’re going to need everybody.”