After poor shooting display, Eric Ayala hasn’t given up. Neither has Maryland basketball. 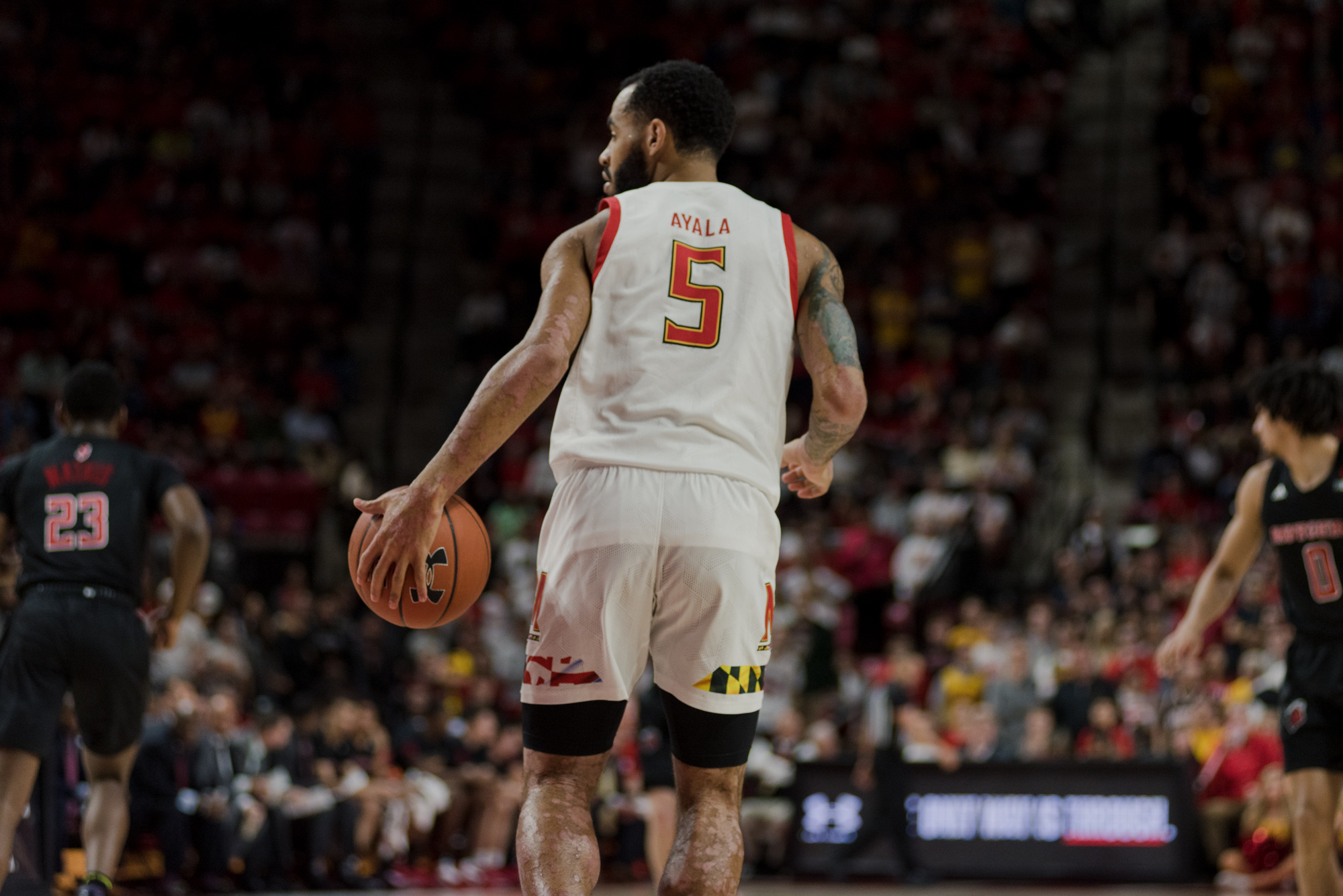 Only an hour or so earlier, when the stands had been full, these shots hadn’t been falling.

So he returned to the court, long after the hordes of Maryland men’s basketball fans had vacated Xfinity Center. His dribbles echoed through the arena. The sweet swish of made threes pierced the silence, and the only noise in his ears was from his headphones — instead of the 15,855 cheering fans, pushing the Terps to a 56-51 win over Rutgers.

This was Eric Ayala at 10 p.m. Tuesday night. This was Eric Ayala repeating his shooting mechanics again and again. With an occasional word of affirmation from assistant coach Matt Brady, shot after shot by Ayala struck nylon and triggered that sweet swish once more.

Earlier, Ayala hadn’t been nearly as fruitful. He went 0-for-6 against the Scarlet Knights, continuing a stretch of shooting woes that struck midway through his sophomore year. But as he knocked down attempts after most of the watchful eyes had departed the arena, Ayala felt his touch might be back — a positive development as Maryland plays Illinois on the road Friday, in a matchup of the Big Ten’s top two teams.

“He said he figured it out,” coach Mark Turgeon said. “We’ll see. You know, it’s amazing. I never thought a team wouldn’t guard Eric, and [Rutgers] didn’t. I think that’s going to be a blessing for us in the end.”

While Wiggins suffered from his own short-lived slump in early January, the Greensboro, North Carolina, native seems to have found his way once more.

Ayala hasn’t. He last reached a double-digit point tally on Dec. 10, when Maryland lost to Penn State. Over his next 11 games, the IMG Academy product has averaged 4.72 points per contest, and his three-point percentage has fallen to 24 percent.

After Ayala’s latest display — held scoreless for the first time since Feb. 23, 2019 — a reporter asked guard Anthony Cowan about those scoring shortcomings. Cowan peered down at the stat sheet laying on the table in front of him, slid his finger along Ayala’s line and called out the redeeming qualities of Ayala’s night.

“He struggled, but he’s also had four assists, one turnover and six rebounds,” Cowan said. “So he contributed.”

[Read more: Maryland men’s basketball needed Darryl Morsell to close out vs. Rutgers — and he did]

That’s why Ayala’s role hasn’t diminished; he still played 30 minutes against the Scarlet Knights, despite going 0-for-4 from long distance. And it’s that kind of production his teammates appreciate — creating opportunities for others rather than wallowing in his own issues.

“Eric’s done everything we need him to do,” Wiggins said. “We know the scoring will come to him.”

After Tuesday’s matchup, Turgeon showed Ayala a play that occurred late in the contest. Wiggins was in the corner and opted to take the three himself. There could’ve been — should’ve been, in Turgeon’s mind — an extra pass, swinging the ball to an even more open player.

But Ayala wasn’t up against the three-point arc, ready to catch and shoot. Ayala wasn’t yelling for the ball, either. And to Turgeon, that displayed the starkest contrast between Ayala’s freshman and sophomore campaigns.

“Last year, he would’ve been yelling at Wigs to throw him the ball,” Turgeon said. “That’s the Eric I want. And if we get that Eric back — whether he makes them or not — we’ll be a better team.”

So Ayala returned to the floor after his team dispatched Rutgers, back to the spots where he had pulled up and missed. There were no voices then, only the music in his ears.

His teammates and coaches believe the shots he made there will translate to games soon, though, and all the noise surrounding him from the full stands will be cut through by that sweet swish, a momentary hush before the arena erupts once more.