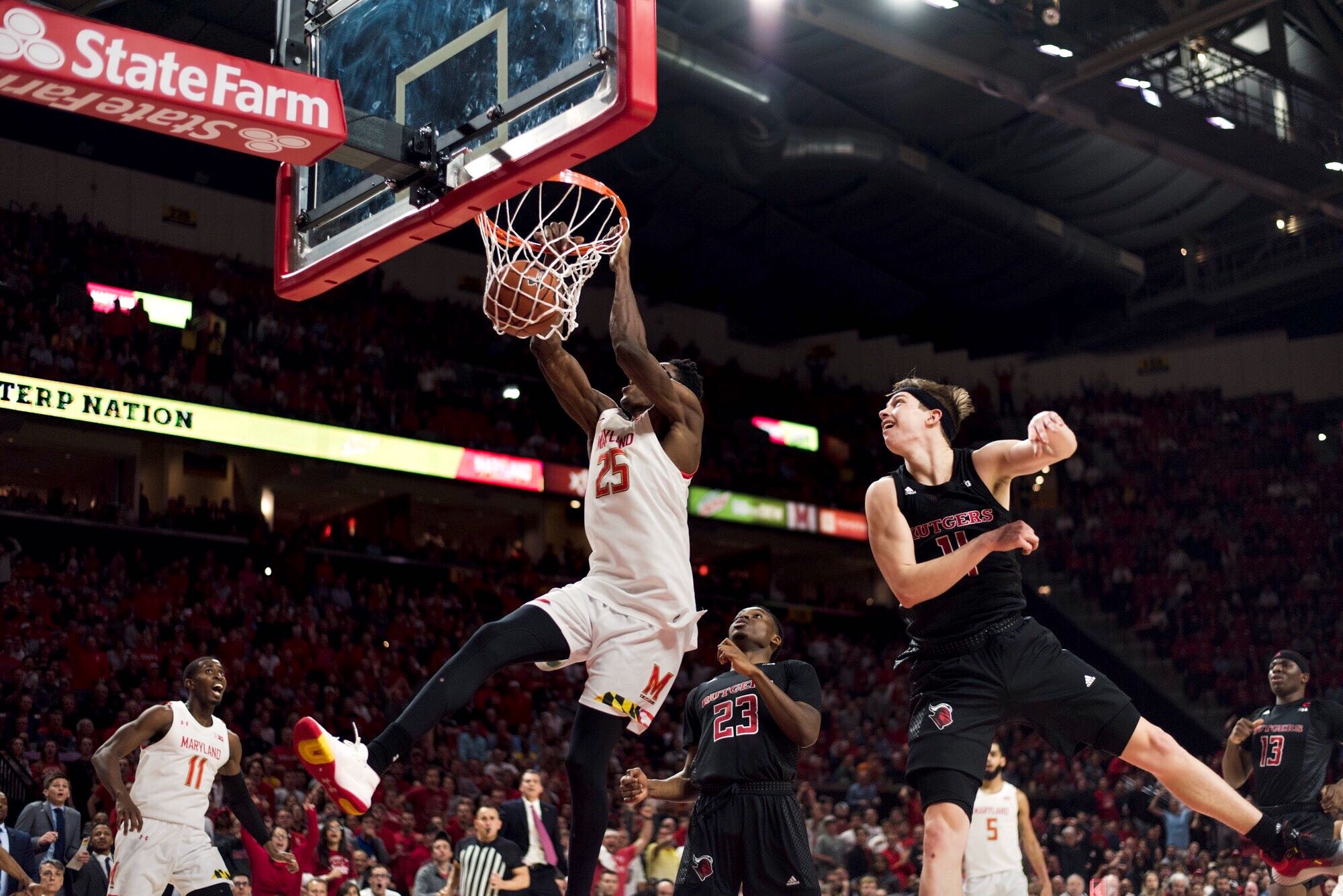 Forward Jalen Smith hangs on the rim after a thunderous dunk during Maryland men's basketball's 56-51 win over Rutgers on Feb. 4, 2020, at Xfinity Center. (Gabby Baniqued/The Diamondback)

As Jalen Smith hung onto the rim, Xfinity Center erupted around him.

Before then, it had been more subdued than normal, a side effect of an extended scoring drought to end the first half. But when Smith — finally ending a streak of misses that extended for about 20 minutes — followed his 3-pointer with an and-1 slam about six minutes into the second half, there was finally reason to jump around again.

There had been the ugly moments — the first half, mainly. But despite the poor shooting and turnovers that helped Rutgers embark on a 19-6 run to end the period, the Terps were only down five at intermission.

And after Smith’s six straight points midway through the second, Maryland never trailed the rest of the way, pulling out a 56-51 victory to remain undefeated at home and ensure the Scarlet Knights wouldn’t manage their first victory over coach Mark Turgeon’s team since joining the Big Ten.

For Maryland (18-4, 8-3 Big Ten), the struggles toward the end of the first half weren’t present at the start. Smith forced a turnover on one end and then sank his first shot of the night — a straight-away 3-pointer — before adding another triple about a minute later. Cowan and Morsell hit from deep, too, and the Terps’ lead swelled to eight.

But then Maryland managed just six more points in the final 12 minutes before intermission, and Turgeon called timeout in an attempt to slow down Rutgers’ 17-4 run. During that stretch, forward Akwasi Yeboah sank three times from long range, part of his team-high 13 points.

Even after all that, after 11 straight misses and five turnovers and Aaron Wiggins missing the front end of a 1-and-1 opportunity, Maryland was right there.

“Coach Turgeon told us we shot like 24 percent in the first half, but we’re still down five,” Smith said. “That gave us a lot more energy.”

This was a game that could have been decided over that 9:21 stretch without a field goal to end the first half, requiring two free throws from Cowan to serve as the Terps’ lone points in an otherwise dismal run of 16 putrid possessions. Instead, it was as if both rims grew lids as the frame came to a close. So even after 11 straight misses from Maryland, it wasn’t as if Rutgers (16-7, 7-5) did much better.

Neither side scored from the field during the final five minutes of the first period, and neither team managed more than .76 points per possession during the first 20 minutes. That offered the Terps some wiggle room. Nothing about that first half — the 24 percent shooting, the 2-for-14 combined mark from Eric Ayala, Morsell and Wiggins — suggested a win would materialize from it.

But that win came nonetheless, in the form of a second-half comeback effort from Maryland.

Morsell — who finished with 14 points despite shooting 1-for-5 in the opening period — cut the deficit to one with his second dunk in under two minutes.

That set up Smith’s third 3-pointer of the game and his three-point play on a slam, the one that brought the Xfinity Center back to full voice. He and Morsell had combined for 12 of the half’s first 14 points, breathing life back into a team that had looked listless at moments earlier.

And despite a more muted offensive role, Smith finished with his 13th double-double of the campaign, providing 14 points and 15 rebounds.

“When he’s shooting the ball, he gives a whole nother dimension to their offense,” Rutgers coach Steve Pikiell said. “And obviously, he’s an elite shot-blocker. When you ever have a rim-protector like that, you know, what a valuable player to have.”

With eight minutes to go, however, Cowan was the lone scorer for the Terps, racking up a major chunk of his team-high 17 points. He sank two threes and all five free-throw attempts. Even so, what was an eight-point edge whittled down to a tie ball game.

But nine free throws and stout defense sealed the deal — featuring Smith’s career-high sixth block with just under a minute to play.

There have been better performances, particularly at home, yet the Terps still fended off a scare. So when Turgeon arrived at the lectern after the contest, he opened with the bright side.

“A great college basketball game if you like defense,” he said.

Because the scoring was certainly at a premium.