Maryland men’s basketball needed Darryl Morsell to close out vs. Rutgers — and he did 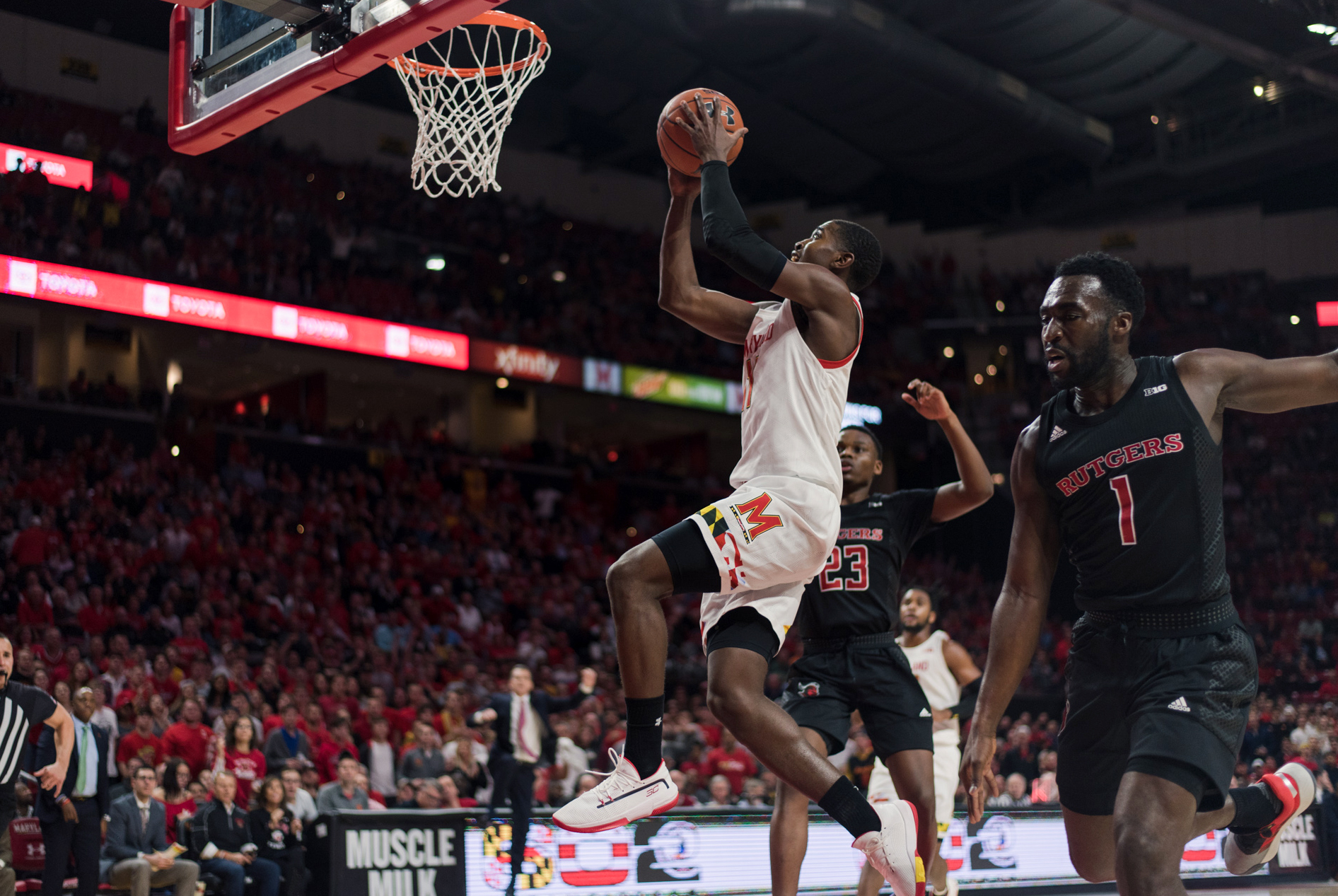 The trio of team leaders wanted the junior to elevate his game in the second half. Up to that point, Morsell had shot just 1-for-5, committing two turnovers.

Morsell responded with 11 points — including a soaring dunk that ignited the team’s 12-2 run to take a second-half lead — on 4-for-5 shooting.

“I got challenged by some coaches, some veteran guys,” Morsell said. “And I just tried to step and accept that challenge.”

Maryland primarily relies on Morsell for his ability to defend the opposition’s top perimeter scorer, but also depends on him to make smart decisions and finish layups on the offensive end. That wasn’t the case in the first half, as Morsell missed four layups around the rim.

“I don’t know what was going on in the first half,” Morsell said. “I’m missing layups — the rim’s blocking my layups.”

The struggles around the rim didn’t deter Morsell, though. He just went to the rim with a different approach, looking to elevate for dunks amidst traffic instead, as he did for the first basket of the Terps’ early second-half rally.

After a block from forward Jalen Smith on the ensuing defensive possession, Morsell capped off the fastbreak opportunity with a layup, forcing Rutgers coach Steve Pikiell to call timeout. While the Scarlet Knights walked toward their bench, Morsell took the time to flex at center court.

“He got to the rim,” Turgeon said. “His energy level was different, his attitude was different. It’s really that simple.”

The 6-foot-5 guard isn’t known for his offensive effectiveness, and opposing teams oftentimes opt to sag off of him while he’s on the perimeter. But when Morsell’s playing to his strengths of slashing and finishing around the rim, his offense gives the team a welcomed boost, especially in a defensive-dominated game such as Tuesday night.

“We know that Darryl’s our energizer. He starts our defense, and if he gets his offense going, it’s just amazing,” Smith said. “That just helps us down the long run.”

With less than a minute remaining, Morsell was forced to be that catalyst once more.

After Smith blocked his sixth shot of the night, the ball bounded high into the air. Morsell elevated — snagging one of his five rebounds on the way there — before Rutgers guard Caleb McConnell knocked him to the floor.

As Morsell played the final minute of a full 20-minute shift in the second half, the junior began to cramp up. He hopped off the floor, refusing to put any weight on his left leg as he made his way to the team huddle during a timeout.

But after the brief timeout, Morsell returned to the floor, taking the requisite free throws. He made one of two at the line, before making two more free throws and grabbing another pivotal rebound to help seal the victory.

“Everybody challenged him at halftime,” Cowan said. “And he came out, and he gave us everything he had.”