How Tyler, the Creator earned the respect of the Grammys 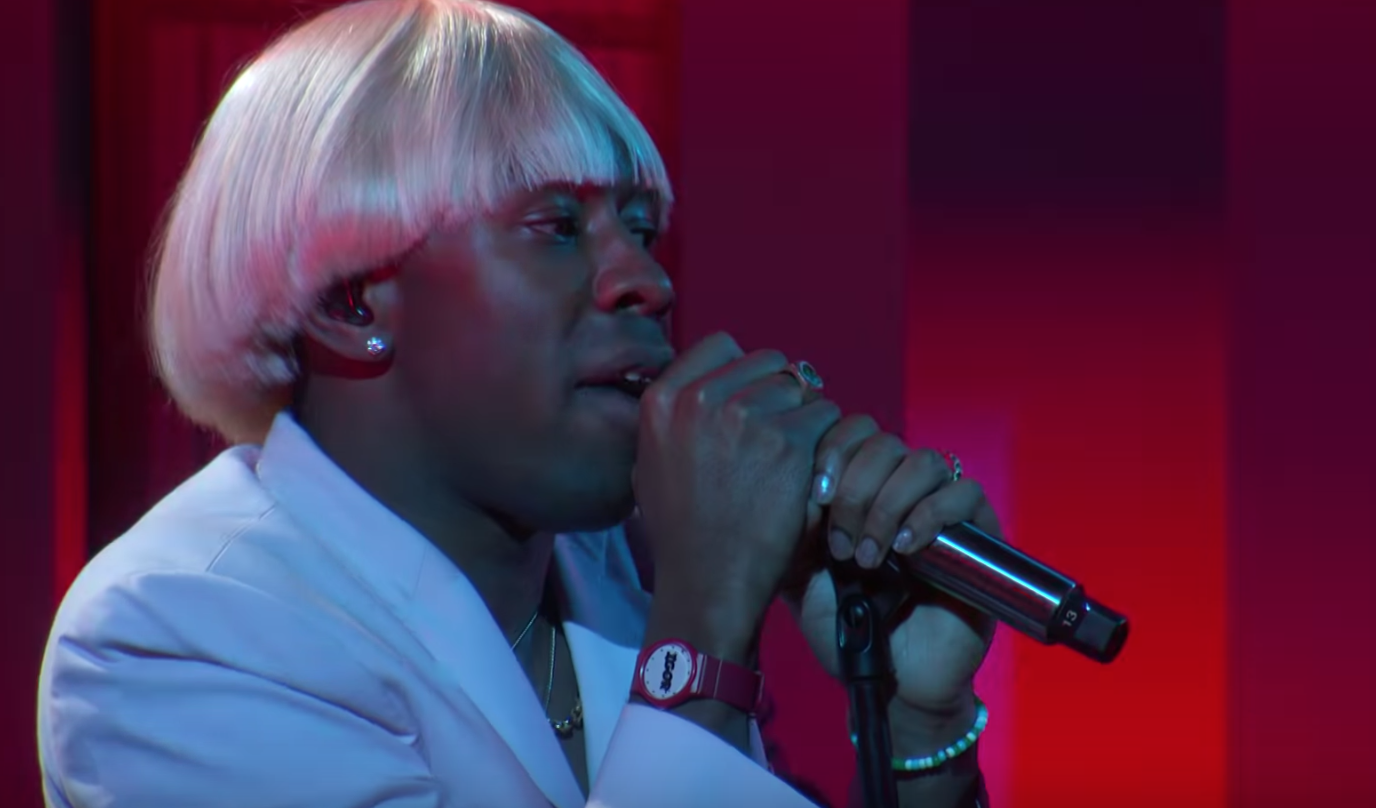 Tyler, the Creator performing at the 2020 Grammys. (Photo via YouTube)

From fashion to music to film, Tyler Okonma — better known as Tyler, the Creator — seems to progress and influence consistently with each new drop.

In his early days, solo projects like Bastard and Goblin alongside group work with former rap collective Odd Future defined his public persona as grungy and anarchist. 2015 marked a notable shift in musical output and a sense of vulnerability with the release of Cherry Bomb, which had songs ranging from pop to metal with some R&B in the mix. His subsequent Flower Boy album showed him in full bloom, perfecting the pop-rap sound and further diversifying his discography.

Unfortunately, this evolution has been typically overlooked by the Recording Academy, the council of executives that puts on the Grammys. IGOR, Tyler’s latest full-length release, is a mélange of punk and pop with brief rap verses sprinkled here and there, yet it was nominated for — and won — Best Rap Album on Jan. 27.

[Read more: I binged 13 shows over break and it was exhausting]

To label it a rap album would be considered profiling, an ignorant deeming of genre by those who didn’t truly listen. An institution that should be priding itself on recognizing and promoting culture-shifting, genre-bending artists is instead pigeon-holing those who don’t fit neatly into one category … into just that.

After the show, when asked about rumored misconduct in the Academy’s voting process (i.e., bolstering artists with whom council members had previous relationships) Tyler focused on the issue pertinent to his album’s categorization.

“Whenever we, and I mean guys that look like me, do anything that’s genre-bending, they always put it in the rap or urban category,” Tyler said “I don’t like that urban word; it’s just a politically correct way to say the n-word. Why can’t we just be in pop?”

To cut the Recording Academy a bit of slack, their choice of primary performer for the night was admirable. Tyler performed “EARFQUAKE,” the bright, chart topping IGOR hit complete with help from Boyz II Men and Charlie Wilson, then transitioned into “NEW MAGIC WAND,” an edgy plea for requited love that set literal fire to the stage.

The irony of the council’s selection was indisputable as Tyler performed a set so sonically and melodically contradictory to the rap category in which he was placed.

Fellow artist Kanye West, spoke out at a 2015 Grammys after-party under similar pretenses to “fight for creativity.”

“If they want real artists to keep coming back, they need to stop playing with us,” West said “Because what happens is, when you keep on diminishing art and not respecting the craft and smacking people in their face after delivering monumental feats of music, you’re disrespectful to inspiration.”

These comments came in response to multiple Beyoncé award show snubs, beaten out by white artists — Taylor Swift at the MTV Video Music Awards in 2009, and Beck at the Grammys in 2015.

A major blow to the Grammys’ credibility came in 2014 as Macklemore trumped Kendrick Lamar for Best Rap Album and left every hip-hop head scratching their own. Fans were dumbfounded that good kid, m.A.A.d city – with impeccable storytelling, flow of ideas and nearly unanimous critical acclaim – lost to an album with “Thrift Shop” on it.

Fast-forward to 2020, Tyler took home the award for Best Rap Album at the end of the night, feeling “eh” while still appreciative of how many people his music has reached.

Whether it is entirely misrepresenting an artist’s work, ignoring works of the highest quality or prioritizing possible collusion over honesty in voting, the Recording Academy has made its fair share of blunders. Regardless, Tyler, the Creator took his opportunity to show and tell the world how erroneous they are, demonstrating his graduation from rap to new ventures on their own stage.