I binged 13 shows over break and it was exhausting 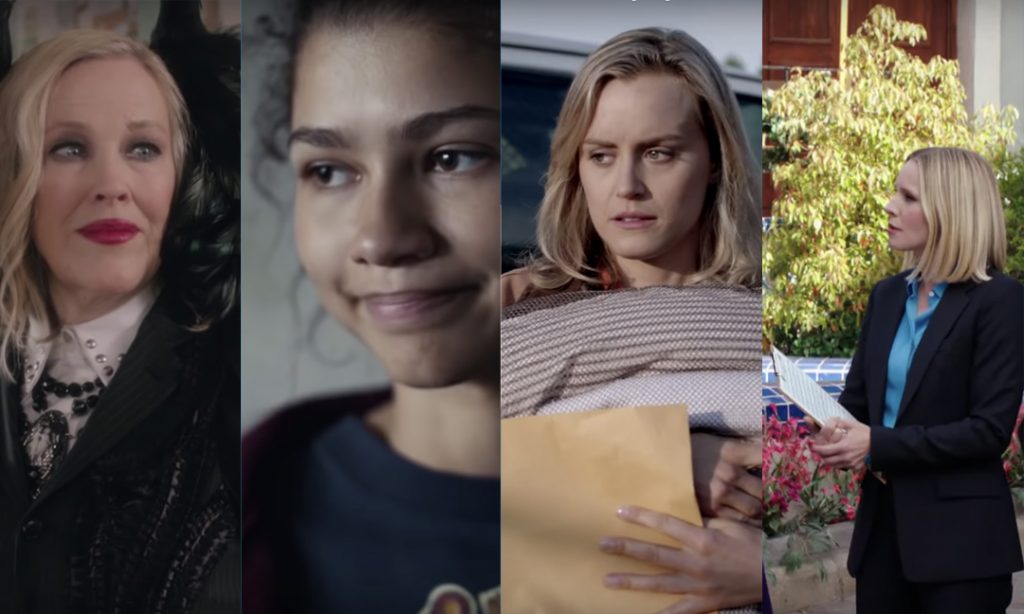 Left to right: ‘Schitt's Creek,’ ‘Euphoria,' ‘Orange Is the New Black’ and ‘The Good Place.' (Photos via YouTube/Graphic by Daisy Grant)

For a film and TV writer, I’m surprisingly uncultured in the latest and greatest of streamable television. When the Emmys come around, I always spend the night saying, “Oh, that looks good,” or “That’s something I would watch.”

I get recommendations from friends and read about what’s getting major hype, but I never follow through, making excuses about not having Hulu (a lie) or not starting shows during the semester so I can focus more on work (another lie). When it comes time to sit down in front of my computer, I usually just throw on Parks and Recreation on Netflix and fall asleep.

This winter break, I decided enough was enough. It was time to join the conversation — I was sick and tired of hearing all my friends talk about their shows and having nothing to contribute. So I made a list: some new, some old, some complete series and some with just one season available.

Yes, it’s a lot, and yes, it’s an interesting mix of genres. But in today’s binge-watching society, this little experiment reminded me of what good television is and what’s just a quick thrill.

[Read more: ‘The Good Place’ deserves to be remembered as one of TV’s most ambitious shows ever]

For example, When They See Us is a true masterpiece. I couldn’t keep my eyes off it. I watched the whole thing — and the Oprah special — in a day (it was about six hours all together), and I didn’t check my phone once. I only got up twice, once to go to the bathroom and once to eat dinner. It was truly captivating, emotional and bold. I cried at the end of every episode; I raged to my friends for days about the injustices these boys encountered.

But two weeks later, as I sat in the same place watching You, I played on my phone and waited to hear a loud noise or someone beg Joe Goldberg to spare their life. Though the second season was more interesting than the first, the only reason I “watched” it was to understand the Penn Badgley memes running rampant on Twitter.

Some shows fell somewhere in the middle. I loved Schitt’s Creek — it’s absolutely hilarious. But I still sat on my phone or got ready while it was playing in the background. As good as it was, it couldn’t hold my attention. The same thing went for Fosse/Verdon, which I thought I’d love — as an ex-dancer, Bob Fosse’s name is ingrained in my brain. My favorite parts were the jazzy interludes, but the normal scenes and dialogue were a little drawn out.

But what’s different about the shows that kept me captivated? They had an intent. Euphoria, for example, wasn’t trying to seduce the audience with addiction, violence and sex. Sam Levinson created a hyperbolic vision of what it’s like to be a teenager battling conflicting morals and emotions. Even with its sometimes artfully unrealistic depictions of high school parties, the themes are relatable and unchanging. This show isn’t looking to push a beaten storyline season after season. It wants to get in and get out, precisely doing its job without any prolonged frills.

After this experiment with myself, I — ironically enough — decided my New Year’s resolution would be to read more. As I watched all these shows, I could literally feel my brain melting away. Even when they were somewhat educational or focused on real-life events, sitting in front of the TV for that long made me antisocial and tired me out more than it should have. I was laying in bed and somehow I felt more exhausted than ever.

Though I am glad I can now “join the conversation” like I wanted to, I also realized that no one is talking about television that much to justify watching all of those shows in one roughly six-week sitting. Maybe if I go on Jeopardy! one day, it’ll all pay off. Right now, however, I need to sit in a classroom and learn something to make up for all the brain power I wasted this winter break.