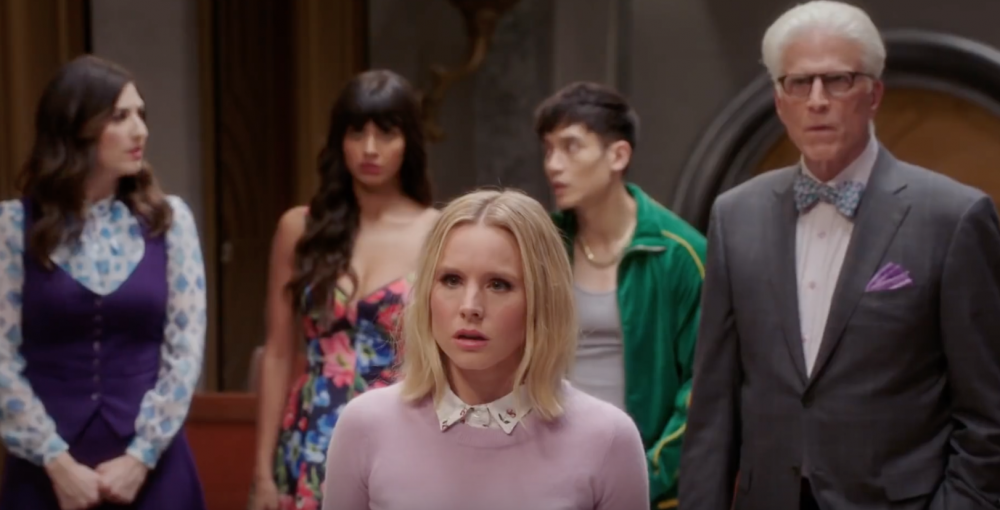 'The Good Place' is on its last season. (Photo via YouTube)

The only guarantee in life is that, one day, it will end. You will die one day, dear reader, as will I, and so will everyone we know and love.

The finality of our shared existence raises more questions than answers. What happens after we die? Will we be rewarded for our good deeds, or punished for our misgivings? Is there an afterlife?

I, personally, do not know how to respond to these questions. Nor will I attempt to. But The Good Place tried to answer them, and now all I can think about is what I’m going to do after the series finale airs on Thursday, when its time on our TV screens is over.

The Good Place originally presented itself as a classic misunderstanding-based sitcom. You know the one: a character is convinced their significant other is cheating on them because they misheard something, all that cookie-cutter noise. In this case, Eleanor Shellstrop (Kristen Bell) thinks she was sent to heaven — “The Good Place” — rather than hell.

So, the show’s stakes were a bit different from its primetime contemporaries. And The Good Place also never resorted to reverting to the status quo, including one of the most well-executed twists in modern TV history in the season one finale.

I won’t spoil it for you if you haven’t watched it yet — although, come on, you had three years — but rest assured, it makes even more sense once you go back and rewatch it. It was a bold move, and one that made every subsequent episode over the following three seasons must-see TV; you couldn’t miss an episode without the fear that the next one would be forking incomprehensible.

From then on, The Good Place wasn’t your average sitcom. It was a philosophy class — without all the self-serving kids trying to sound smart and with some incredible CGI — devoted to making us reexamine our own lives. There was an episode called “The Trolley Problem,” where we got to see different iterations of the trolley problem play out. Immanuel Kant or Aristotle were name-dropped at least once an episode. An entire season’s subplot revolved around there being no ethical consumption under late capitalism.

But the show’s greatest strength was depicting all of these heady subjects without being cloying. We all know an Eleanor (selfish person, ends up miserable), a Chidi (good intentions, no clue how to act on them), a Tahani (selfish intentions, outwardly happy but internally sad) or, perhaps most commonly, a Jason (just a complete goof). And while we have Michael and Janet, two all-knowing beings in the show, to guide us, we are just as in the dark about the nature of the universe until the humans are brought into the loop.

Even the empirical truths of a demon and an all-knowing being, as it turned out, aren’t quite the answers we’re looking for. As we find out in both seasons one and four — albeit for different reasons — heaven isn’t all that it’s cracked up to be.

It may just be the icing on the cake; even in a universe where we know what happens exactly after we die, that might not be enough to placate us for forever. And it comes just as the show is ending its run — on its own terms after just 52 episodes, rather than languishing on for ratings’ sake.

So, what are we to do? If The Good Place has taught us anything, it’s that all we can do is make each others’ existences as great as possible while we’re here. I don’t know how The Good Place will end — although, if I have to guess, it involves the main cast either dying for real, or getting reincarnated. But I do know it made my life a lot better while it was here. And at the end of the day, that’s what we all owe each other.