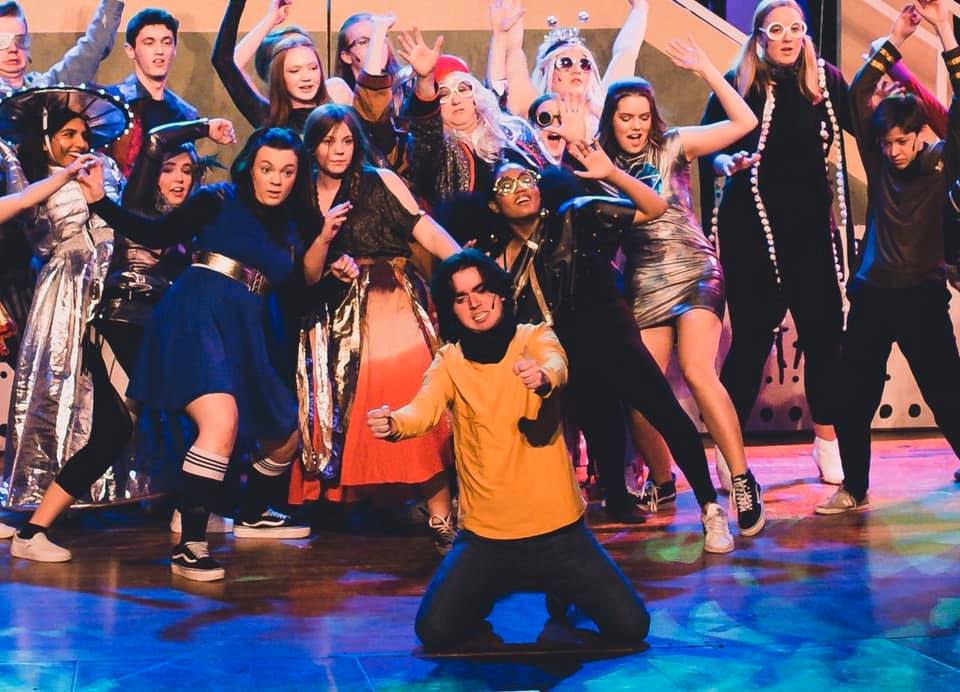 The Fredericktowne Players theater company will put on its final performances of Loserville this weekend. (Photo courtesy of Stephanie Hatmaker)

Even the most feverish musical theater nerds might come up blank when you mention the play, Loserville. Since premiering at the West End in London in 2012, the show had a brief revival in 2015 but never left Britain in its professional run.

Now, the musical has landed stateside, with the first East Coast production premiering for a two-week run in Frederick, Maryland, through the Fredericktowne Players theater company.

Cast in the starring role of Michael Dork is Jake Schwartz, a University of Maryland junior who brings to life the Star Trek-loving geek who fights off jocks and has a reputation as a slacker. Schwartz has previously been involved in this university’s productions such as The Visit at the Clarice Smith Performing Arts Center, but in his first production with the Fredericktowne Players, there’s an added weight to being the first representation of a character most people will see.

“It’s a lot of pressure,” Schwartz said. “I feel like it’s on us as a cast to show what this musical brings to the table. I feel like we’ve really succeeded though.”

A high school love saga set in 1971, the story follows Dork as he navigates life as a nerd at the dawn of the computer age. He fights for respect among his peers and the love of fellow computer wiz, Holly Manson — all set to charmingly anachronistic early 2000s pop-punk music.

The musical was originally based off Welcome to Loserville, the only album released from short-lived British pop-punk band Son of Dork. The mastermind behind the album, lead singer James Bourne, was previously a member of fellow pop-punkers Busted. When Son of Dork folded in 2008, Bourne and musical partner Elliot Davis took the concept and fleshed out the story that would eventually become Loserville.

When Schwartz, a theatre major, nabbed his role in the show, he also took on constant trips to Frederick.

“It sucks, but it’s really worth it,” Schwartz said. “Sure, it’s a good amount of driving, but it’s the East Coast premiere. Not many people can say that they’d done that.”

And one of the more surreal moments for Schwartz came early in the run — he said a man he’d never met before came up to him after the Saturday matinee, saying he was friends with Leonard Nimoy, the original Spock in Star Trek.

With Star Trek being a big element of the show, Schwartz said it was really interesting to hear.

“After talking to him for a bit, he says to me ‘He would’ve really liked you, and you would have made him really proud today,’” Schwartz said. “If that isn’t doing the show justice I don’t know what is.”

Loserville has its final three performances this weekend at Frederick Community College, with Friday and Saturday shows at 8 p.m. and a Sunday matinee at 2 p.m. Tickets are $20.

[Read more: The pop girls are coming, whether you like it or not]