After a shaky start in Ohio State Tri, Maryland gymnastics is working on consistency 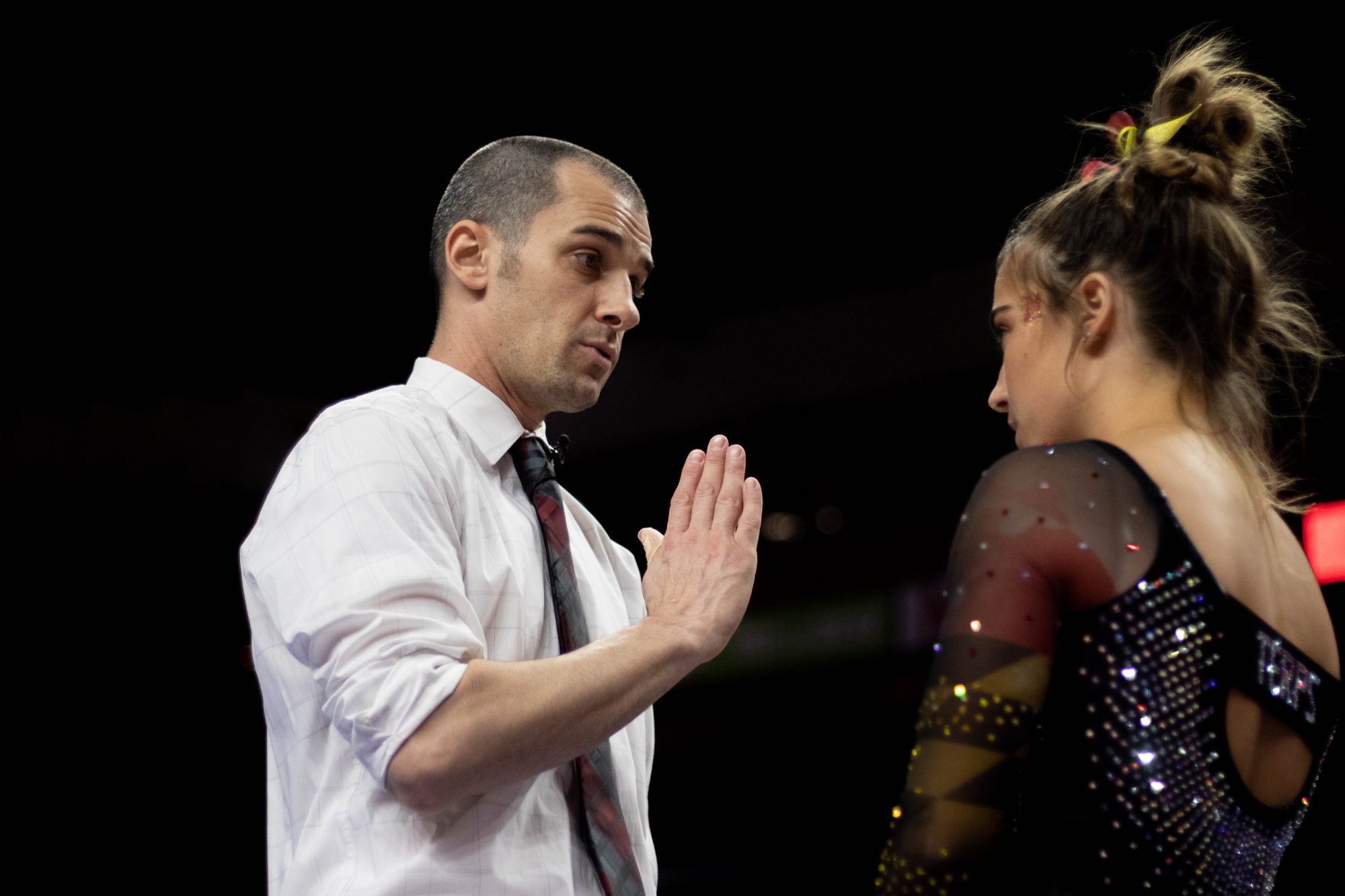 Coach Brett Nelligan instructs one of his gymnasts during the Ohio State Tri on Jan. 25, 2020. (Julia Nikhinson/The Diamondback)

At the end of Maryland gymnastics’ lift session on Tuesday, coach Brett Nelligan high-fived and joked with his gymnasts as they left the weight room.

Despite the Terps’ disappointing season-low showing in the Ohio State Tri — including its first loss this season — Nelligan’s confidence remains. Before that meet, Maryland had earned two straight 196-plus scores, breaking program records along the way.

The 11th-year coach is hardly worried. With a top-25 home matchup against Illinois next on the slate, Nelligan is looking for the Terps to get back to their winning ways with confidence, consistency and a fast start in the first rotation.

“We talked about being loose off the bat this week,” Nelligan said. “We want to have fun, be explosive and not be so tight when we enter the first two rotations.”

Vault has been Maryland’s most inconsistent event throughout the three meets. The Terps began with a meet-high 49.200 on vault at the Little Boston Invitational, but they regressed by posting a 48.725 in their first home meet against Iowa.

On Saturday, Nelligan’s squad bounced back with a 49.250 to finish the meet. Nelligan partly attributes the disparity in scores to the event’s position.

“When we start on vault, we’re a little tight,” Nelligan said. “We’ve tried to control our landings too much. When vault has been last, we’ve scored our highest.”

Inconsistencies also cropped up with landings. After landing every routine through the first two meets, Maryland’s streak came to an end in the second rotation at the Ohio State Tri. Senior Alecia Farina fell on beam, hurting the team’s overall score.

This week in practice, the Terps have put more emphasis on their landings. And ahead of Sunday afternoon’s action at Xfinity Center, they feel prepared to stick their routines across all four events.

“We’ve been focusing a lot on our landings in practice,” Farina said. “Things have been going well because we’ve been sticking the landings.”

Back-to-back scores over 196 raised expectations for Maryland early on. Saturday’s falters were a blip in an otherwise strong start to the campaign, and the Terps recognize it as such.

“As long as we focus on doing one thing at a time, then the consistency will be there,” sophomore Alexsis Rubio said. “We have a lot of potential, so I’m really excited to see how the next few meets go.”

The excitement surrounding the team is palpable. And with four straight Big Ten meets on the horizon, Maryland has the opportunity to clean up any inconsistencies that were present through its first three meets.

Nelligan wants progress to happen one meet at a time, starting against the Illini in the first rotation.

“Illinois on Sunday is the only thing we’re worried about,” Nelligan said. “It really has nothing to do with the opponent, either. If we focus on us, everything else will fall into place.”