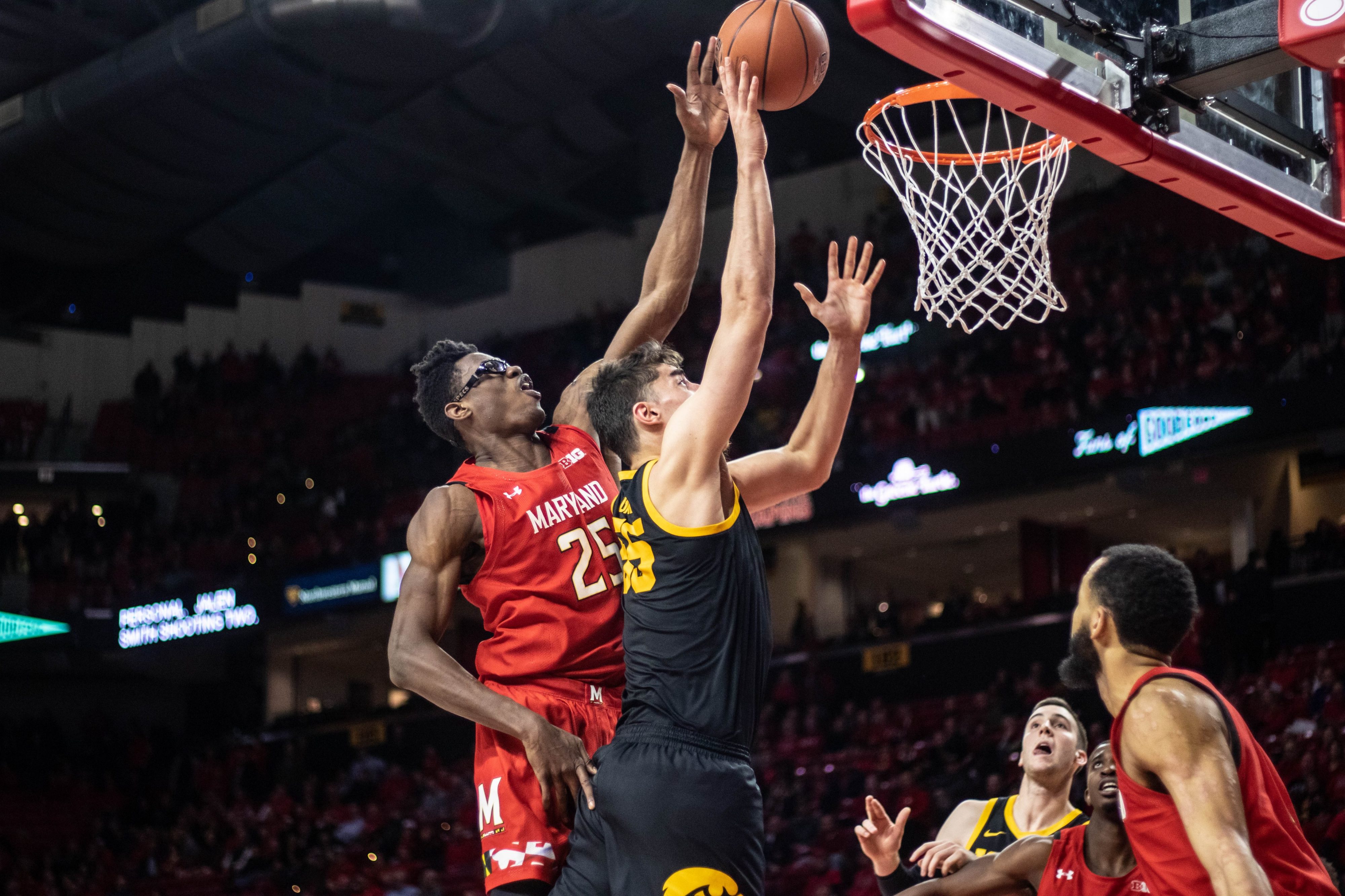 Holding a 10-point lead with 15 seconds to play, No. 15 Maryland men’s basketball had already cemented the win over No. 18 Iowa on Thursday night at the Xfinity Center. But the Hawkeyes continued to run their offense, and found a mismatch when 6-foot-5 guard Eric Ayala found himself defending 6-foot-11 center Luka Garza after a switch.

Forward Jalen Smith had rotated onto a guard, and he was at the three-point arc when Garza received a pass in the low post. As the ball reached Garza’s hands, Smith sprinted toward the hoop.

Garza easily turned on Ayala and hoisted a layup he might have thought was an easy bucket. But despite his team having the result in hand, Smith didn’t relent and blocked Garza’s attempt from behind. It was merely a continuation of Smith’s mentality to make everything difficult for his counterpart during the Terps’ eventual 82-72 win.

“Just trying to stay in between him and the basket, and just trying to fight him on every post-up,” Smith said. “[And] staying out of foul trouble.”

[Read more: In career night, Anthony Cowan played like the MVP the Xfinity Center crowd crowned him as]

For as impressive as Smith has been on the offensive end recently, averaging 21.6 points in his last five games, he’s been just as good on the defensive end. The 6-foot-10 forward has defended a multitude of skilled Big Ten centers, each one bringing a different skill set onto the floor.

Garza was his latest challenge, entering Thursday as the Big Ten’s leading scorer at 23.7 points per game. Garza flashed how complete a player he is with two 3-pointers, low-post hook shots and difficult turn-around jumpers.

“What a great player he is,” coach Mark Turgeon said of the Iowa big man. “He’s almost impossible to guard.”

Foul trouble hampered Garza all night, as the junior picked up two fouls in the first five minutes of the first half and another soon after halftime.

“Wish I could’ve been out there more and not in foul trouble to be a little bit better,” Garza said. “But I think it was still definitely a great matchup.”

In all, Garza finished just shy of his season average, scoring 21 points — eight of which came in the final 1:27 of play. Smith forced difficult looks throughout and never allowed Garza to take over.

Turgeon said Smith “did his work early” on the defensive end, meaning that each Iowa possession that Garza tried to post-up, Smith got himself into a good position to deny a pass or force him into a difficult spot.

The onus to stop Garza wasn’t solely on Smith, though. Guards and forwards also shaded over to double team the dominant big man and give Smith reinforcements in the post.

“Because of his ability to finish around the basket, everybody was a little bit off the help,” guard Aaron Wiggins said. “We had to play smart and just communicate on the defensive end.”

Maryland’s harassing defense on Garza was perhaps only matched by the student section’s jeers and “overrated” chants directed at the Hawkeyes’ center. The derision persisted throughout the game, with Garza only briefly silencing the crowd with one of his turn-around jumpers or interior moves.

Part of the reason Garza couldn’t permanently quiet the students was foul trouble, but another was Smith looming large in the paint — the sophomore swatted away five total shots.

It was just the latest in a string of defensive displays that illustrates how Smith, despite being smaller than other big men in the conference, is equipped with the savvy to limit their effectiveness.

“I don’t think he gets enough credit for how good he is defensively,” Turgeon said. “His footwork and giving up weight and things he’s doing every night is amazing.”