In career night, Anthony Cowan played like the MVP the Xfinity Center crowd crowned him as 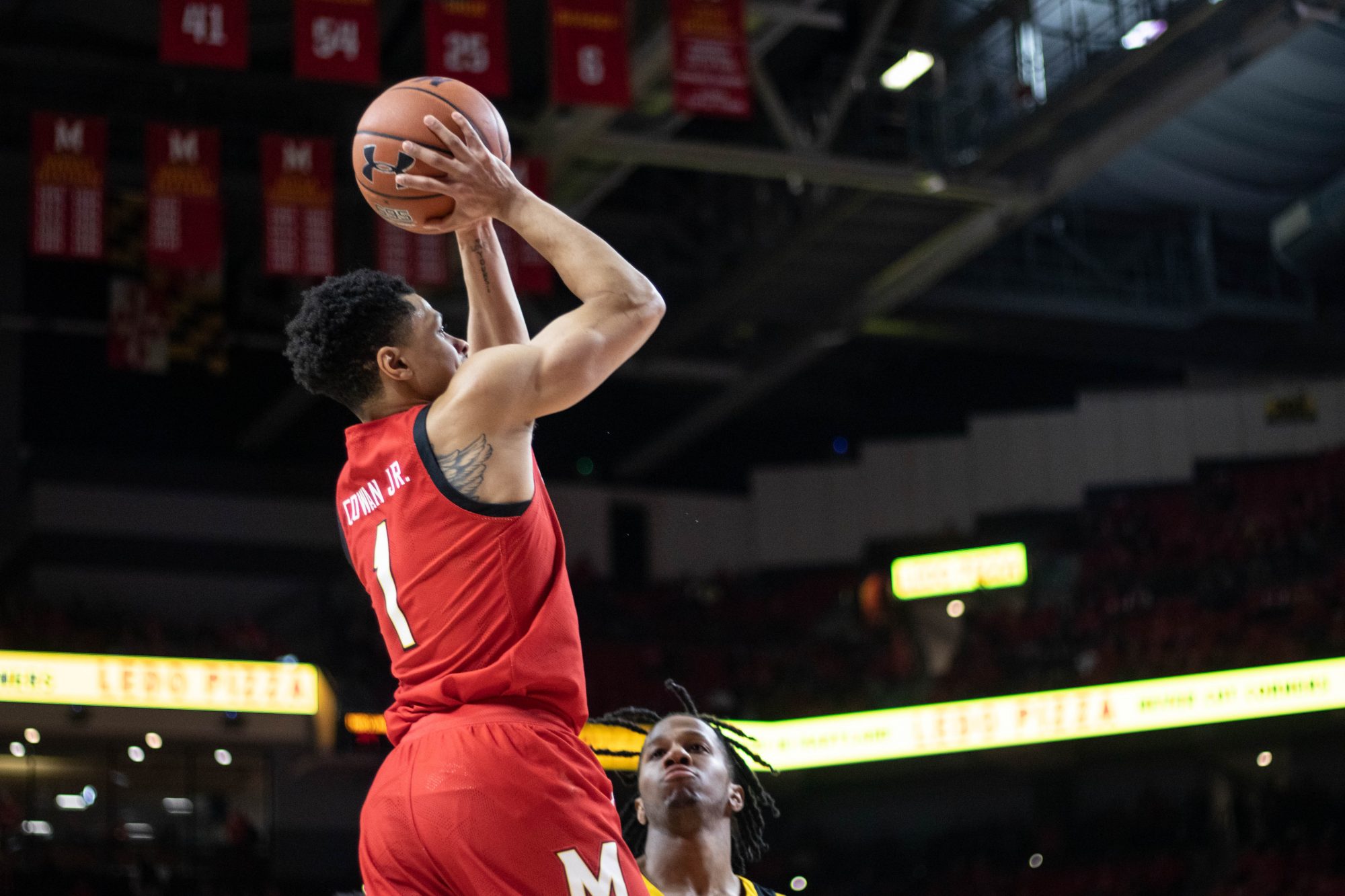 Anthony Cowan wasn’t fazed by the 11-inch difference in height, or the additional foot added on once Luka Garza raised both arms.

Instead, the 6-foot Maryland men’s basketball guard went right to the rim, driving baseline before meeting the Iowa center in mid-air. He fell away — the better to get the ball out of Garza’s shadow — and flicked his acrobatic attempt to the rim. It fell home.

For four seasons, that’s been Cowan. For four seasons, he’s been about as big for the No. 15 Terps as anyone — even if he’s smaller than some of the players he’s found ways to outperform. And on Thursday night, it was Cowan who rose highest once more, over Garza and the No. 18 Hawkeyes, surpassing Walt Williams to move into 12th all-time at Maryland in scoring.

It’s one thing for the Xfinity Center faithful to see Cowan at his best — chanting “MVP” as time wound down on the 82-72 victory — and another entirely for an opposing team. For those who must line up against Cowan on a night like this, the magnitude of the task in front of them becomes clear. When Cowan’s going strong, there’s really no stopping him, not even the outstretched arms of Garza.

“What’s tough for us is he’s a good shooter, but at the same time he’s so quick he’s going to rip and drive you,” Iowa guard Joe Wieskamp said. “So when you’re closing out up into his space, you’ve gotta be aware of him driving. His first step’s so quick, and then once he gets past you, he either has a layup for himself or he’s creating for others.”

It’s not a place a defender wants to find himself.

Cowan posted a career-high 31 points, surpassing his 30 against Temple at the Orlando Invitational. He drew plaudits from the 16,369 packed in to watch this top-25 Big Ten matchup for his knifing runs into the lane, the agile finishes at the rim.

But for all the flashy moments — and there were plenty — Cowan impressed in different ways, too.

He had the option to chuck up a corner three late in the first half, yet pump-faked, dribbled past his defender and snuck a bounce pass inside for guard Darryl Morsell to finish off. He supplied five other assists, bringing his average assist tally in the last four games to 5.75.

And for a player who’s undersized on the boards, he pulled in six of those, including a box-out on 6-foot-9 forward Cordell Pemsl. Those were all the underlying factors in what was a standout night on the offensive end, shooting 9-for-15 while converting 90.9 percent of his free throws.

“He’s really quick in the open court, so you’ve gotta get back in transition, and a couple times we just let him go right to the rim,” Hawkeyes guard CJ Fredrick said. “He got some easy ones going, easy ones at the rim, and then he started feeling himself a little bit and was knocking down threes. He’s just really good with the ball.”

Cowan’s been especially good with the ball as of late. He knocked down only two shots against Northwestern, but he had a 6-to-1 assist-to-turnover ratio in 37 minutes. And during Maryland’s second road win this year, a comeback over Indiana that included an assist from Cowan on Jalen Smith’s game-winning score, the senior went without a turnover.

While the guard had two giveaways Thursday night, they were inconsequential in the grand scheme of things, hitting three 3-pointers and slicing through the lane when he desired.

“He’s virtually impossible to keep in front of you,” Iowa coach Fran McCaffery said. “You have a shot if he’s missing jumpers. If he’s making jumpers, it’s really difficult. But the thing about him, he finds people. He’ll pitch it to the rim, he’ll skip it to the corner. He’s creative that way. He plays like a veteran guy who’s been through it.”

That’s because he has been through it.

As the senior dribbled down the shot clock with about a minute remaining in Thursday’s game, a chant that had popped up in corners of the arena throughout the second half finally caught life. “MVP,” the crowd shouted down to the Bowie native.

It seemed to be the only time Cowan took a self-indulgent shot all night, pulling up from long range despite tight coverage.

He sank it, though. He pounded his chest as he skipped back down the floor. And with each thump, the crowd rocked with him, the 6-foot guard who played bigger than anyone.