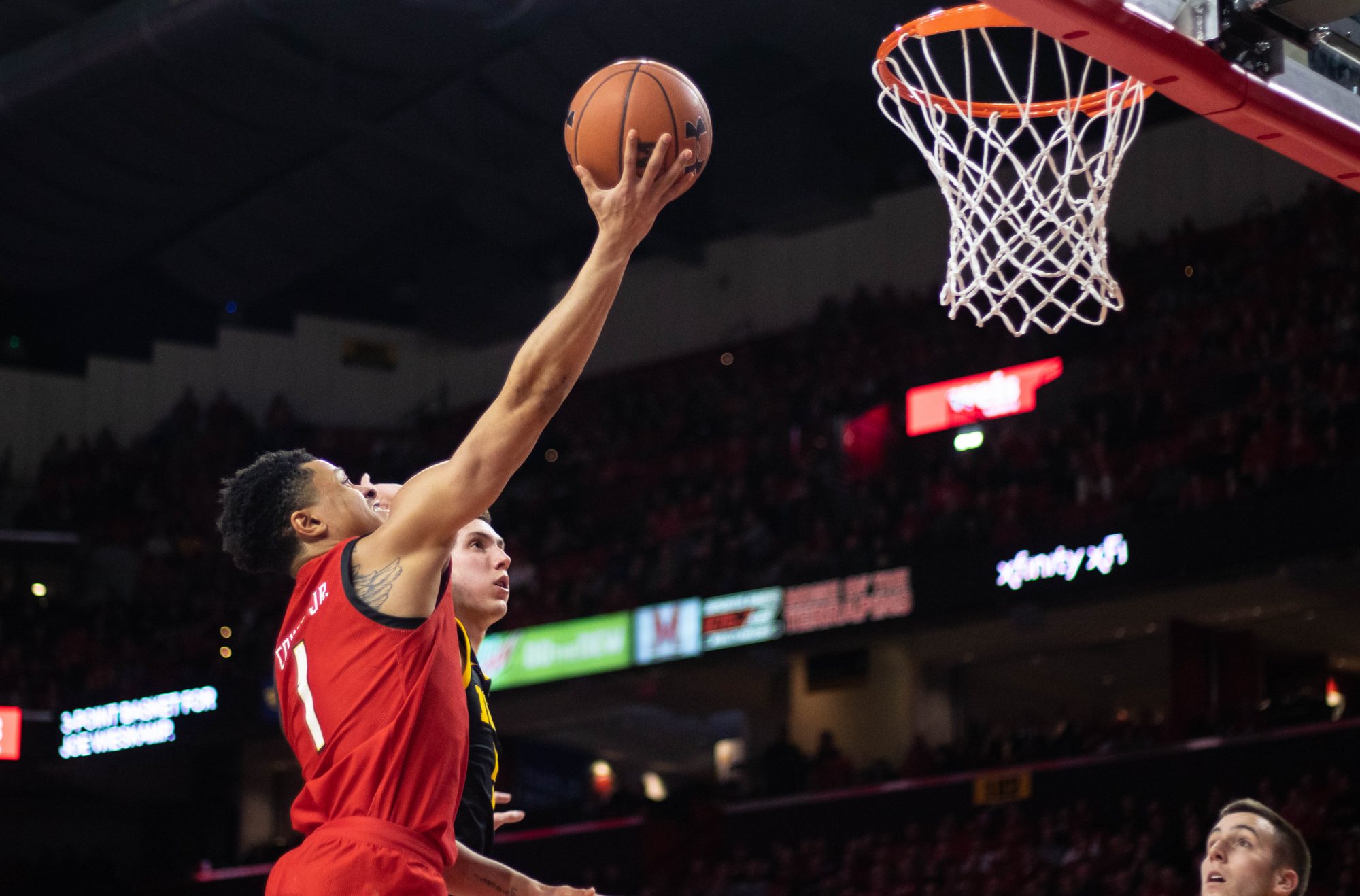 Guard Anthony Cowan goes up for a layup during Maryland men's basketball's 82-72 win over Iowa on Jan. 30, 2020 at Xfinity Center. (Julia Nikhinson/The Diamondback)

Well before tipoff of No. 15 Maryland men’s basketball’s matchup with No. 18 Iowa, a young Hawkeyes fan entered the student section and held up a sign that read “Luka Garza No. 1 pick.”

Garza noticed, and approached the fan for a picture, while the surrounding Xfinity Center student section began to chant “overrated.” Much of the students’ disdain Thursday night was focused on Garza in what was supposed to be a battle between him and Terps forward Jalen Smith.

But it wasn’t Garza, the Big Ten’s leading scorer, who stole the show. And it wasn’t Smith, the reigning conference Player of the Week. Instead, in the battle of two of the Big Ten’s best interior forces, it was 6-foot guard Anthony Cowan and his career-high 31 points that overshadowed those imposing post players to lead Maryland to an 82-72 win Thursday.

“He was feeling it. We all saw it,” coach Mark Turgeon said. “We just kind of got out of his way and let him do his deal tonight.”

Smith still made a major imprint on the game, scoring 18 points, grabbing 14 rebounds and sending away five shots. But it was Cowan who seemingly always had a hand in Maryland’s biggest makes.

Whether it was a tough finish in the lane, one of his two first-half threes or one of his six assists, the senior guard rose to the forefront when his team needed it most.

“When he takes over like that, it almost opens up for other guys because the opposing team has to worry so much about him,” guard Aaron Wiggins said. “It’s just fun to watch.”

Maryland’s leading scorer was fun to watch, while Iowa’s top scorer faced foul trouble, curtailing his opportunity to put on a show.

Garza picked up two fouls within the first five minutes, forcing Iowa’s premier big man to the sideline because of a moving screen and an over-the-back foul. The Big Ten’s leading scorer remained saddled to the bench for nearly nine minutes.

“We’re a different team with Luka,” coach Fran McCaffery said. “The more he’s out there, the better we are. That kind of changes everything.”

To make up for Garza’s lost production, the Hawkeyes (15-6, 6-4 Big Ten) leaned on their third- and fourth-leading scorers, CJ Frederick and Joe Wieskamp. The duo combined for 14 points in the first half, 12 of which came from behind the arc.

Maryland’s own tandem of Cowan and Smith paced the Terps (17-4, 7-3 Big Ten) in the first half, finishing with 20 points before tacking on a combined 29 points in the second half.

“When you play them, you want to mark Cowan and Smith,” McCaffery said. “They had 49, so we didn’t do a good enough job on those two guys.”

Smith electrified the crowd with a sequence that included two resounding blocks and a pair of buckets in the paint.

Guard Darryl Morsell followed Smith with a jumper that gave the Terps a 24-23 lead. But as was often the case in a competitive first half, which included six lead changes and three ties, Iowa answered back.

After being relegated to the bench, Garza returned and hit two difficult shots to give Iowa a lead before he turned to the student section — which had directed boos and overrated chants at the Washington, D.C., native.

Early in the second half, the officials called a double foul on Garza and Smith — the Iowa center’s third of the night. After the 6-foot-11 Garza went to the bench, Maryland capitalized with a pair of buckets on the interior during a 6-0 run that gave the Terps their largest lead of the game at 48-39.

The Hawkeyes made a brief push back, but Cowan assisted on back-to-back threes to guards Eric Ayala and Aaron Wiggins that give Maryland a 60-49 lead with 7:23 to play.

“It’s probably his best game,” Turgeon said of his senior guard. “The game’s so much easier for him because he’s figured out how to play it. … He just flipped. He’s just become this terrific, understanding basketball player.”

For good measure, Cowan nailed a three with a minute to play to punctuate the Terps’ win. That shot came just after Cowan waved his arms, encouraging the Xfinity Center crowd to raise its decibel level.

Cowan raised his level all night, bouncing back from a nine-point outing earlier this month against Iowa and helping his team avenge the 18-point loss to claim sole possession of third place in the conference standings.

“It doesn’t surprise me,” Wiggins said. “That’s big-time. Thirty-one points, six boards, I mean, what else could you ask out of a point guard?”