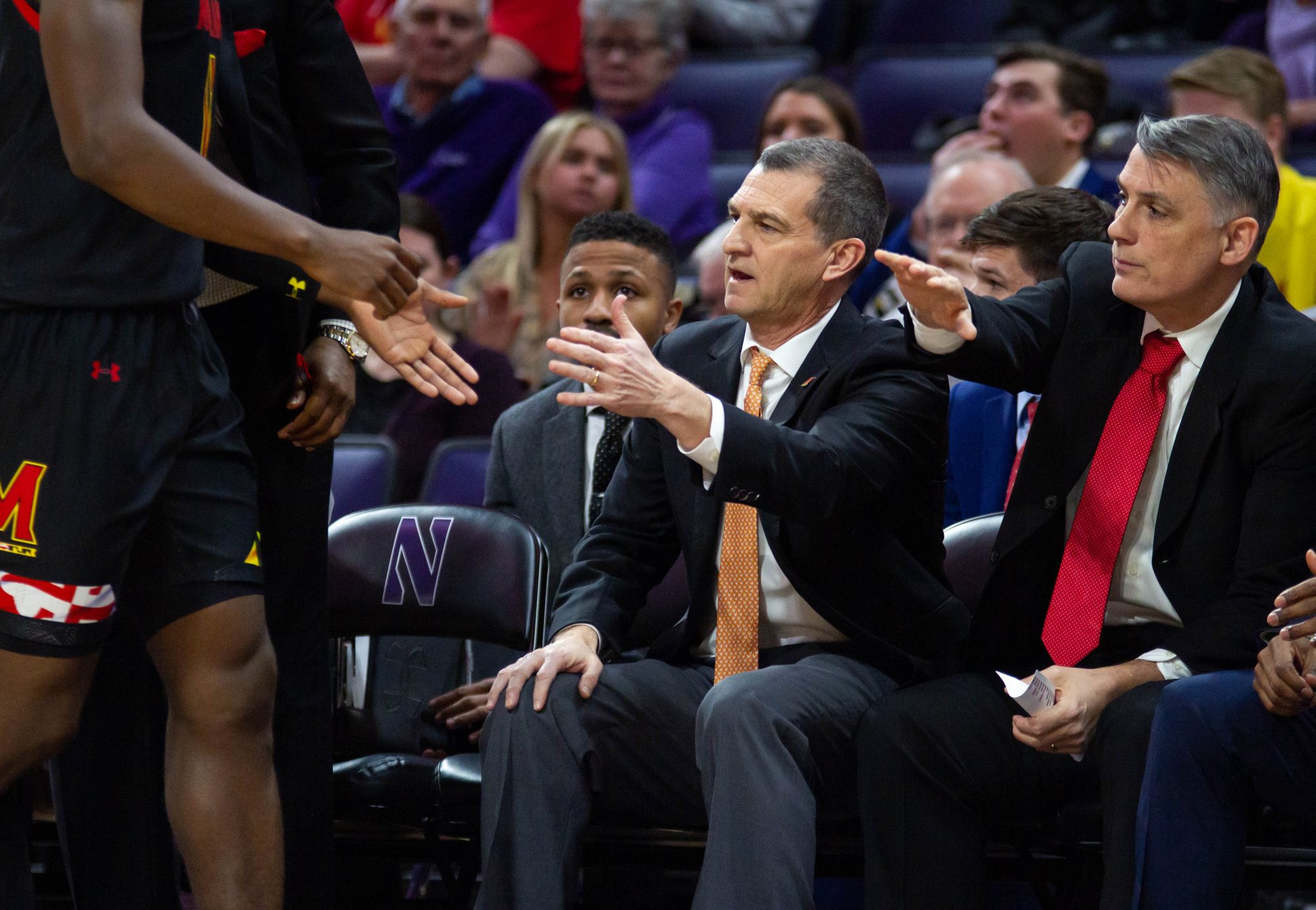 Mark Turgeon high-fives one of his players during Maryland men's basketball's 77-66 win over Northwestern on Jan. 21, 2020. (Julia Nikhinson/The Diamondback)

Down 14 points to a middling Northwestern team at Welsh-Ryan Arena, Maryland men’s basketball coach Mark Turgeon was frustrated and looking for answers. Before entering the locker room, his assistant coaches implored him to deliver a fiery halftime speech.

It was similar to speeches Turgeon had given before, but this time, he mentioned the possibility of turning the season around — and the players’ faces lit up upon hearing that. It was from that reaction Turgeon knew his team had the requisite fortitude to stage a comeback and earn its first road win of the season.

The Terps responded out of the locker room, piling on 51 points to leave Evanston, Illinois, with its first road victory.

Five days later, in a back-and-forth battle with Indiana at Assembly Hall, Maryland found itself trailing by seven points with 2:37 to play. Turgeon once again summoned a speech to inspire his team to battle back, and this time it eventually led to a 7-0 run in the final 68 seconds to come away with a 77-76 win.

“It couldn’t have gone any better for us the last 2:37,” Turgeon said. “We just kept talking about, ‘Keep fighting, keep fighting. We’re right here, we’re right here. Put pressure on them.’”

Faced with adversity in both games — and on the road, where wins have been scarce for Big Ten teams — the ninth-year coach guided his team to a pair of crucial road victories as the Terps look to keep pace in the competitive Big Ten conference.

Against Northwestern, the halftime speech came from a place of bewilderment. The first half against the Wildcats mirrored a lackluster second half from the team’s previous game against Purdue, where the Terps narrowly escaped with a home win after a 16-point halftime lead.

Spotty shooting and an uncharacteristically porous defensive showing pitted Maryland on the other side of a sizable halftime discrepancy.

“As soon as [Turgeon] walked in, he said ‘You gotta believe it, you gotta want it. And this is the start of a new season. We can start right now at halftime,’” guard Aaron Wiggins said following the win over Northwestern. “That was one thing everyone took personal.”

A heightened effort level was apparent. With less than a minute to play and the Terps leading by 11 points, forward Jalen Smith dove on the floor to secure a loose ball — a representation of how attentive the players were to Turgeon’s message.

Turgeon’s sentiment of turning the season around seemed to carry over to Maryland’s game against the Hoosiers. From the sideline, he watched as his team played one of its best first halves of the season — building a lead as high as 14 points before intermission.

[Read more: Maryland basketball up to No. 15 in AP poll, Jalen Smith named Big Ten Player of the Week]

But the home team stormed back out of halftime, starting the final 20 minutes on an 11-1 run to claim its first lead of the game. After the lead changed hands only briefly with a Smith 3-pointer, Indiana retook the advantage at the 14:38 mark.

The Hoosiers not only established the lead, they extended it to as many as eight points. Maryland never panicked, though; the team has been in this spot plenty of times before, most recently against Northwestern.

“We’ve got something special,” guard Eric Ayala said before the Terps took on Indiana. “For us to be able to come together and go out and come back in those games and compete, it shows how well-together we are.”

Turgeon’s team kept its deficit manageable, never allowing it to grow to double-digits. And with 2:37 to play, and his team gathered around him, Turgeon once again delivered a message that resonated with his players.

With just over a minute left, it was all working for the Terps. The team came away with three consecutive scores on the offensive end and strung together three straight stops on defense.

Turgeon didn’t deflect the pass that led to a pivotal steal with 1:02 to play. He didn’t hit a step-back 3-pointer to bring the Terps within one. And he didn’t make the game-winning shot before proclaiming Assembly Hall was his house, as Smith did. Turgeon did, however, empower his players, and he’s done so the last two games to help navigate his squad out of unfavorable situations.

“I’m watching him grow. As much as we’re growing, I’m watching Coach grow as a coach,” Ayala said before the team traveled to Indiana. “The way he instills confidence in us … He’s constantly encouraging us to be better.”