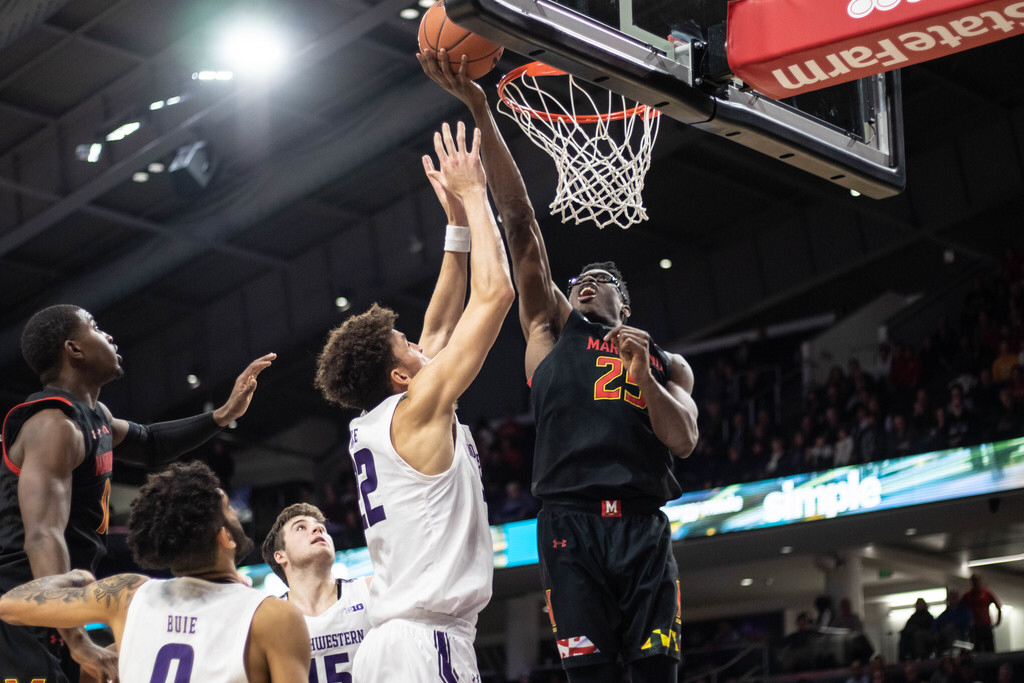 There was only ever going to be one player No. 17 Maryland men’s basketball would turn to with Sunday’s game on the line, a one-point deficit with under 30 seconds to play. With the way Jalen Smith had played all day — splashing from deep, dominating inside — the ball would surely find its way to the sophomore.

And it did. Guard Anthony Cowan waited for Smith to break into the paint on a pick-and-roll, rifled the ball to the 6-foot-10 forward and watched the last highlight unfold from a highlight-reel game.

Smith finished down low through contact, securing the Terps’ 77-76 win at Assembly Hall on Sunday. After the last Hoosiers scramble for a winner of their own was swept aside, Smith’s teammates rushed toward him. The NBA prospect — whose career-best 29-point, 11-rebound performance seemed to signal how ready he is for that level — then pointed down to the floor, as if to say he owned it.

Since Maryland joined the Big Ten, no Terp had ever gone into Assembly Hall and willed his team to victory. Smith did that Sunday, in a game he and his teammates seemed destined to run away with but spoiled with poor second-half shooting until the final 7-0 spurt — capped with Smith’s inside bucket — staved off another road disappointment.

[Read more: With a three vs. Northwestern, Ricky Lindo’s confidence is showing for Maryland basketball]

Early on, as Maryland (16-4, 6-3 Big Ten) began to build a 14-point advantage, everything seemed to fall for coach Mark Turgeon’s team.

Smith’s second three-point attempt Sunday hit off the far iron and bounced high into the air, level with the top of the backboard, before soaring down and sailing through the hoop with a swoosh.

There was some sort of magnetism between ball and rim throughout the first half for the Terps. Even that attempt, one that looked just off and ricocheted into the air, couldn’t help but swish through the net on the way back down.

With that effort, there seemed to be a certain amount of luck involved for the Terps’ sophomore forward. But then Smith corralled a miss and dunked. And then he hit his third triple. And then he finished through traffic at the rim.

And before long, with Smith playing at his best, Maryland secured its second win over Indiana (15-5, 5-4) this season. The lights-out first half shooting gave way to an early second-half collapse. But that collapse gave way once more to a torrid finish, with four points from Smith and a critical 3-pointer from Aaron Wiggins, to leapfrog the Hoosiers in the conference standings.

Before Sunday’s contest, Big Ten road teams had won 12 of the 58 conference matchups. In a league with 12 of its teams in Ken Pomeroy’s top-40 rankings, it’s those road environments that may well be the difference maker.

It’s never easy, though. The Terps picked up their first road victory Tuesday against Northwestern, recovering from a dismal first half to dispense the Big Ten’s worst team. And on Sunday, despite hitting a season-best nine 3-pointers and shooting 54.8 percent overall in the first half, they ran into an opponent who hung around with its own hot hand.

The Hoosiers trailed by nine at intermission while shooting 52 percent. So even after 13 first-half points from Smith and another 10 from guard Anthony Cowan, a lay-in from center Joey Brunk handed Indiana its first lead of the game less than four minutes into the second period.

Indiana’s advantage hovered around eight for much of the half, until Cowan — who finished with 18 points — drained a triple with 2:22 remaining. And while Devonte Green answered with a layup about a minute later, the six-point deficit was just close enough for Maryland to recover from.

After Smith’s game-winning lay-in, the Hoosiers had a chance. And forward Trayce Jackson-Davis, backing down Smith in the paint, had a reasonable short-range look.

His attempt missed, though, and Smith tipped it out of the paint to seal the deal and send his teammates into a frenzy, mobbing him near center court. Then, he pointed down to the floor. He owned that court, he seemed to say. And with 29 points and the game-winning lay-in, it’s hard to argue otherwise.