With a three vs. Northwestern, Ricky Lindo’s confidence is showing for Maryland basketball 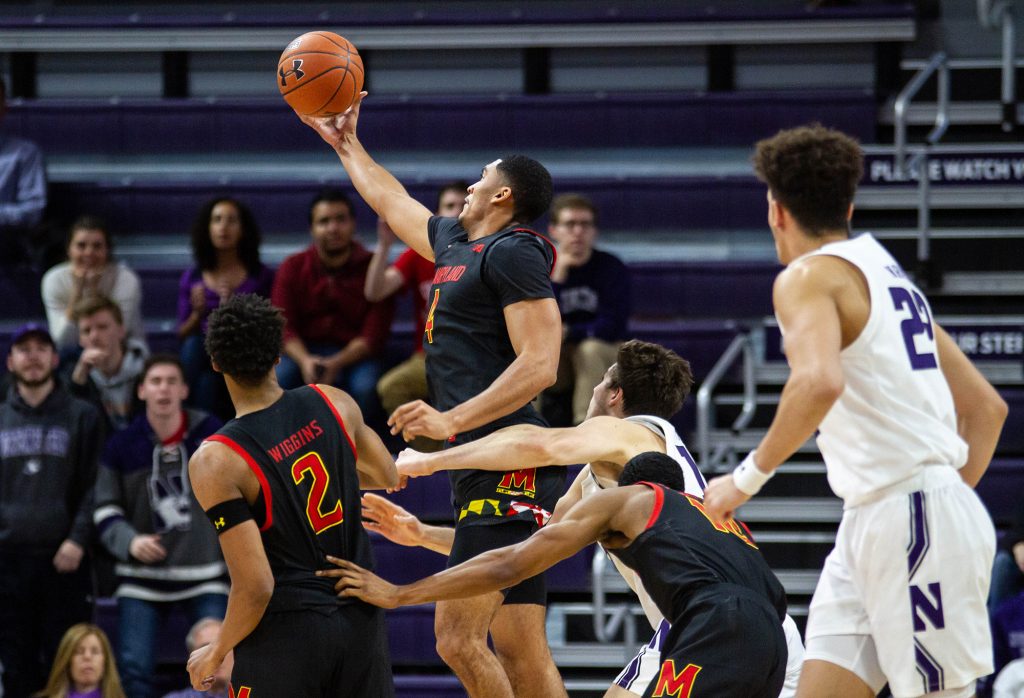 Forward Ricky Lindo goes up for a layup during Maryland men's basketball's 77-66 win over Northwestern on Jan. 21, 2020. (Julia Nikhinson/The Diamondback)

Maryland men’s basketball’s starters hadn’t figured it out yet against Northwestern, but its bench sure had.

After hearing clank after clank ring off the iron — to the tune of 0-for-5 shooting over the first three minutes Tuesday — coach Mark Turgeon rotated his lineup. That’s when guard Serrel Smith splashed twice from deep, bringing the Terps back into the game. And that’s when forward Ricky Lindo caught the ball in the corner and didn’t think twice, rising up and flicking his wrist to hit from long range.

Lindo hadn’t so much as attempted a 3-pointer in a game for over two months. But when Maryland needed a spark plug to revitalize a stagnant offense during the opening few minutes, the 6-foot-8 sophomore provided it.

The Terps have scorers, and plenty of them. They have an inside menace in Jalen Smith and myriad guards and wings who can change games. Lindo, though, offers Turgeon’s squad something different, and as his confidence improves — and with it, his shot — he could be the change-of-pace option off the bench who can boost his team with timely contributions, just as his triple did against the Wildcats.

“I think it was really important, just to show how easy it was for us to score,” Lindo said, “and then give confidence to the starters. You know, [it] helped a lot, especially in the second half.”

Nearing the midway point of the first half, Serrel Smith and Lindo led Maryland in scoring. Later, after taking a 14-point deficit into the locker room at halftime, Aaron Wiggins, Jalen Smith and Anthony Cowan would take over as the dominant scorers they tend to be.

The early bench contributions, however, helped keep the Terps afloat in a game in which they shot 24 percent in the opening 20 minutes, compared to the Wildcats’ 60 percent clip from the field.

Lindo’s three was a product of summer work with assistant coach Matt Brady and additional time spent alone after practice. Turgeon said the forward makes at least 50 treys from the corner following each training session, preparing for moments like Tuesday’s.

“Ricky’s was three weeks in the making,” Turgeon said. “He’s just got to be ready to knock it down. He’s made more in practice, finally carried over to a game.”

As a freshman, Lindo featured sparingly down the stretch. And while he worked to develop more of an outside presence, he converted only two of his 12 attempts from long distance — and none over the last two months of the campaign.

Lindo hasn’t seen a minute increase this year, either, and his only two other three-point attempts came in the first two games of the season in nonconference play. He made one and missed the other. His effort against Northwestern, though, showed he’s willing to take those chances. And it paid off, helping to narrow a hefty deficit at Welsh-Ryan Arena.

As Lindo strolled toward the scrum of television cameras after Friday’s practice, he realized he still held a basketball in his hands. From along the baseline, Lindo hoisted a one-handed shot, flicking his wrist as he had early in the first half of Maryland’s eventual 77-66 win on Tuesday.

The result was the same, too. The ball swished through the hoop.

“Got that on camera?” Lindo asked when he turned toward the assembled reporters.

They hadn’t. But the confidence Lindo feels in himself, they had captured that. And with that confidence, there’s every possibility those cameras will capture his next swish — only then, it might come in a game.