No. 17 Maryland men’s basketball comes back from hefty deficit to beat Northwestern, 77-66 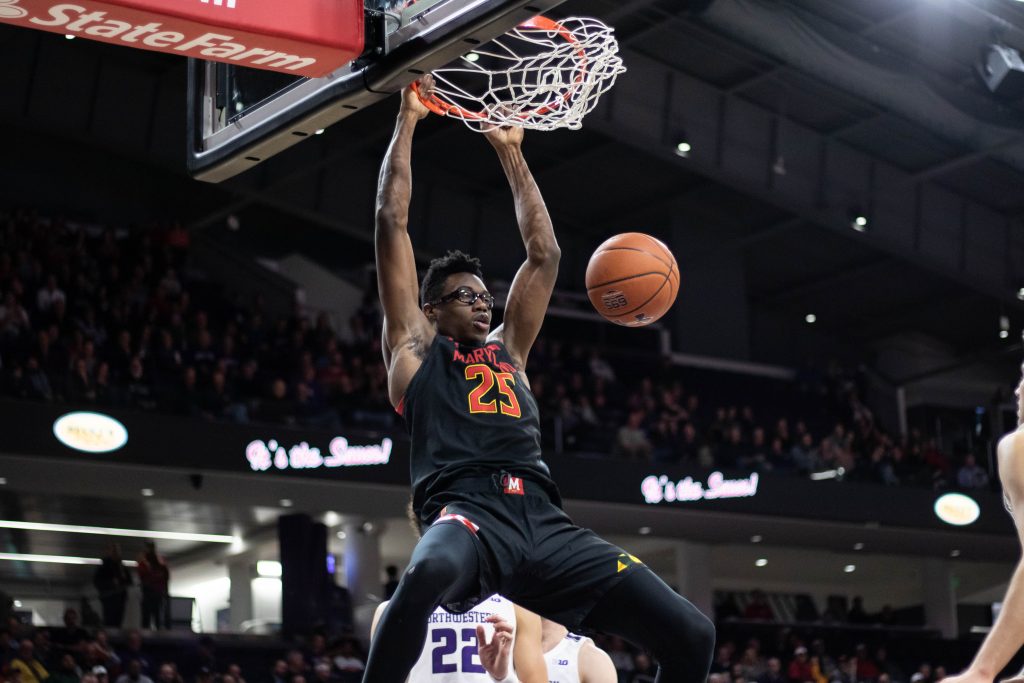 Forward Jalen Smith hangs on the rim after a dunk during Maryland men's basketball's 77-66 win over Northwestern at Welsh-Ryan Arena in Evanston, Illinois, on Jan. 21, 2020. (Julia Nikhinson/The Diamondback)

EVANSTON, Ill. — As Maryland men’s basketball forward Jalen Smith received a pass for an open three and elevated for the shot, his team’s bench rose in anticipation. With the ball still mid-flight, guard Eric Ayala already began sprinting back on the defensive end, sure that Smith’s attempt would fall through.

But Smith stayed to watch as his shot swished through the net, then turned to stare down some heckling courtside Northwestern fans at Welsh-Ryan Arena.

The 3-pointer was the dagger that sealed the No. 17 Terps’ 77-66 comeback victory over the Wildcats on Tuesday. Smith’s second-half outing accounted for 21 of his team’s 51 points after halftime to lead Maryland to its first true road win of the season.

“I know what I’m capable of, and my team knows what I’m capable of,” Smith said. “Shots were just falling for me in the second half, and I just — I don’t want to say takeover — but I was pretty much just helping my team get to the point where we needed to get.”

[Read more: For Maryland basketball, having Jalen Smith protecting the rim is a “luxury”]

Maryland (15-4, 5-3 Big Ten) came into the game aware of Northwestern’s ability to take away the interior game with quick double teams on post players and a defense that sags back to prevent open driving lanes.

As a result, the Terps spread the floor and fired an onslaught of shots from beyond the three-point arc.

Of Maryland’s first 12 shot attempts in the opening 10 minutes of action, 11 of them were from three-point range. Reserves Serrel Smith and Ricky Lindo combined to convert three of those 11 attempts to get the Terps’ offense going after falling behind 10-0.

While the Terps’ starters mustered just two free throws and shot 0-for-7 from the field in the first 10 minutes, coach Mark Turgeon’s bench provided a much-needed spark by scoring 13 of the team’s first 15 points to keep Maryland in the game early.

“Our bench presence was really good today,” Wiggins said. “Those guys who started, eventually everybody found their way and they just started to play more comfortable, more confident and with more passion, and that was huge for us.”

But Turgeon’s team still suffered from anemic interior productivity. Jalen Smith hit Maryland’s first two-point field goal — on its second attempt from inside the arc — over 10 minutes into the game, finishing an alley-oop lob from Cowan.

The sophomore’s dunk cut the Terps’ deficit to two possessions, at 23-17, but Northwestern (6-12, 1-7 Big Ten) answered back. Playing against Maryland’s 3-2 zone, the Wildcats patiently worked the ball around for easy buckets inside.

[Read more: Aaron Wiggins is back in form for Maryland basketball since coming off the bench]

Five layups against the scheme helped Northwestern finish the half on an extended 17-9 run to take a 40-26 lead into the locker room.

Despite the matchup against the Terps’ 20th-ranked scoring defense, the Wildcats and their 292nd-ranked scoring offense matched the highest first-half total Turgeon’s team had allowed all season.

“Our defense has always been good,” Turgeon said. “It wasn’t good [in the first half].”

Facing a 14-point deficit, and a second-consecutive futile offensive half — dating back to Purdue — Turgeon’s assistant coaches encouraged him to give an impassioned halftime speech.

“He said he just us wants to play ‘streetball,’” Jalen Smith said. “And that just fired everybody up. Because everyone knows that streetball, you’re just playing — not really worried about anything.”

Led by Smith, who finished with a career-high 25 points, Maryland took the message to heart. During a 10-3 run to start the half, the Baltimore native had a wide-open dunk and an emphatic put-back slam through contact that became a three-point play.

Maryland’s revitalized interior presence also paid dividends at the free throw line. Northwestern’s seventh team foul with 12:36 to play sent the Terps into the bonus, affording the visitors easy chances to cut into the deficit.

“Once our guys got a little bit more body movement, we were really hard to guard,” Turgeon said. “The guys just played, man, they just played. … They just made great decisions, and they were all about winning.”

Four free throws and a three from forward Donta Scott brought Maryland within a possession at 53-50 — the closest the game had been since Northwestern led 5-0 early on. Then, Wiggins and Cowan pushed the Terps ahead with back-to-back threes.

Turgeon’s team finished off Northwestern and capped off the comeback with timely shots and efficient free-throw shooting, finishing 26-for-29 from the charity stripe.

The second-half offensive explosion, tied for the highest-scoring 20 minutes of the season with 51 points, was a stark contrast from Maryland’s 21-point showing after halftime in its last game against Purdue.

Smith led the charge and let some heckling Northwestern fans know about it with 46 seconds to play — pointing to the scoreboard and placing his pointer finger over his lips to silence them. It was fitting — after all, his second-half outburst did silence Welsh-Ryan Arena on Tuesday, aside from the large contingent of Maryland fans.

“Once I started hitting shots, it just gave me an energy boost,” Smith said. “I was just getting into it with the crowd — just a little friendly warfare, but it was just a fun night.”