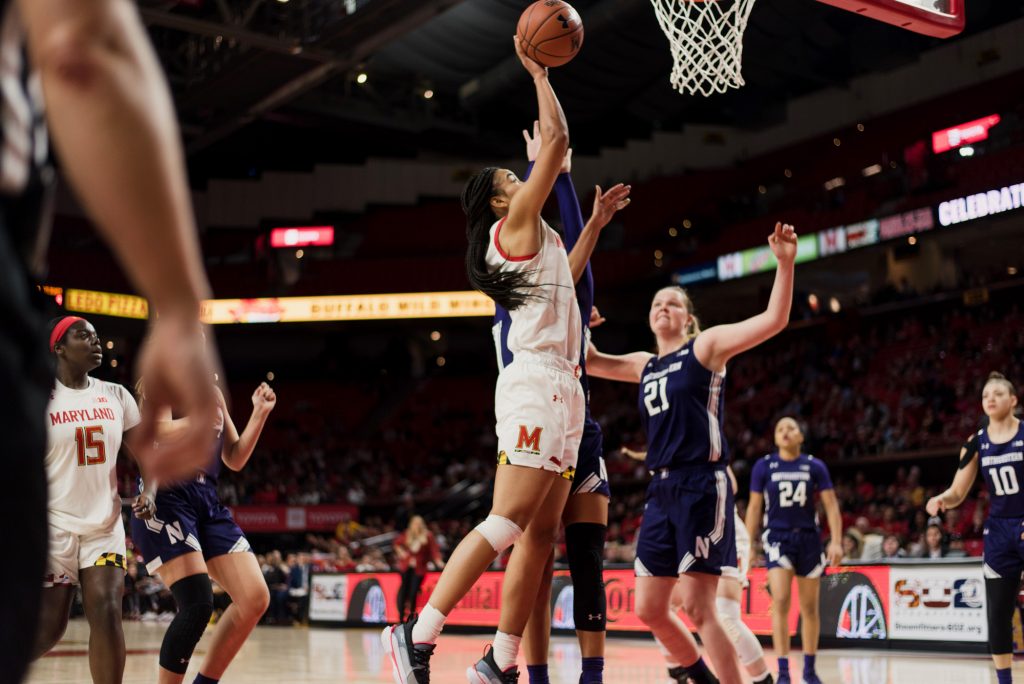 Forward Stephanie Jones goes up for a layup during Maryland women's basketball's 70-61 win over Northwestern on Jan. 26, 2020. (Gabby Baniqued/The Diamondback)

As Shakira Austin’s attempts to put weight on her left leg were consistently met with wincing and visible frustration, it became clear Maryland women’s basketball would need to navigate the remaining three quarters of its matchup Sunday with Northwestern without its defensive anchor and tallest player.

With the 6-foot-5 forward sidelined, the already injury-depleted Terps were down to just eight remaining healthy players. And forward Stephanie Jones was the only option capable of playing down low.

Maryland initially struggled to adapt to Austin’s absence, seeing their six-point lead evaporate quickly into the second quarter and prompting coach Brenda Frese to call a timeout. Frese banded her team together out of the break to ignite a payback victory over the Wildcats, in which several players elevated their games at critical junctures.

“We scripted it like that,” Frese said with a grin. “I love that kind of offense because I think you’re really hard to guard … we’re starting to learn that as a team, just all the weapons that we have.”

Jones made the biggest impact in the contest, notching 14 points and a season-high 11 rebounds without her fellow frontcourt starter. Without putback buckets or midrange makes, Northwestern struggled to contain her.

After starting 68 straight games over the previous two years, Jones hasn’t been a constant figure in the starting lineup this season. Still, the senior hasn’t seen any dip in confidence. She’s the team’s most efficient shooter at 56.2 percent and is capable of taking her game to another level when others are struggling.

“I just knew that we had to really pick it up for [Austin],” Jones said. “She does a lot down low, like getting rebounds, scoring, so I knew that me and Kaila, Faith, anybody down low had to pitch-in and step up for her, too.”

With star forward Kaila Charles incapable of finding her shooting stroke, the Terps needed more than just Jones’s efforts to secure the victory.

Various players stepped up alongside Jones. Guard Ashley Owusu scored six of her 13 points in the third quarter while adding three assists in the frame, helping to take control of a game that was in the balance.

And in the fourth, forward Faith Masonius’s energy helped her team balloon its two-point lead to double-digits with a stretch of tough rebounding, smart shot selection and drawn fouls.

With Owusu and Masonius joining Jones with timely performances, the Terps continued a five-game winning streak through their all-around team effort.

“I thought Faith was sensational off the bench. Her timing was right in some of those plays we needed,” Frese said. “I thought she got some of our offense going. Just a high-level player making plays for us.”

Guards Blair Watson and Taylor Mikesell also helped secure the win with momentum-swinging jumpers during the contest. They combined for five triples and made life difficult for Wildcats guards, with Watson’s steal-and-score late in the final frame putting the exclamation point on the victory.

In a game which the Terps could have let slip away during a bad stretch to start the second quarter after Austin injured her ankle, they instead came together to put forth one of their most collective efforts of the season.

And while it’s unclear if Austin will miss time, Maryland believes its depth is what separates it from the pack.

“Since the Iowa game it’s become a player-led team, and you can just feel it every day where they’ve set the bar, the standard that they’ve set in practice,” Frese said. “So they’ve really taken ownership and accountability of their season, and you’re able to see this growth.”