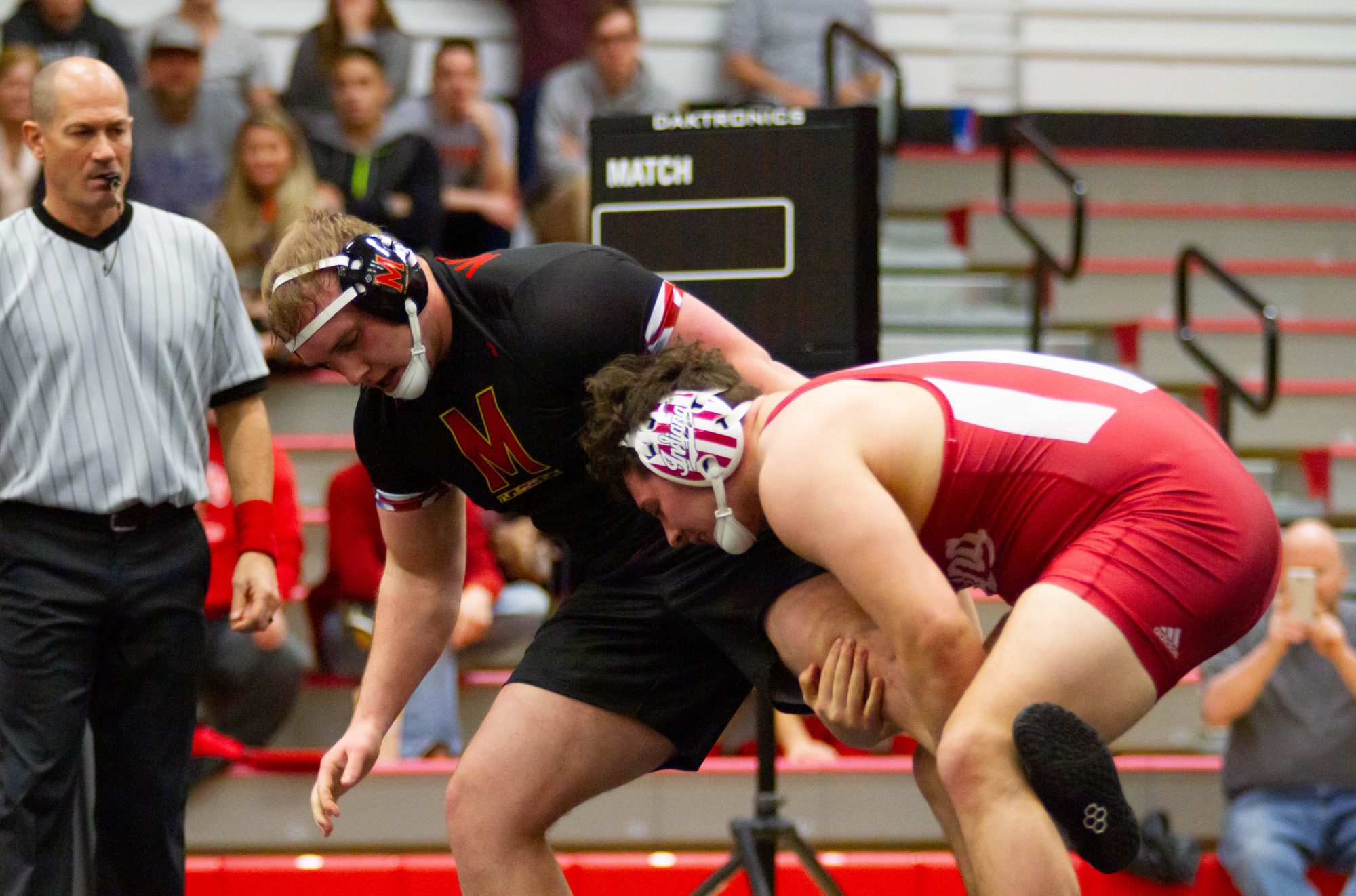 The Xfinity Pavilion crowd’s cheers crescendoed to roars at the conclusion of the 197-pound bout on Sunday afternoon against Indiana, as Jaron Smith’s 7-2 decision tied the dual at 16.

The Terps would have had a chance to win a Big Ten dual for the first time in over four years with one bout remaining. It came down to the heavyweight bout and redshirt freshman Parker Robinson, who had just one win to his name.

The excitement would subside, though, as Robinson’s inexperience proved to be the deciding factor in an 8-3 decision loss, giving the Hoosiers a 19-16 dual win. But while being on the wrong end of conference losses has become the norm for Maryland, Sunday’s tight defeat was a step in the right direction under first-year coach Alex Clemsen as he works to build his team into a formidable Big Ten foe.

“The good thing is, we are getting in these fights and as we get in these highly contested bouts, we’re going to be well-prepared for the Big Ten tournament,” Clemsen said.

Sunday’s end result looked like a far cry from what could’ve been after Maryland lost the first four bouts of the dual, continuing a trend of failing to get off on the right foot.

However, following 157-pounder Jahi Jones’ win to get the Terps on the board after trailing 13-0, the momentum shifted. Jones not only earned Maryland’s first points, but got the home crowd into the match. And by the time Robinson’s heavyweight bout got underway with the match on the line, the crowd was fully behind the team.

“When everyone was cheering Parker’s name and the crowd was getting riled up, he heard that and I think that made him wrestle a lot harder,” 165-pounder Kyle Cochran said.

Cochran was also a key cog in Maryland’s near-win. The redshirt sophomore has won six of his past eight bouts, including a major decision Sunday against the Hoosiers. His presence in the middle of the lineup — along with Jones, 184-pounder Kyle Jasenski and 197-pounder Smith — has been much-needed as the Terps continue to fall behind early in duals.

While that group’s prosperity hasn’t generated a recent win — Maryland is currently on a seven-dual losing streak — the team has bought into Clemsen’s plan.

“He has a lot of faith in me, a lot of belief in me,” Cochran said. “I trust his process and his system.”

There were plenty of positives from Sunday’s outing, such as Maryland’s four bout wins in the dual — doubling its total from its three previous duals combined. And last year, Indiana crushed the Terps in Bloomington, 36-3, so the 19-16 result was an improvement.

However, Clemsen is not one for moral victories and neither is the team. After the loss, he told his wrestlers to come in with “their hard hats on” as he started Monday’s practice at 7 a.m., hoping to get in two training sessions and balance academics on the first day of the spring semester.

In the midst of widespread change under a new coach, the team has done well adapting, but problems still persist. Not all of the work in practice has translated onto the mat during duals, so positives included, there’s still much to be done moving forward. Sunday’s tight loss was a stepping stone, but it’s merely the beginning of where the Terps hope to be.