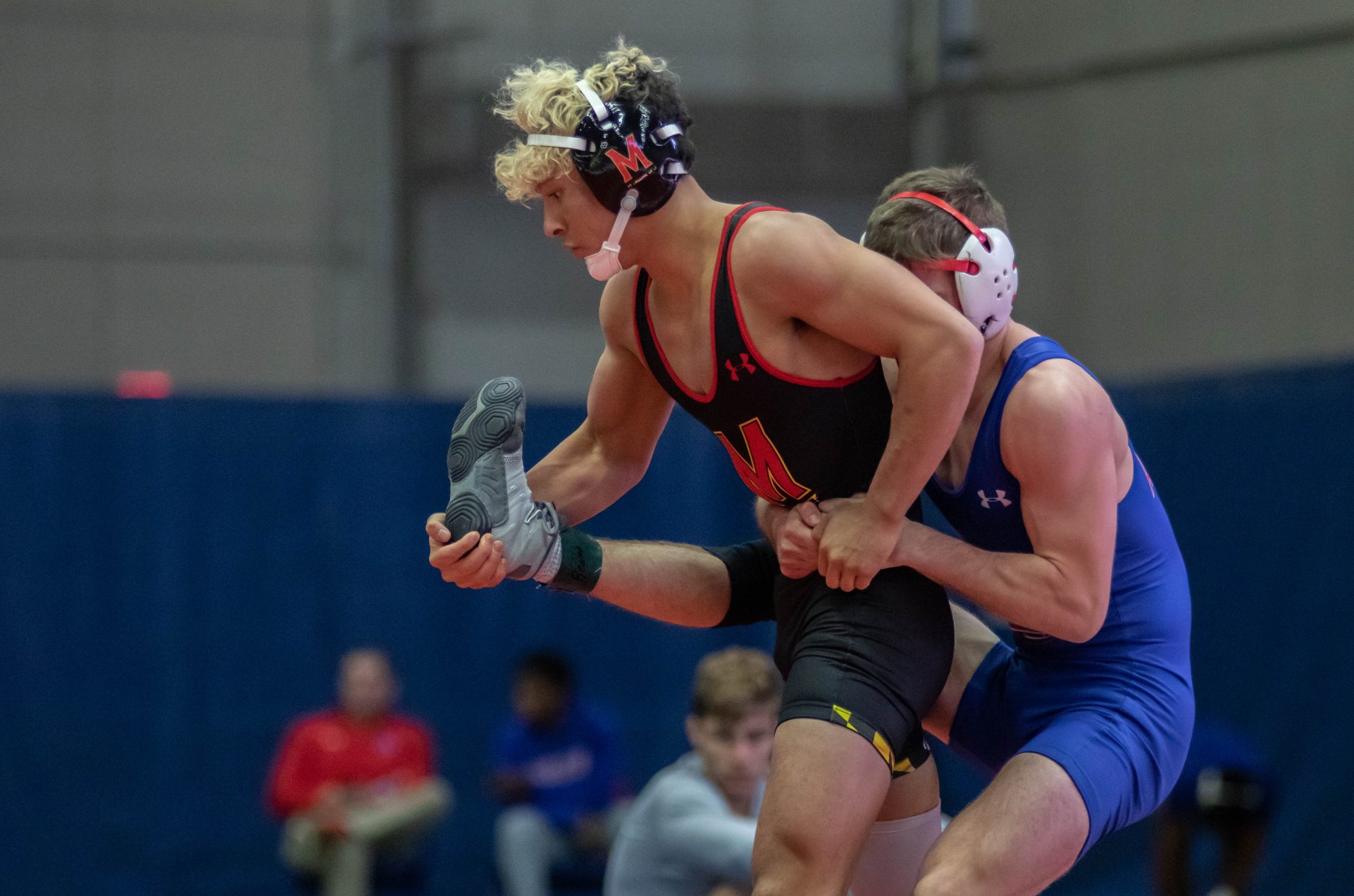 When Maryland wrestling’s lightweights walk onto the mat and a meet begins, there’s more to it than an opportunity to grab an early lead. Those lightweights have a responsibility to build momentum for the teammates that follow them.

That extra pressure can weigh on the Terps’ lightweights, and early in the season, the results early in duals haven’t led to opportunities for meaningful bouts late in them.

In the midst of a five-meet losing streak, difficulties early have often dug holes on the scoreboard. And for the lightweights, Sunday’s shutout loss to Michigan State marked the continuation of an especially tough stretch. In that matchup, Maryland lost three of its first five dual bouts for the seventh time in eight matches.

“If we start the match off flat, that’s going to affect the whole team,” 133-pounder King Sandoval said. “As a collective unit, me and Brandon [Cray] try to bring the energy at the beginning of the dual so that the whole house can function. It’s adds a lot of pressure, but we try our best to start off the dual as such.”

[Read more: Maryland shut out for first time this season in 36-0 loss at Michigan State]

For Maryland, the early-match impetus is placed on Sandoval, 125-pounder Cray and 141-pounder Hunter Baxter. The trio has been a mainstay for how the Terps have begun matches this season.

However, the three haven’t found consistent success on the mat. Coach Alex Clemsen said Sandoval was around more in the summer than the other two, and as a result, Cray and Baxter have been trying to catch up to the former.

While there are technical things that the trifecta needs to clean up, it’s more than just a few missed positions.

“Your work breeds confidence,” Clemsen said. “So, if guys aren’t confident in their skill set or their strengths, they need to do more.”

Confidence can breed success, but that has been a hard thing to come by as results continue to go the other way.

“It’s been a rocky road recently,” Sandoval said. “We’re really nervous when we go out there and because of our history as a program, I feel like we’re looked down upon. I feel like that’s part of the reason why we’re nervous.”

When Maryland joined the Big Ten, it became a part of the strongest wrestling conference in the country. And since 2015, the Terps have secured just one conference dual meet win.

Even for those who have experienced the rigors of wrestling against programs such as Penn State and Iowa, the individual challenge each meet is steep. And it’s especially pronounced for the first wrestler on the mat, attempting to win a bout while uplifting his teammates, too.

Cray, who leads off meets at 125 pounds, holds a 1-8 dual record this season after recording eight dual wins in 2017-18 and four in 2018-19. While he’s lacked the success of previous campaigns, he trains with the same intensity that he would while on the mat. He hopes that preparation will translate into wins.

“Every day we practice is just another day to focus on getting better,” Cray said. “I feel like keeping that mindset of constantly progressing and evolving in the sport will lead to better things.”

Oftentimes, how a wrestler matches up with his opponent plays the largest part in how the bout will play out. It’s a difficult situation to be in when facing the country’s best on a weekly basis.

That’s where Clemsen has stepped in, trying to change the culture of the program and build from the ground up for future success.

“One thing Clemsen’s been putting a big emphasis on is buying in and believing,” Cray said. “Ultimately, it’s having that full faith in the coach, which the whole team has been doing. We know he’s leading us in the right direction and as time goes on, we’re going to see better results.”

It won’t be an immediate turnaround for Clemsen and his squad. So while the season has been disappointing in terms of results, Sandoval said the team is just a few points here and there away from finding increased success.

“We just have to do it for seven minutes, not three and four and five,” Clemsen said. “We just got more work to do.”