Maryland wrestling is looking for more from lightweights after losing to Navy, Rutgers 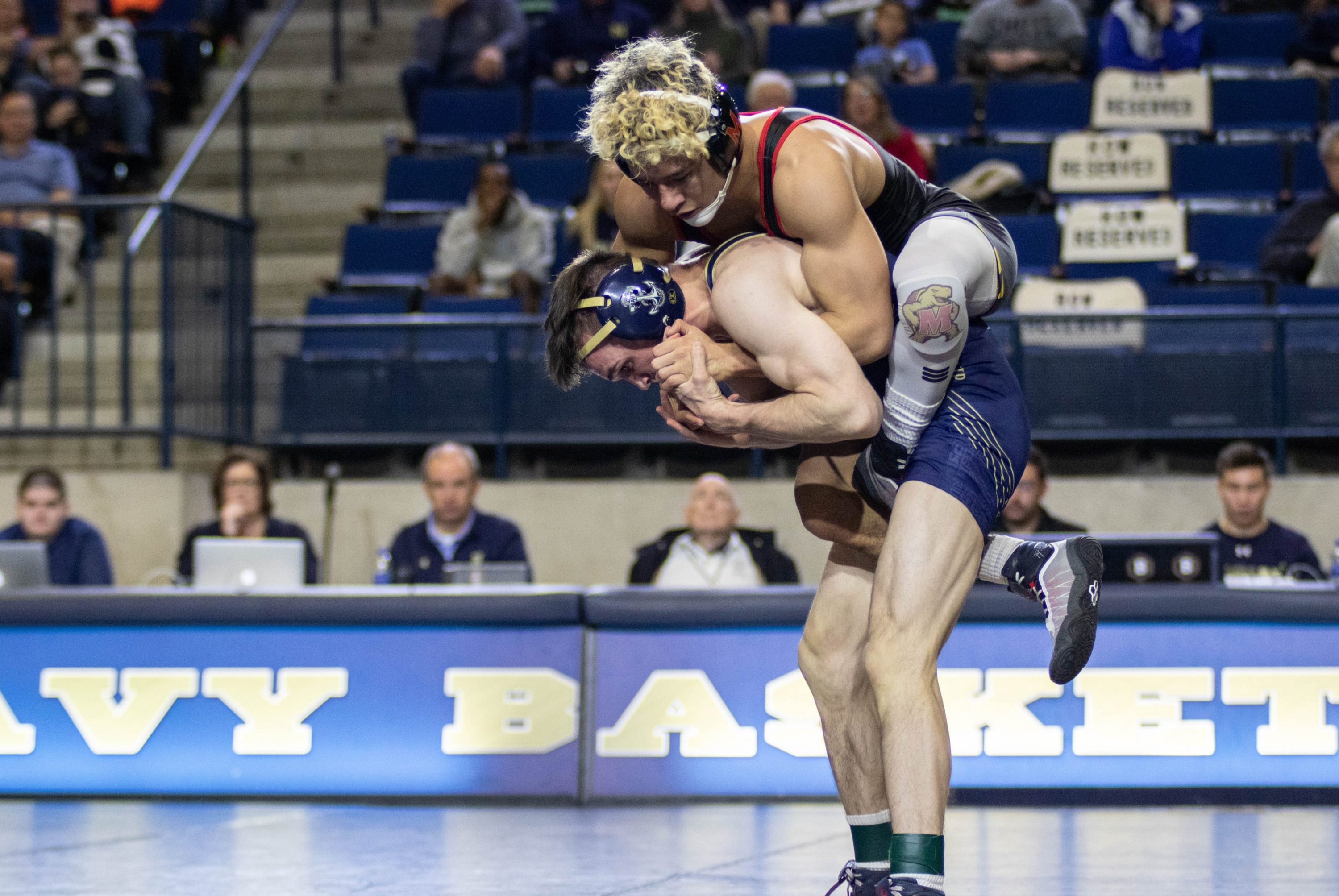 133-pounder King Sandoval rides the back of Navy's Casey Cobb in his 5-2 bout loss during Maryland wrestling's 21-12 loss to the Midshipmen on Dec. 6, 2019. (Julia Nikhinson/The Diamondback)

After falling behind 9-0 in an eventual loss to Navy on Friday, Maryland wrestling found itself in another early hole against Rutgers Saturday night through the first two bouts.

Trailing by nine yet again, the Terps turned to Hunter Baxter in the 141-pound matchup to try and flip the momentum. He faced off against freshman JoJo Aragona, the No. 1 recruit in his weight class and No. 6 overall recruit in the class of 2019, according to FloWrestling.

In Aragona’s first Big Ten bout, he got a takedown of Baxter within 40 seconds, the deciding factor in a 2-0 decision. It was the third straight dual where Maryland lost the first three bouts, putting the team in a 12-0 match hole to extend a trend of slow starts in its 1-3 start to the year.

In reference to 133-pound redshirt freshman King Sandoval and Baxter, Clemsen is looking for more consistency.

Both have primarily participated in open tournaments as Terps, waiting their turns to enter the starting lineup. Through four bouts this season, both are 1-3 as they adjust to increased roles.

Of Maryland’s first three dual starters, the elder statesman is redshirt junior Brandon Cray, one of four redshirt juniors the Terps have thrown out in duals this season. And with 16 dual wins over the past two seasons, Cray’s 0-2 start is not indicative of his ability.

“We’ve challenged him,” Clemsen said. “I think he’s better than what he’s performed and I have faith in him that he’s going to rise to the occasion and he’s going to work himself out of this funk.”

The rough starts have been the glaring weakness during a tough three-dual stretch on the road against then-No. 24 Virginia, Navy and undefeated Rutgers.

This weekend began with the Midshipmen, who rode an early edge to stave off a Maryland comeback attempt in an eventual 21-12 win.

“Navy’s a really tough team,” redshirt junior Michael Doetsch said. “As much as they work out, everything they do, this is just fun for them. They’re putting in the effort, they’re working hard and I think it really showed.”

While its lightweights have underperformed, the Terps have gotten production from their upperweights, such as 197-pounder Jaron Smith, who secured two dual wins over the weekend. Six different wrestlers, four of whom were upperweights, secured wins over the two matches.

However, the focus is on finding balance throughout the starting lineup, rather than relying on back-end surges after falling behind.

After the loss to the Scarlet Knights on Saturday, Clemsen said progress won’t be made overnight. With two weeks to go before facing Pittsburgh on Dec. 20, there’s hope the extra time off can be used making headway on better starts to duals.

“It’s just all about, for us, letting it fly,” Smith said. “We put so much time, hard work and effort into this game that you gotta have fun with it. I think my whole team has the technique, the ability and the athleticism to beat anybody in the Big Ten, but we need to start gritting our teeth and wanting to win. We’re taking steps in the right place.”