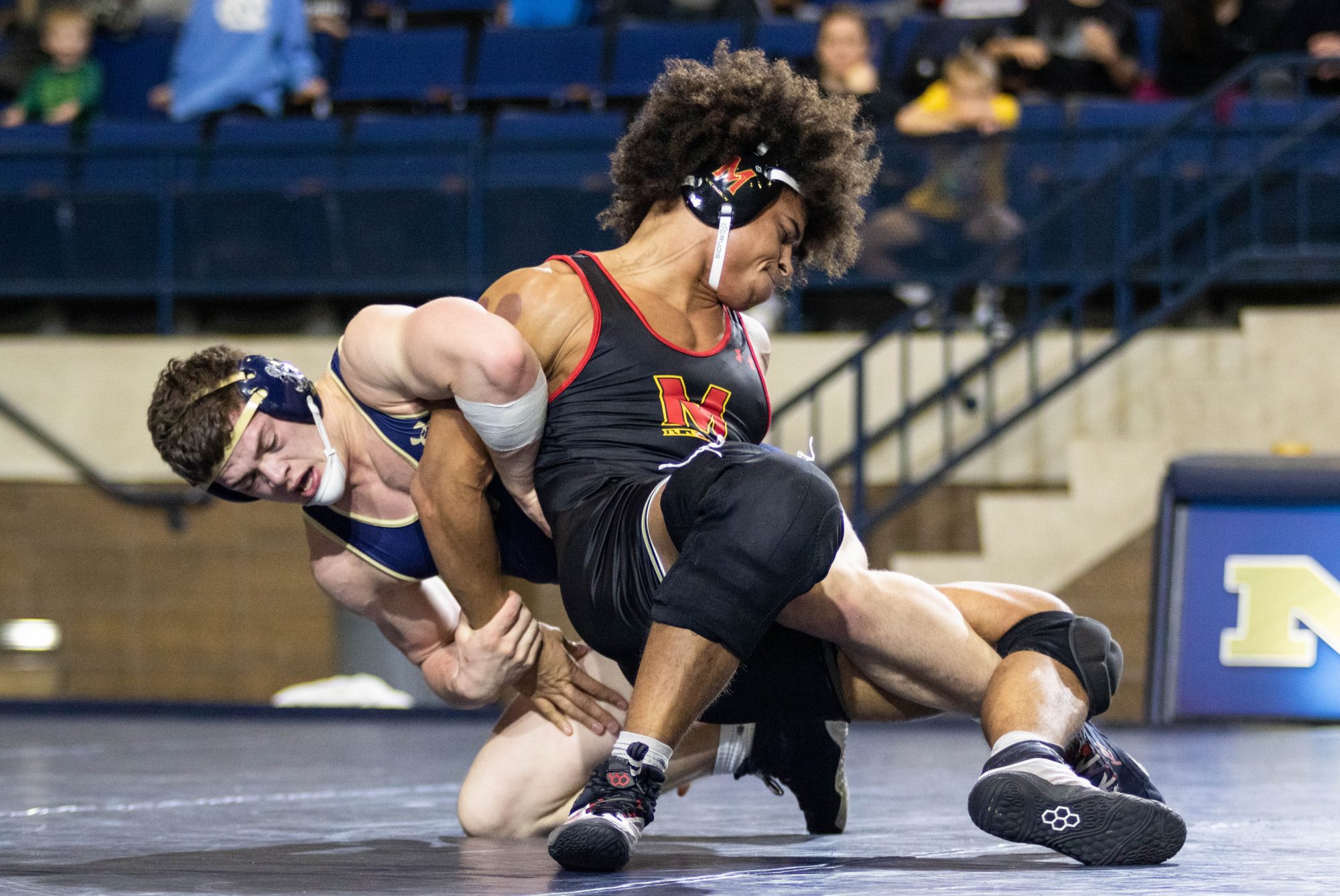 With its second dual in less than 24 hours, Maryland wrestling faced a quick turn-around after coming up short against Navy on Friday night.

The Terps traveled from Annapolis to Piscataway, New Jersey, in short order to take on a formidable Rutgers squad Saturday night. And for the second dual in a row, Maryland endured a slow start.

The Scarlet Knights recorded two pins in the first four bouts of the match, building an edge they wouldn’t relinquish. Though the Terps (1-3) were able to stage a strong comeback attempt Friday, they failed to do so Saturday, losing to Rutgers (6-0), 28-11.

“Overall, it was a hostile environment. It was a good environment,” coach Alex Clemsen said. “I think we needed to get a little more production out of our lightweights. Our upperweights battled hard again.”

Like Friday, the Terps lost four of their first five bouts in the match, falling into an 18-3 hole. Brandon Cray opened the match for the Terps in the 125-pound matchup, facing a top-15 opponent in No. 12 Nicolas Aguilar.

Cray and Aguilar were tied 3-3 after the first period, but with 36 seconds left in the second, Aguilar found his opening and got the pin to immediately put Rutgers up 6-0.

It didn’t get easier for the Terps, who faced off against another top-20 opponent with the 133-pounders. King Sandoval had No. 19 Sammy Alvarez to try to knock off, but Alvarez was dominant, taking the bout in a 9-4 decision.

Hunter Baxter tried to end the losing skid in his 141-pound matchup against JoJo Aragona, but after falling behind 2-0 in the first period, Baxter couldn’t get on the board, losing a 2-0 decision.

After a strong showing against Navy, 149-pounder Michael Doetsch sought to continue his success this season. But with less than a minute left in the second period, he was pinned by Gerard Angelo as Maryland went down 18-0 in the match.

The Terps got back to their winning ways with 157-pounder Jahi Jones and 165-pounder Kyle Cochran.

Jones faced off against perennial top-25 opponent Michael Van Brill, winning in a 6-2 decision. And Cochran, a New Jersey native, followed up with a 4-0 decision over Brett Donner.

“When I was on my feet, it was hard to get to his legs,” Cochran said. “He was a little shorter than me. I’m normally very offensive, but he was being mostly defensive. Once he went down, I knew I would be able to ride him out.”

The Terps trailed 18-6 at that point, but the deficit got bigger, as they would lose two straight decisions — including a tough-fought ranked matchup between No. 20 Philip Spadafora and No. 18 Joseph Grello.

Spadafora trailed 3-1 after the second period. While he was able to get an escape to close the gap to 3-2, Grello staved off a takedown as Spadafora lost in a 3-2 decision.

The 184-pounder Kyle Jasenski got into a 5-1 hole after the second period and couldn’t recover, losing a 7-3 decision to Billy Janzer.

Maryland was re-energized late with the 197-pounders as Jaron Smith took the mat against a top-15 foe, No. 14 Jordan Pagano.

Pagano tried to get a takedown on Smith by lunging low, but his position turned into a vulnerable one as Smith almost immediately got him on his back. Some 20 seconds later, he got the pin as Maryland closed the gap to 24-12.

“For me, it’s just trying to keep my position,” Smith said. “One of the first things [Clemsen] told us as a coach is position and then points. In the beginning of the match, I did a really good job of controlling my position. I dominate with my position and follow up with the points after that.”

That was as close as the Terps got late, failing to take the final bout in the battle of the heavyweights. Parker Robinson lost a 13-4 decision to Christian Colucci, and Maryland fell to 1-3 on the year.