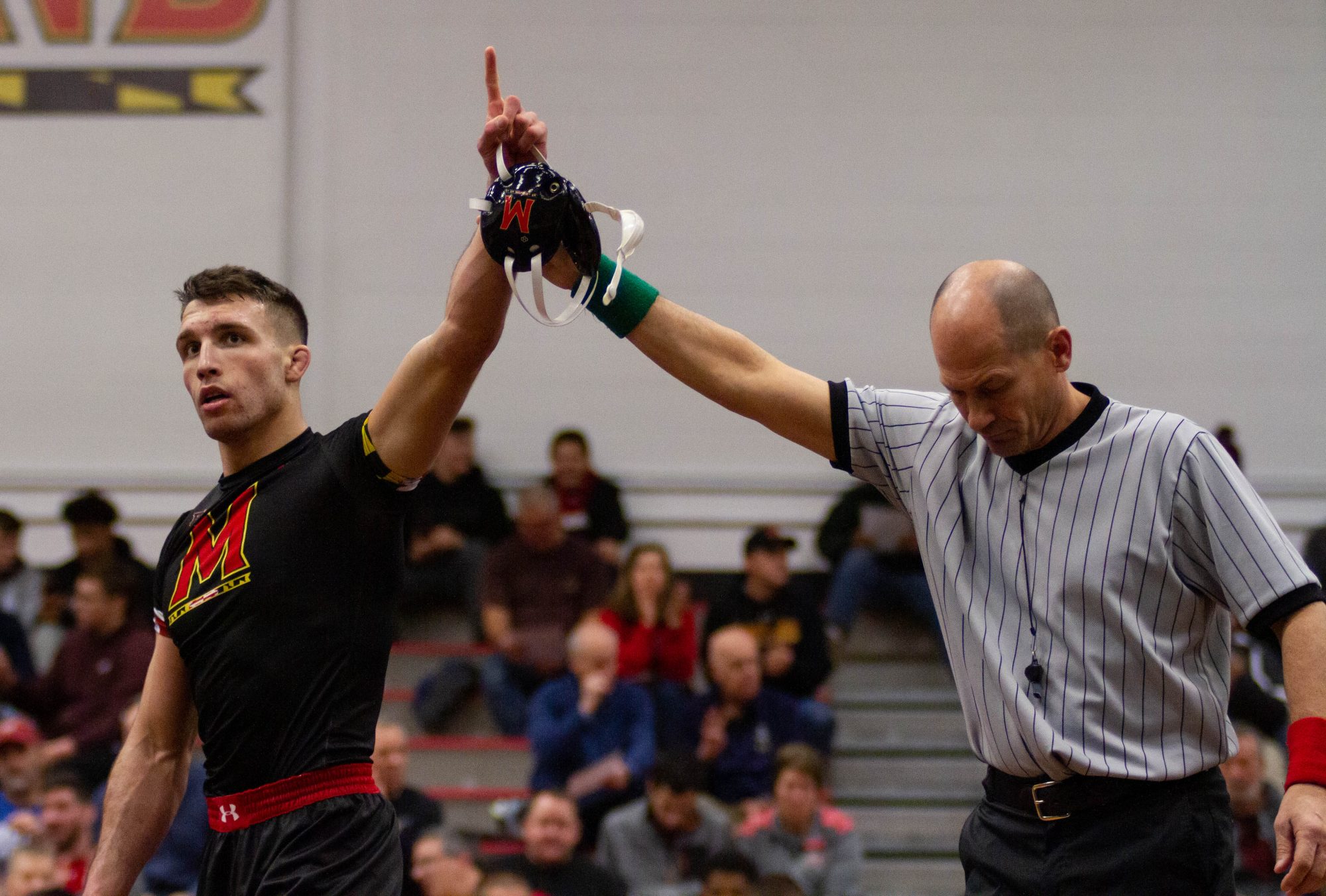 165-pounder Kyle Cochran gets his hand raised after a 12-0 major decision over Indiana's Dillon Hoey on Jan. 26, 2020. (Julia Nikhinson/The Diamondback)

Maryland wrestling was in a tough spot, down 13-0 to a winless Indiana program, with both teams searching for their first conference win of the season. The Terps put their trust in 157-pounder Jahi Jones, just off a suspension that took him off the mat for a few weeks.

Jones, a redshirt senior, faced senior Fernie Silva, who came into Sunday 0-6 in duals on the season. A hard-fought bout, with a takedown from Jones and two escapes from Silva, locked the score at 2-2 in the third period.

Jones started down, needing an escape to win. With 30 seconds left, he got that escape, fending off a late onslaught from Silva as Maryland trailed 13-3 going into the intermission. That sparked a three-match winning streak for the Terps, but it wasn’t enough as Indiana (1-6, 1-5 Big Ten), squeaked out a 19-16 win Sunday after a Maryland’s rally came up just short.

Sunday’s dual, like most this season for Maryland (2-11, 0-5 Big Ten), followed a similar trend as the Terps fell into an early hole, dropping one bonus point in the process.

There were chances had early on, starting with 141-pounder Hunter Baxter. The redshirt sophomore was locked up in a battle with Eddie Bolivar as the bout waned on into the third period.

Bolivar held a 6-3 lead into the final minute, so Baxter needed an escape and a takedown to force overtime and a chance to take the bout. He got the escape and nearly got the takedown with roughly 30 seconds left, but never secured it, losing a 6-4 decision.

The Terps had an upset bid at 149 with Michael Doetsch, who took a 2-1 lead over No. 16 Graham Rooks but allowed an escape and takedown, losing a 4-2 decision.

Jones’ victory got things started for the Terps, as 165-pounder Kyle Cochran followed with a 12-0 major decision.

“We were in the hole four matches and [Jones] got us going,” Clemsen said. “The thing that stinks about that is we had an intermission and Kyle had to go and basically get us restarted and he did a good job of battling. Both of those guys put us in good positions to get good outcomes.”

Cochran nearly pinned Dillon Hoey, wrestling up a weight class for the Hoosiers, but took the four points — his sixth dual win in his last eight as Maryland cut the lead to 13-7.

“Coming into the match, I felt confident,” Cochran said. “I had won the match on Friday, so I was feeling good, just trying to ride the wave and put all my faith into my training. …You ride a high after winning and I just want to chase that.”

For as much of a hole as Maryland fell into following its lightweights, the team was still in the match and it got help from unfortunate circumstances. With 20 seconds left in the first period of the 174-pound bout, Indiana’s Jake Covaciu exited the mat to enter concussion protocol.

When he returned to the mat, his headgear was off and Philip Spadafora won via medical forfeit, tying the dual at 13-13.

In the next bout, 184-pounder Kyle Jasenski wasn’t able to get separation, falling in a 7-2 decision to Jake Hinz as the Terps trailed 16-13.

Maryland tied the score again — this time at 16-16 — after a gutsy performance from 197-pounder Jaron Smith, who secured a 7-2 decision win over Nick Willham.

“I was looking to try to get as many points as possible,” Smith said. “There was an opportunity where I could’ve got the major decision. I was looking for every opportunity to get the most points I could, but at some point, you gotta settle for the decision.”

That left the match up to heavyweight Parker Robinson, who came into Sunday 0-12 in duals, to secure any type of win to break a four-year conference losing streak.

The noise in the pavilion spiked, but despite having the crowd behind him, Robinson couldn’t fight off Indiana’s Rudy Streck as Maryland’s bid for a conference win ended just short.

“It burns. It hurts. It pisses me off,” Clemsen said. “We wrestle in the best conference and wins are hard to come by. It was definitely a good chance and we should’ve capitalized and we didn’t. We let it slip away.”