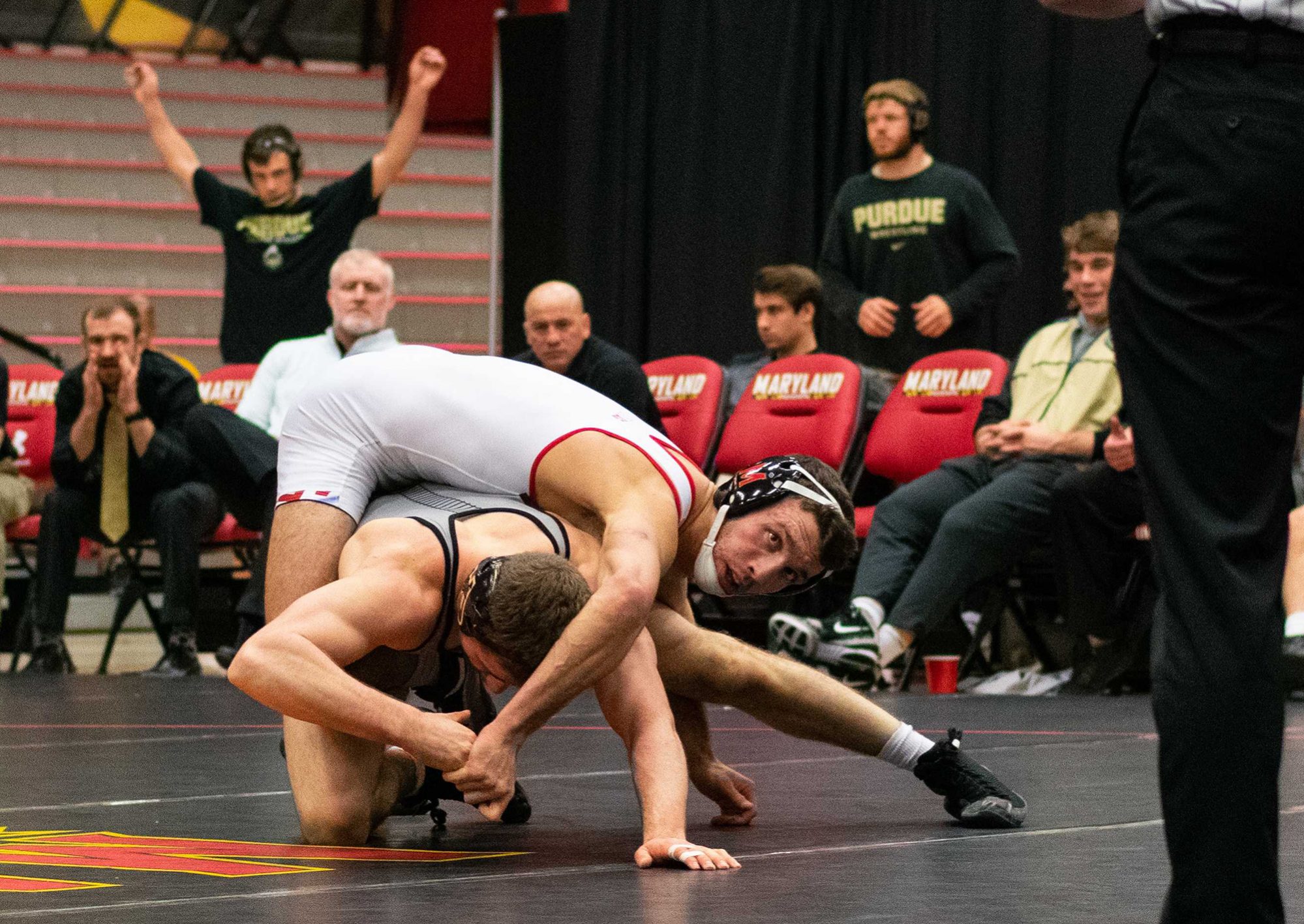 With time winding down in the third period of their 133-pound bout, King Sandoval was in a 6-1 hole against No. 13 Purdue’s Travis Ford-Melton, struggling to find any way to narrow the deficit.

In the down position, Sandoval escaped, needing a takedown and near-fall points to make a miracle comeback.

While Sandoval secured the much-needed takedown, Ford-Melton wouldn’t allow anything more. He closed out a 6-4 decision victory for the Boilermakers, who took an early 8-0 lead over Maryland wrestling on their way to a 37-4 dual win.

It started out rough as the lightweights, who have struggled throughout the season, fell victim to a balanced Purdue lineup.

Three of the Boilermakers’ first five wrestlers were ranked — two in the top 10 — so the Terps would need a strong start out of the gate. That didn’t happen, though, as Maryland dropped its first five bouts of the dual.

Sandoval’s two-point loss was the closest bout other than 157-pounder Jahi Jones, who made his return to the mat following a two-match suspension. Jones had a tough task ahead of him against No. 8 Kendall Coleman, who came in with a 9-2 record in duals on the season. Still, Jones pushed Coleman early on.

Jones’ opportunity to claw back came in the third period, but Coleman was too much for him. The rust from not wrestling since Jan. 11 showed as Coleman took a 10-4 decision to give Purdue an 18-0 lead at intermission.

For the first time in 18 bouts dating back to Michigan last Friday, Maryland got its breakthrough in the form of 165-pounder Kyle Cochran, who came out firing against an inexperienced Tanner Webster.

[Read more: Maryland shut out for first time this season in 36-0 loss at Michigan State]

Webster was 1-2 in duals coming into Friday night, and it showed, as Cochran racked up five and a half minutes of riding time on his way to a dominant 11-0 major decision victory. The redshirt sophomore is now 5-2 in his past seven matches.

Points were hard to come by, despite the four ranked wrestlers the Boilermakers featured in the dual. The Terps did get better performances after the intermission, specifically from Cochran and 184-pounder Kyle Jasenski.

Jasenski was down 4-2 after the second period to Max Lyon, but he was too much in the third period, outscoring the Terp 3-0 on his way to a 7-2 decision.

Coach Alex Clemsen took a different approach at 197, opting for Niko Cappello instead of usual starter Jaron Smith to face No. 7 Christian Brunner, but that ended up backfiring as Cappello was pinned within 90 seconds of their bout, digging Maryland into an even bigger 31-4 hole.

Maryland ended the match on a sour note, getting pinned at 197 and the heavyweight bout as Purdue, which had dominated from the start, continued to impose its will until the end as the Terps’ conference dual win drought continued.