While its top trio took over, Maryland basketball got little help elsewhere vs. Wisconsin 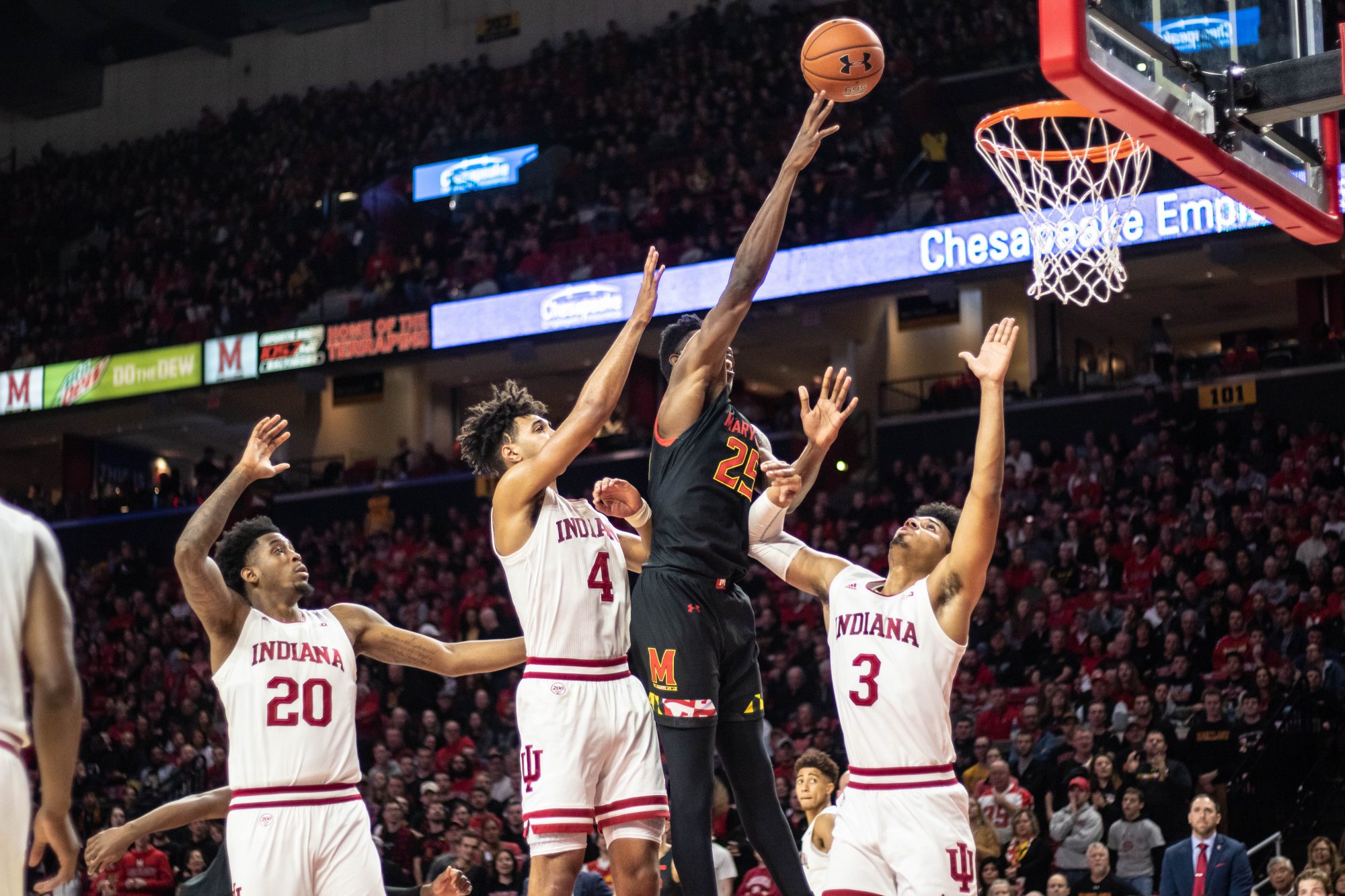 Forward Jalen Smith fights off multiple Indiana defenders to rise for a shot in Maryland men's basketball's 75-59 win over the Hoosiers on Jan. 4, 2020. (Julia Nikhinson/The Diamondback)

Just as guard Aaron Wiggins’ driving layup fell through the hoop with 2:30 remaining, No. 17 Maryland men’s basketball’s reserves sprung to their feet to celebrate the bucket that gave their team a 52-51 lead over Wisconsin.

The next bench outburst came a minute later when forward Jalen Smith threw down an alley-oop dunk off a lob from guard Anthony Cowan to extend the Terps’ lead to 54-51 with about a minute and a half left.

Throughout the game — and especially late — the trio of Cowan, Smith and Wiggins converted the shots Maryland needed to have a chance to win on the road. Their teammates celebrated those scores — which totaled 47 points, including all 25 of the team’s output in the final 16 minutes — but couldn’t muster up much else to support them on the offensive end in the Terps’ 56-54 loss.

“It is what it is. And Donta [Scott] had some good looks and missed them. Eric [Ayala] didn’t really get a lot of shots,” coach Mark Turgeon said. “We’re a work in progress.”

Before the season began, Cowan, Smith and Wiggins were expected to consistently be the bulk of the scoring production.

Cowan, now a senior, led the team in points per game last season. Smith had a breakout NCAA tournament that fans hoped would propel his sophomore campaign. And many expected Wiggins to show marked improvements as a scorer in his second year.

Maryland fans saw just that Tuesday night against the Badgers.

Cowan orchestrated the Terps’ offense to the tune of 16 points and three assists. Smith showed off versatility, knocking down two 3-pointers and showing an improved skill set around the rim en route to a team-high 18 points. And Wiggins broke out of a shooting slump by going 3-for-6 from three-point range as part of his 13-point night off the bench.

“[He] came in, played big minutes,” Cowan said about Wiggins’ effort. “We need that from him. He’s slowly getting his confidence back. So, we just keep needing that from him for the rest of the year.”

What Maryland fans did not see Tuesday night, though, was the expected supplemental production elsewhere.

The top three scorers Tuesday night shot 17-for-33 from the floor, including 7-for-14 from deep. The rest of the team combined to shoot 2-for-14 overall, and 0-for-8 from beyond the three-point arc.

Turgeon inserted Ayala into the starting lineup for a struggling Wiggins, as the ninth-year coach altered that group for the first time in over a month. Wiggins responded to his role change with a slump-busting performance, while Ayala matched his two-point showing against Iowa.

“[We] gotta get him going,” Wiggins said of Ayala. “I think he’ll figure it out. I don’t think there’s anything to worry about.”

In the final 16 minutes of the game, Cowan, Smith and Wiggins shouldered the responsibility for helping the Terps attempt to secure an elusive road victory.

They were up to the task, scoring 25 points collectively on 9-for-16 shooting. But with meager contributions elsewhere, Maryland couldn’t survive the Badgers and guard Brad Davison’s late-game heroics.

For the Terps to be successful in the cutthroat Big Ten conference, they’ll need players outside of Cowan, Smith and Wiggins to contribute more than just the reactions that come after those group’s buckets; they’ll need their depth scoring to reinforce the efforts of that trio.

“We’re a resilient team,” Wiggins said. “We’re going to bounce back. We’ve got the guys to do it.”