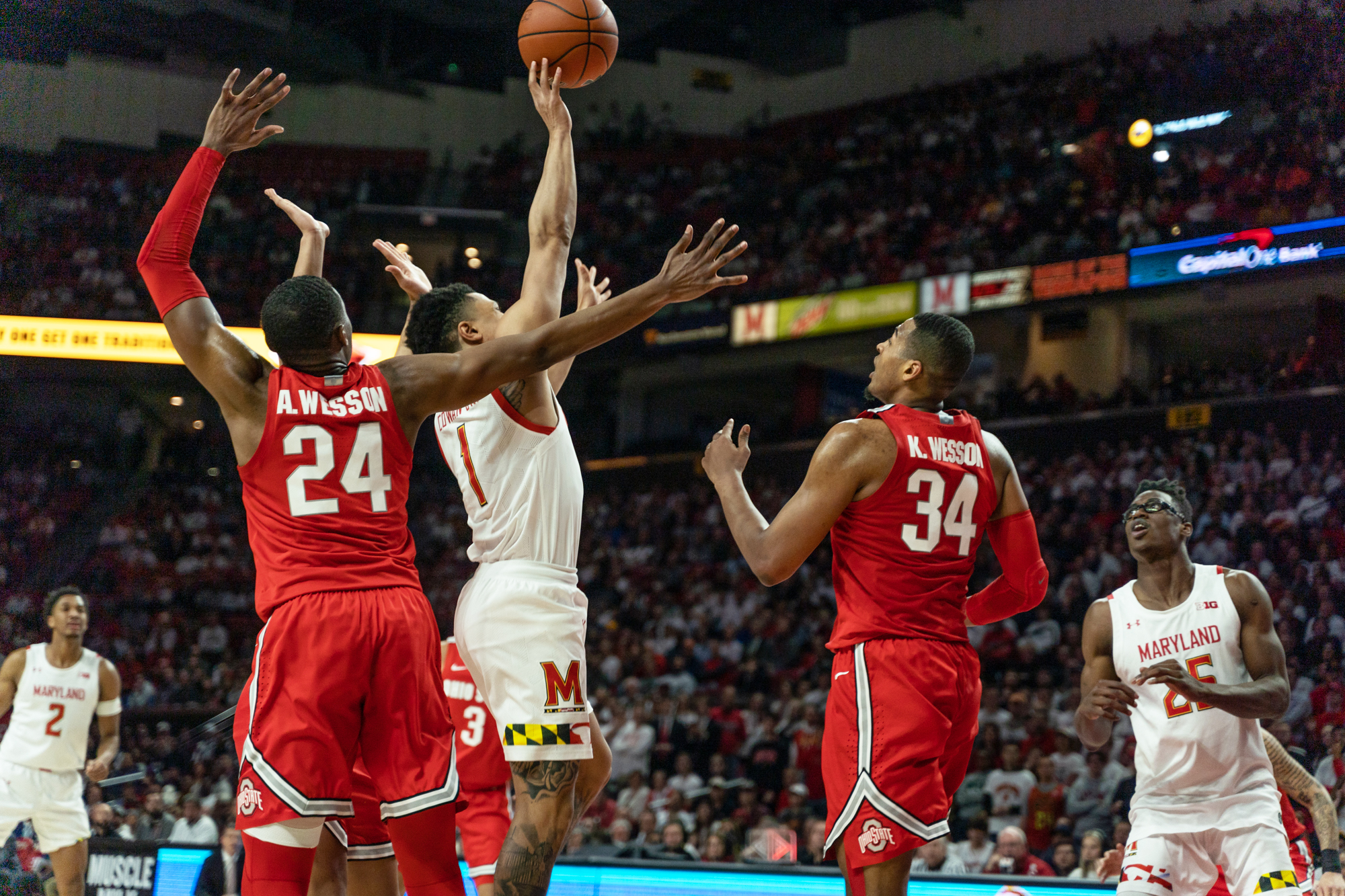 MADISON, Wis. — Moments earlier, there had been boos from the Kohl Center crowd directed toward guard Brad Davison, who was unable to create any separation from forward Jalen Smith and heaved a desperation 3-pointer as the shot clock expired in hopes of securing Wisconsin a lead once more.

But three seconds of game time later, the crowd erupted for the 6-foot-4 Davison, whose hustle play on No. 17 Maryland men’s basketball’s ensuing inbound forced a turnover and led to his triple in the corner, a dagger in the Terps’ hopes of securing that elusive first true road victory of the season.

After the game, after the craziness of Maryland’s last possession ended in two misses from deep and the 56-54 scoreline went final, Wisconsin forward Micah Potter lifted Davison into the air. If it hadn’t been for the Maple Grove, Minnesota, native’s late efforts, Tuesday night might have ended differently.

Instead, it ended with the Terps trudging from the floor, wondering where another road game went wrong.

Holding a one-point advantage, guard Darryl Morsell stood beneath the rim for a critical inbound pass with 13 seconds left. In the preceding timeout, Turgeon made clear that guard Anthony Cowan was the preferred destination for the pass. And the Terps had a timeout remaining — they didn’t need to force it.

But Morsell did, and Davison stole the ball and threw it off Morsell, who still stood out of bounds.

“Obviously, I didn’t draw a good enough play to get the ball inbounds,” Turgeon said. “We had a timeout. We were aware of that. No one called it. Trying to get the ball to Anthony. So, give them credit on that play.”

Morsell had also glanced at guard Eric Ayala, who was the second option if Cowan wasn’t free. Cowan made a cut underneath the hoop, attempting to shake the double-team on him.

But he couldn’t find space, setting up Davison’s winner.

“Wisconsin is a really good team,” Cowan said. “They just made plays down the stretch.”

Entering Tuesday’s contest, Maryland hadn’t won in a true road test. It had a chance early in Big Ten play, when Turgeon’s squad went to State College. Yet the Terps shot 33 percent and lost by seven. And they had a chance in Newark against Seton Hall, against a team without its top two scorers. Instead, Maryland lost a narrow 52-48 contest, done in by 27 percent shooting.

Most recently, on Friday in Iowa City, the loss wasn’t even that close. The Hawkeyes ran away with an 18-point victory while the Terps shot 32.7 percent, and two of their sophomore guards — Ayala and Aaron Wiggins — were held scoreless from the field with a combined seven turnovers.

Wiggins came off the bench for the first time this season and showed improvement from his last outing, hitting three times from deep as part of his 13 total points.

“We played a lot tougher, being on the road,” Wiggins said. “We competed, we came to play. We competed as if we all really wanted to win, and in the end, you didn’t get the outcome you wanted. But I think in college basketball it’s tough right now. It’s tough to win on the road.”

Scoring droughts — the first lasting nearly three minutes and the second lasting over five — offered Wisconsin a chance to pull away. But Maryland matched the Badgers with four triples in the opening 20 minutes, ensuring the halftime deficit was only five. And with the help of a 3-2 zone out of intermission, Turgeon’s side turned that into a three-point lead of its own following triples from Smith and Cowan.

It was those two who led the Terps down the stretch, with Cowan darting into the lane to hit running layups or fall-away jumpers while Smith posted 18 points with nine boards. With Wiggins appearing to buck some of his shooting woes of late with a 4-for-8 performance, Turgeon’s side formed a narrow edge.

Another drought, however, offered Wisconsin a route back into the contest. When Maryland failed to hit from the field for nearly five minutes, a five-point advantage slimmed to one.

Even after Davison missed his three-point attempt with 13 seconds remaining, he’d get another opportunity when he knocked the inbound away from Cowan and threw it off Morsell, who still stood out of bounds as the inbounder.

Then, on Wisconsin’s inbound underneath its basket, Davison got free in the corner and sank that trey, the one that gave his team a two-point edge.

Cowan had a chance with time expiring, one last chance to add to his 16 points and play savior. Turgeon had wanted Cowan to get to the rim, potentially forcing overtime. Instead, Cowan pulled up from deep. He liked his shot — “It’s a shot I usually make,” he said — but this time, it clanked.

“You just hope that you get what you want and we didn’t,” Turgeon said. “We blew it before that.”

And with it, Maryland sank to 0-4 in true road games this season. The Terps were close. But an inbound play gone bad gifted Davison and Wisconsin a prime opportunity. They wouldn’t miss.