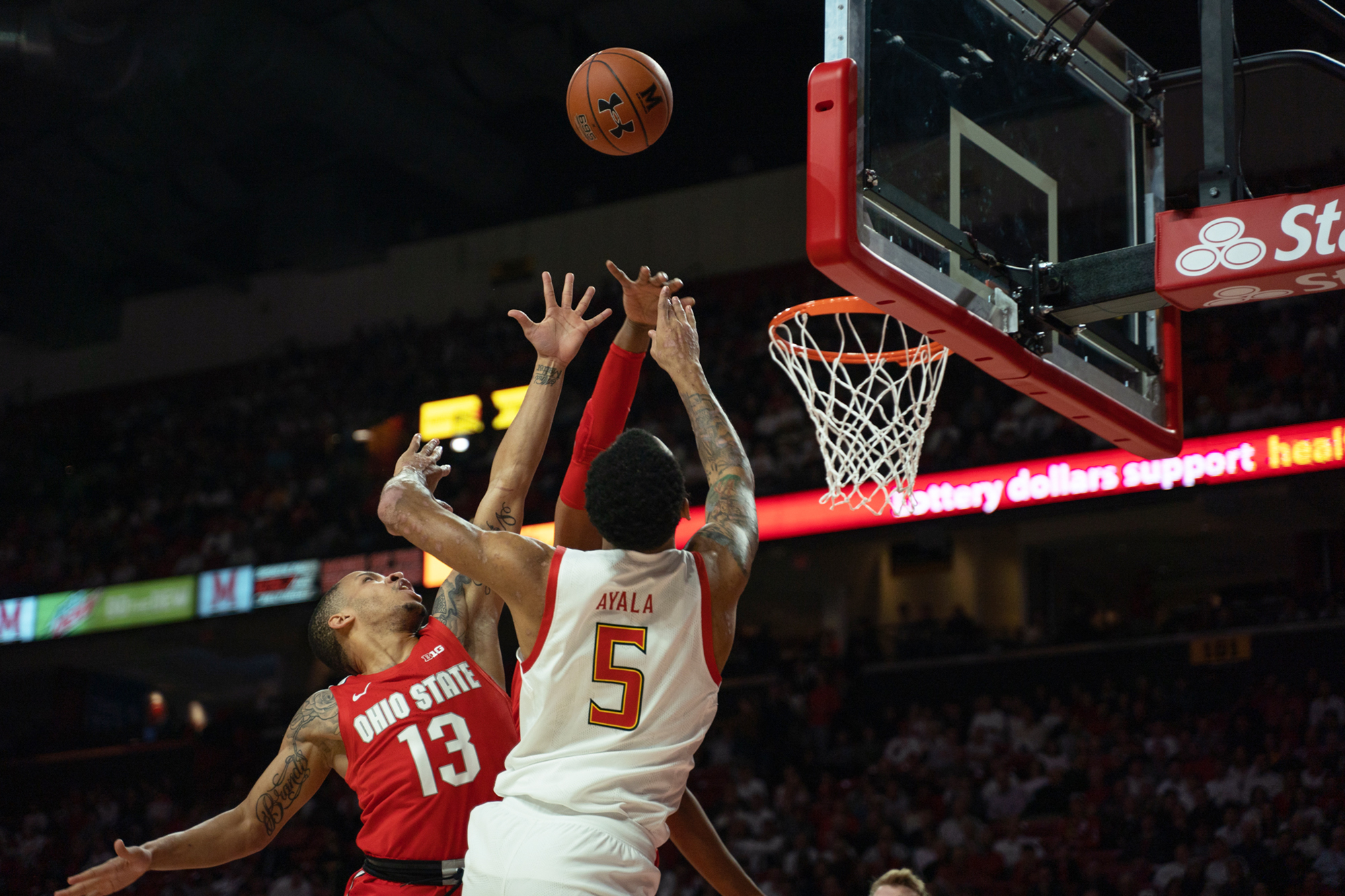 MADISON, Wis. — There’s more to basketball than scoring, and while No. 17 Maryland men’s basketball relied on three players for 87 percent of its offensive output in a two-point loss to Wisconsin on Tuesday and could’ve used an additional facilitator, that was the resounding message postgame.

There wasn’t much attention paid to guard Eric Ayala’s two turnovers or his 1-for-4 shooting in 29 minutes on the floor. Instead, his backcourt teammates propped up the struggling sophomore, who is now 1-for-10 with four points in the Terps’ past two road losses.

They focused on the things that don’t show up in a box score — his leadership, his defensive intensity and a belief that he’ll bounce back. They focused on building him up rather than tearing him down.

So despite another meager offensive showing from Ayala in the Badgers’ 56-54 win, his teammates did what teammates tend to do — they issued a vote of confidence in the 6-foot-5 guard, a hopeful discourse rather than a gloomy outlook.

“He did a really good job just being a point guard today,” guard Anthony Cowan said. “He didn’t really force too much. He looked for the open player. Even though he wasn’t scoring as much, this was one of his best games he had this year.”

Using quantifiable stats, Ayala has had much better performances. The Wilmington, Delaware, native scored 15 points in Maryland’s first road loss against Penn State. He scored in double-figures in seven of the Terps’ first 11 games. While he had three turnovers, he doled out four assists and added nine points when his team knocked off then-No. 11 Ohio State.

Lately, though, Ayala hasn’t factored into the offensive equation as much. He scored just two points against Iowa, and despite moving into the starting lineup for just the sixth time this season against Wisconsin, the issues that plagued him Friday against the Hawkeyes seemed to return.

A nice move down low secured him his lone field goal, but Ayala shot 0-for-3 from long distance — dropping his conversion rate on three-point shots to 23.7 percent — and threw the ball away twice in the second half.

Still, Ayala impressed his teammates with the little things. It may not have led to a win Tuesday night, but they believe the kind of effort needed to buck a cold spell was on display.

“He led. I mean, vocally, he was engaged, just making sure guys were locked in,” guard Aaron Wiggins said. “You know, he guarded defensively, I think he did his role well. … He did a good job vocally, just being that guy to lead, help with guys’ confidence, get guys shot, create open opportunities for people.”

[Read more: While its top trio took over, Maryland basketball got little help elsewhere vs. Wisconsin]

Turgeon called Ayala’s performance in Sunday’s practice one of the best he’s had this season. He rewarded Ayala with a place in the starting lineup on a court he had compiled one of the best games of his career a season ago, hitting four triples as part of his 18 points.

Ayala couldn’t get going offensively this time, though, along with his teammates not named Jalen Smith, Cowan or Wiggins. Turgeon was visibly frustrated with one of Ayala’s decisions — chucking up a 3-pointer shortly after the Terps secured an offensive rebound — but was pleased with the rest.

“Eric didn’t really get a lot of shots, took the one on the offensive rebound,” Turgeon said. “But thought his floor game was really good, got us into stuff.”

With Wiggins’ 13 points on 4-for-8 shooting, it appears as if one of Maryland’s struggling sophomores broke out of whatever mire afflicted him against Iowa. Ayala isn’t there yet — at least, not in scoring.

There are other ways to influence the team, though, and it’s those areas that Ayala’s teammates feel can fuel a return to form. But after a second straight road loss, they’ll be hoping Ayala’s turn in fortunes comes sooner rather than later.

“He’ll figure it out,” Wiggins said. “I don’t think there’s anything to worry about.”