“He’s relentless”: Now a starter, Donta Scott has made his mark for Maryland basketball 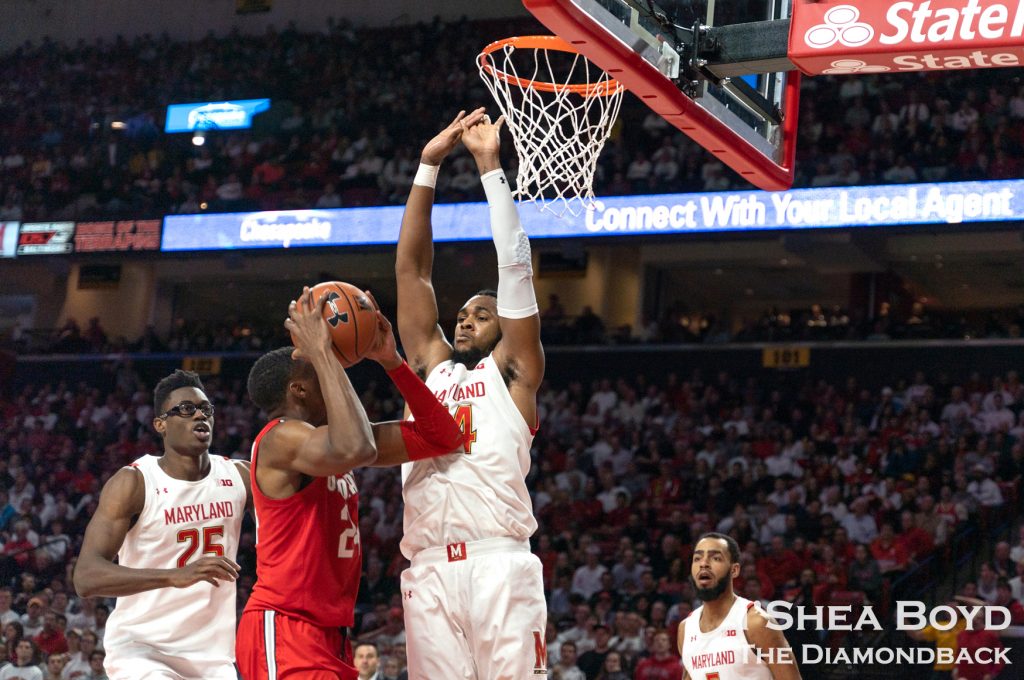 When Donta Scott received the ball near the free-throw line in the middle of Ohio State’s 2-3 zone midway through the second half Tuesday, he dribbled to his right, ran into a brick wall in the form of 6-foot-9, 270-pound Kaleb Wesson and bounced off.

Scott lofted the ball up as he fell to the floor, however, and it ricocheted up off the back iron and fell through the hoop. Mark Turgeon turned away from Scott — who was just getting back to his feet — and smiled. It hadn’t been what the coach expected, but the Maryland men’s basketball forward’s fall-away fling toward the basket worked.

In many ways, Scott’s presence for the Terps on Tuesday might not have been what the coach had expected at the start of the season, either. Back then, Turgeon had ample frontcourt depth and he didn’t know how Scott — a freshman — would perform in tight Big Ten contests.

But in the wake of Makhi and Makhel Mitchell’s departure, Scott has emerged as a vital piece in Maryland’s new frontcourt rotation. He played 33 minutes and scored seven points while adding five rebounds in a 67-55 win over the Buckeyes. And even as the 6-foot-7 Scott battles against bigger players at the four, his tenacity and maturity show through, producing impressive performances early in conference play at a position his team needed someone to step up.

“Donta’s just like a pit bull,” guard Darryl Morsell said. “If I go in a back alley, I want Donta with me, because I know he’s going to fight for me, he’s going to give it his all. So, he carries that same demeanor and mindset on the court. He just plays to win.”

When Scott’s teammates are asked about what Scott brings, they tend to be at a momentary loss. There’s the go-to response, pointing to the 225-pound Philadelphia native’s toughness as his calling card.

But there’s more to him than that. Once his fellow Terps make up their minds, though, the praise often flows out all at once.

“I don’t even know how to explain Donta,” Morsell said, before comparing Scott to a pit bull.

Before the freshman found a more permanent spot in the starting lineup — beginning against Seton Hall four games earlier — Scott played 20 or more minutes twice in his first 11 college games. He’s found his way on the floor more frequently lately, however, and as the Big Ten slate resumed Saturday against Indiana, Scott’s displayed a poise for the moment.

In a comfortable win over the Hoosiers, Scott scored nine points. And on Tuesday night, he featured for a season-high 33 minutes, impressing Turgeon with his defense so much so that the coach was reluctant to sub him out.

Turgeon also trusted Scott in the middle of his offense when the Buckeyes pulled out the 2-3 zone late in the second half. Along with his heave toward the rim as he fell back — which Turgeon pointed out likely could have been called a foul — Scott displayed his do-it-all ability in Maryland’s first ranked matchup this season.

Finding space in the center of Ohio State’s zone, Scott provided a feed to Smith at the low post to set up his frontcourt mate’s dunk. It was that play that led Morsell to call him a smart player after the game — not just a brawny one.

So after his 33-minute, seven-point performance that included battling against larger foes and holding his own, there were plenty of descriptors for Scott. He’s physical and strong, yet he’s smart and eager to please.

The overwhelming verdict, however?

And Scott has proven so.