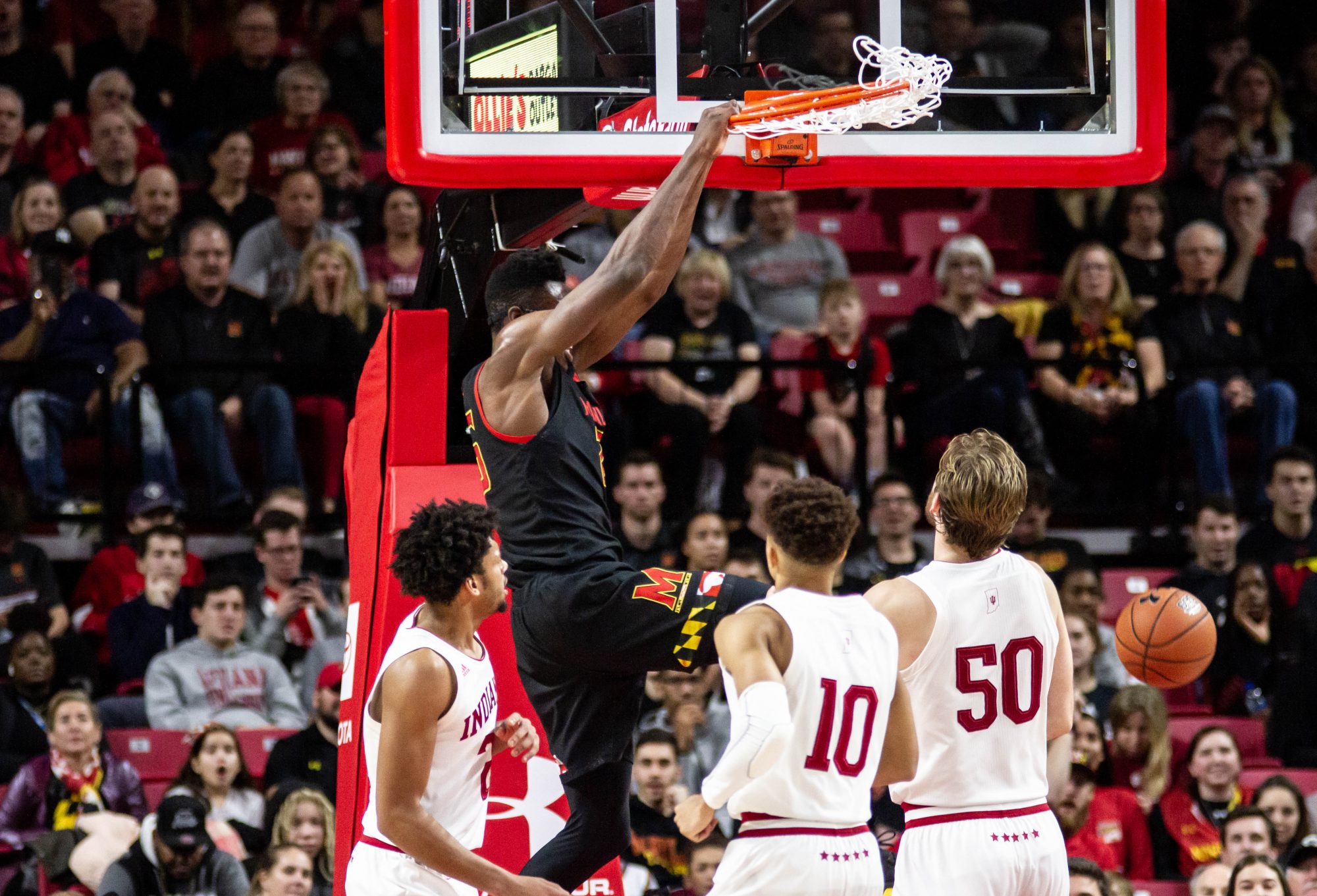 Forward Jalen Smith hangs on the rim after flushing a dunk during Maryland men's basketball's 75-59 win over Indiana on Jan. 4, 2020 at Xfinity Center. (Julia Nikhinson/The Diamondback)

Jalen Smith had done a bit of everything to that point Saturday — he had stepped out and sank from deep, he had battled down low for rebounds and he had put away tip-ins and lay-ins.

But he hadn’t dunked, not yet. So when guard Anthony Cowan’s outlet pass found Smith with about four minutes remaining in Maryland men’s basketball’s 75-59 win over Indiana, the forward turned toward the basket, ducked underneath the backboard, came out the other side and threw down the ball with as much energy as he could muster.

It was Smith’s final contribution in Saturday’s blowout, and it capped another standout performance from a player who needs to be just that to keep his Terps squad afloat most games. With 19 points — matching his season-high — and eight rebounds, Smith carried a frontcourt that’s still adjusting to life without forwards Makhi and Makhel Mitchell, who recently departed the program.

His display — and the dunk that concluded it — showed that Maryland can lean on the sophomore in Big Ten contests. It also showed that Smith, who struggled with inconsistency in his rookie campaign, can handle the load.

“For him to be comfortable out there, grabbing rebounds, playing tough, it’s a really big thing,” guard Aaron Wiggins said. “He’s setting the example for the guys who are coming in to back him up.”

So far this season, the 6-foot-10 forward is averaging just under a double-double per game — 13.5 points and 9.9 boards. And in 25 minutes during Saturday’s contest, he flashed that well-rounded ability.

Smith’s back-to-back 3-pointers provided a spark on offense, triggering an 11-0 run. He stuffed forward Trayce Jackson-Davis in the low post during the second half, and he corralled three offensive boards — including one between two Hoosiers defenders, finishing it off through contact.

He’s wanted to grow across the board, adding physicality and a better jump shot to his game. Smith said coach Mark Turgeon doesn’t let him leave the gym after practice unless he hits 50 triples. His coach tells Smith to exhibit his improved strength on the court, be it fighting for rebounds or slamming a jam.

[Read more: “A whole new animal”: A tough Big Ten slate is the next test for Maryland men’s basketball]

Perhaps it’s that toughness that’s the biggest difference from Smith’s freshman and sophomore years. Last season, with forward Bruno Fernando as a frontcourt partner, Smith fluctuated from dominant to docile. He still averaged 11.7 points and 6.8 rebounds, but there were moments — particularly against conference opposition — in which Smith was pushed around.

That hasn’t been the case this year, not after Smith added muscle during the offseason. He’s scored in double figures in 12 of Maryland’s 14 games. And even as Turgeon still tinkers with his preferred frontcourt rotation following the Mitchells’ departure, Smith has carried his fair share — and then some.

“He’s very, very gifted. He runs well,” Indiana forward Joey Brunk said. “He made those two threes in the first half against us, he’s great from the free-throw line, he’s a great player.”

As the second half progressed Saturday, the Terps stopped settling for threes — they shot 25 percent from long range — and worked the ball inside.

That’s where Smith shined, converting all three of his shot attempts in the final 20 minutes while making five of his seven free throws. After Smith pulled in just two boards in the first half, Turgeon told him he needed to be more of an inside presence. So he corralled six loose balls in the second half. Wiggins said he and his teammates made a point to feed Smith, rewarding the forward for his all-around effort.

And after all the lay-ins and box-outs that helped Maryland build a 30-point advantage at one point, Smith took a moment to reward himself, rising up and hanging on the rim long after the ball passed through it at the end of his 19-point performance.