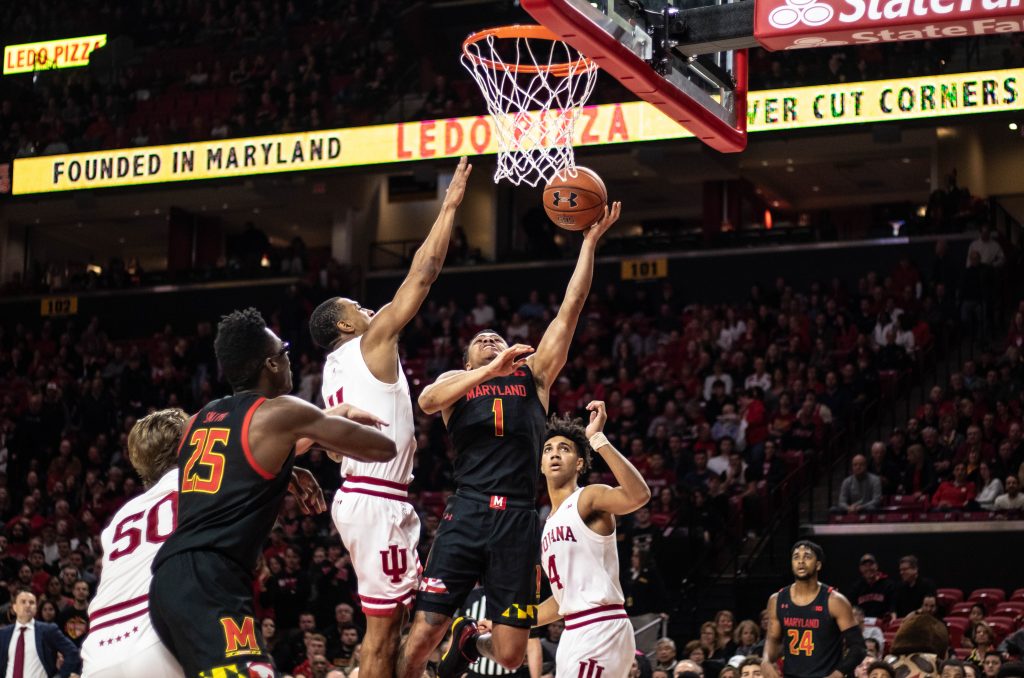 As No. 15 Maryland men’s basketball prepared to resume Big Ten play Saturday against Indiana — a short two-game set in December briefly interrupted the nonconference schedule — forward Jalen Smith preached toughness as a driving force to success in the conference.

Guard Eric Ayala echoed that sentiment, stating the importance of battling during the back-and-forth league games. Against the Hoosiers, the Terps flashed the grit and resilience to navigate through precarious situations.

And with five minutes to play and the Terps firmly in control, guard Anthony Cowan finished a layup while drawing a foul, prompting the senior to flex his muscles to the crowd and shimmy his shoulders. Cowan’s shoulder shake captured the swagger the team developed from fighting its way through difficult stretches before blowing Indiana out, 75-59.

“Just the confidence around the board,” Cowan said. “A lot of people stepped up and played well, which we needed them to do. And I think we kind of finished the game how [we’re] supposed to.”

[Read more: “A whole new animal”: A tough Big Ten slate is the next test for Maryland men’s basketball]

When forward Jalen Smith set a screen and drifted away from the ball handler, Maryland (12-2, 2-1 Big Ten) had made just one of its last 10 shots and were in desperate need of points, trailing 13-8. Despite shooting just 28 percent from three on the season, Smith caught Cowan’s pass and confidently stepped into a perimeter shot.

On the following possession, Smith slipped a screen and ran to the open corner for a second consecutive 3-pointer. “He’s just tough — tough mentally,” guard Darryl Morsell said of Smith. “His shot hasn’t been falling. [But] today, come out confident, hit two big threes to open up the game.”

Smith, an unlikely provider of perimeter marksmanship, injected energy back into what was an uneasy Xfinity Center crowd. The two makes also led to heightened intensity on the defensive end.

“[Jalen] hit the back-to-back threes, which got him going and kind of loosened up the [Hoosier] defense a little bit,” coach Mark Turgeon said. “That helped us. And I thought we locked in and guarded.”

The Terps parlayed the defensive pressure into success on the offensive end, methodically piecing together an 11-0 run over four minutes to claim a 22-16 lead. Maryland extended its edge to 28-20 going into the halftime break.

Indiana (11-3, 1-2 Big Ten) showed its own toughness, answering back early in the second half, using a pair of second-chance buckets and a layup to cut the Terps’ lead to 36-33.

Saturday’s game offered the first Big Ten test for Turgeon without the services of forwards Makhel and Makhi Mitchell, who left the team in late December. As the ninth-year coach fiddled with the frontcourt rotation, the Hoosiers grabbed 15 offensive rebounds, which led to 13 second-chance points, and scored 22 points in the paint.

Maryland unearthed its resilience once more after the Hoosiers cut the deficit to three, answering back with eight consecutive points to build its lead back up. Then, the confidence began to snowball.

Turgeon’s team forced turnovers to get out and transition, allowing the Terps to generate 25 points off of 14 Indiana miscues. Donta Scott finished an emphatic slam and Jalen Smith — who finished with a game-high 19 points — threw down a dunk in transition.

Cowan, who had 13 points, six rebounds and six assists without a turnover, nailed a step-back 3-pointer and finished the and-one layup that led to his flex.

After displaying its grit, Maryland showed just how prolific it can be when its confidence peaks.

In a one-sided final 14 minutes, the Terps’ lead grew from three to 30. The lead dwindled once the reserves entered the game, but Maryland still outscored the Hoosiers 39-26 over the last 14 minutes.

Maryland knew it needed to be tough — not just within the framework of the game, but also within the context of its entire season. After two straight losses in December put a damper on a promising 10-0 start, the Terps responded with a convincing conference victory.

“There’s been a lot on our plate. We were ranked really high — I’m not sure we were ready for it, I’m not sure we deserved it. I don’t think we were having any fun,” Turgeon said. “Today, the guys had fun. You saw guys smiling [and] you saw guys playing more relaxed as the game went on.”