The best of Maryland athletics in the 2010s 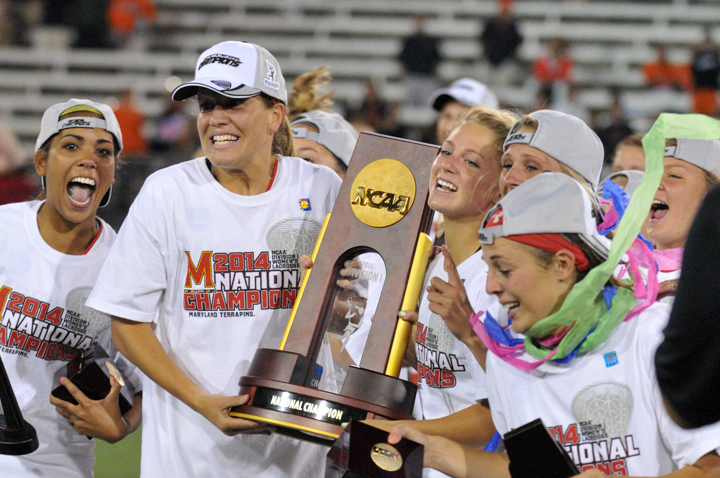 Midfielder Beth Glaros holds the trophy with her teammates after the Terps defeated Syracuse 15-12 to capture the 2014 NCAA Division national championship on May 25, 2014 at Johnny Unitas Field.

By Alex Murphy and Nick Albicocco

Today is the last day of the 2010s. The decade has come to an end, and there’s been a lot that has happened over the past 10 years, especially in Maryland athletics. The Terps changed conferences, saw dominant programs rise and won many national championships.

There are not many more dominant programs in collegiate athletics than Maryland women’s lacrosse. After their 2019 championship, the Terps now have 15 national titles, 14 of which have come in the NCAA Tournament era. In the 2010s, Maryland won five titles, were the runner-up three times and reached the Final Four every season. Across the decade, the Terps lost just 15 games, winning less than 20 games once, and losing just one game seven of the 10 seasons. The national championship teams from 2010, 2014, 2015, 2017 and 2019 had a combined 111-4 record. Maryland either won the conference regular-season title or conference tournament title in every season and were the No. 1 overall seed in the NCAA Tournament nine of these 10 seasons. Eight of the last 10 women’s Tewaaraton Award recipients, the best player in college lacrosse, were Terps. Maryland has had 26 All-Americans in the past decade and numerous Players of the Year, just to name a few more accolades. The cherry on top was the 2017 team, who finished a perfect 23-0 en route to a national title.

It’s safe to say Maryland women’s basketball has been one of the best programs in the country since the 2000s began. The Terps’ impressive start to the new millennium was heightened in 2014 and 2015 when they reached back-to-back Final Fours. The Terps have had their fair share of WNBA talent come through, including Brionna Jones and Shatori Walker-Kimbrough, the leaders of these teams. The more dominant season was the 2014-15 team, who went 34-3 and a perfect 18-0 in conference play. In the Final Four, the Terps’ runs ended at the hands of Notre Dame and UConn, but it capped off a 10-year stretch where Maryland reached the Elite Eight three times, Final Four twice and won a national title. While the program has reached once Sweet Sixteen since then, the Terps have been nothing short of dominant under Brenda Frese, who has won over 75 percent of her games coached since coming to College Park in 2002.

The passing of Jordan McNair in 2018 put Maryland football in the national spotlight for all of the wrong reasons. In its first game after his passing, Maryland faced the No. 23 Texas Longhorns at FedEx Field. The Terps entered the matchup as the underdogs despite defeating then-ranked Texas in Austin the previous year. On the first play from scrimmage, Maryland sent out ten players and left a gap between the center and right tackle, without a right guard on the offensive line in honor of McNair. Maryland would ultimately defeat Texas that day and the Terps continued to carry McNair’s jersey to each remaining game.

With Maryland leaving the ACC for the Big Ten in 2014, many of the rivalries that the Terps had developed over the years would come to an end. On February 16, 2013, the No. 2 Duke Blue Devils made its final visit to College Park to take on an unranked Maryland squad led by future NBA top-five pick Alex Len. The highly ranked Blue Devils were loaded with college stars in Quinn Cook, Seth Curry and Mason Plumlee and many experts said the Terps didn’t have a shot to beat their hated rival. Maryland took a one-point lead into halftime and the game remained neck-and-neck throughout the second half. After Duke guard (and future Terp)  Rasheed Sulaimon tied the game with 16.7 seconds left, Maryland’s Seth Allen drove to the basket and was fouled by Curry with 2.8 seconds left. Allen knocked down both free throws to secure an 83-81 win and as soon as the buzzer sounded, Maryland students rushed the floor and Baltimore Avenue served as the site of a chaotic postgame celebration.

The lacrosse capital of the world continues its dominance, starting out with recent Premier Lacrosse League champion Matt Rambo. He holds several men’s lacrosse records to this day, including most points, 257, and goals, 155, in a career. He also holds the records for career points in the NCAA Tournament, 62, points in a single NCAA Tournament, 23, and points in a single NCAA Tournament game, 6. Rambo was one of the main reasons why the Terps broke their 40+ year national title drought in 2017, winning the Tewaaraton Award that season as the best player in college men’s lacrosse. He was a two-time All-American, two-time All-Big Ten First Team, the 2017 Big Ten Offensive Player of the Year, and helped guide the program to four-straight Final Fours and three straight national title games.

Taylor Cummings, far and away, is the best collegiate women’s lacrosse player ever. Cummings won two national titles in her time at Maryland, but that’s just the tip of the iceberg. She is a three-time Tewaaraton Award winner, the first and only college lacrosse player to win it three times. As a midfielder, Cummings ranks third in program history in goals, 229, and second in total points, 323, numbers that are unheard of from anyone but attackers. She’s a three-time Honda Award recipient, given to the best female collegiate player in each sport. Cummings is also a four-time IWLCA First Team All-American, a three-time IWLCA National Midfielder of the Year, the two-time Big Ten Midfielder of the Year, a member of the U.S. Women’s Lacrosse National Team, the 2014-15 Big Ten Female Athlete of the Year, a four-time All-Conference selection (both ACC & Big Ten) and a two-time ESPY nominee for Best Female College Athlete.

It’s tough to make an argument for any other coach besides Cathy Reese. On top of the five national titles won by the team, Reese was the ACC or Big Ten Coach of the Year nine out of the 10 years in this decade, excluding 2015. She broke Cindy Timchal’s wins record in 2019, now boasting a 270-22 record in her 13 years in College Park. Timchal might have three more national titles, but Reese’s .925 winning percentage at Maryland is among the best, along with being in the top-5 for all-time Division I winning percentage, having won nearly 86 percent of the time. Reese just recorded her 300th career win as a coach during the Final Four in 2019 and in this decade, she’s a four-time IWLCA National Coach of the Year recipient.