D.J. Moore and Stefon Diggs are having historic seasons for former Terps in the NFL 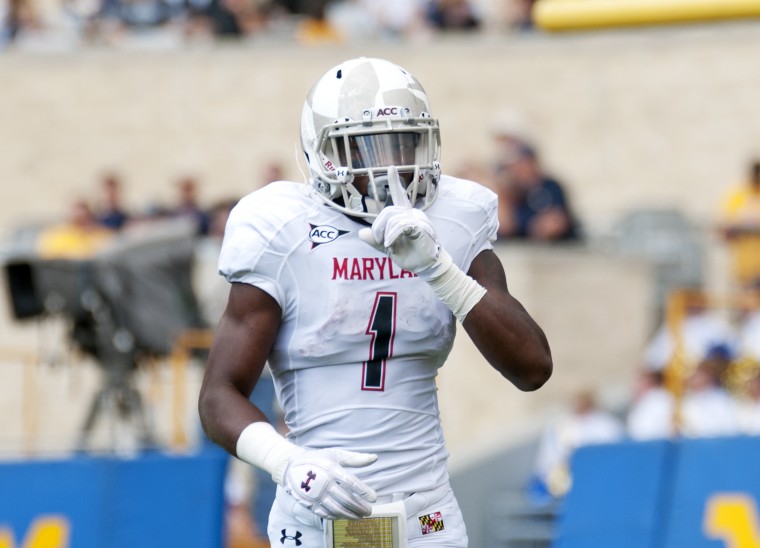 Wide receiver Stefon Diggs after scoring his first touchdown in the first quarter of the Terps' 31-21 loss at West Virginia on Sept. 22, 2012.

With one week left in the 2019 NFL season, it’s safe to say that Maryland alumni have left their mark on the league this season more than others.

However, two former Terps have stood above the rest. Through the first 16 weeks of the season, there are two Maryland alumni in the top 10 for receiving yards: D.J. Moore and Stefon Diggs.

Both have posted career highs in single-season receiving yards, but they’ve also re-written the record books for Terps now in the NFL.

They also now have the two best receiving seasons of any former Terp, beating Torrey Smith’s previous high of 1,128 receiving yards in 2013.

Smith finished 17th in the league in that category, but Moore and Diggs have the ability to do something no Terp has done in nearly 55 years: finish in the top 10 in receiving. If it happens, it would be the first time ever that two Maryland alumni finish in the top 10.

The only Terp to have done this was former Cleveland Browns wide receiver/punter Gary Collins, having done it in 1965 and 1966.

Those two seasons were the best of Collins’ career and were among the best seasons in that time period. He not only finished in the top 10 in receiving yards but also receiving touchdowns, receiving yards per game, receptions and approximate value.

He ended up making the Pro Football Hall of Fame’s All-1960s Team, primarily for these two seasons, but his punting might have been more impressive, specifically talking about his 1965 campaign.

In 1965, he had 65 punts for 3,035 total yards, with a long of 71 yards and an average of 46.7 yards per punt. Collins led the league in yards per punt, was third in longest punt and fourth in punts and punting yards.