Maryland wrestling showed signs of progress in loss to No. 10 Pittsburgh 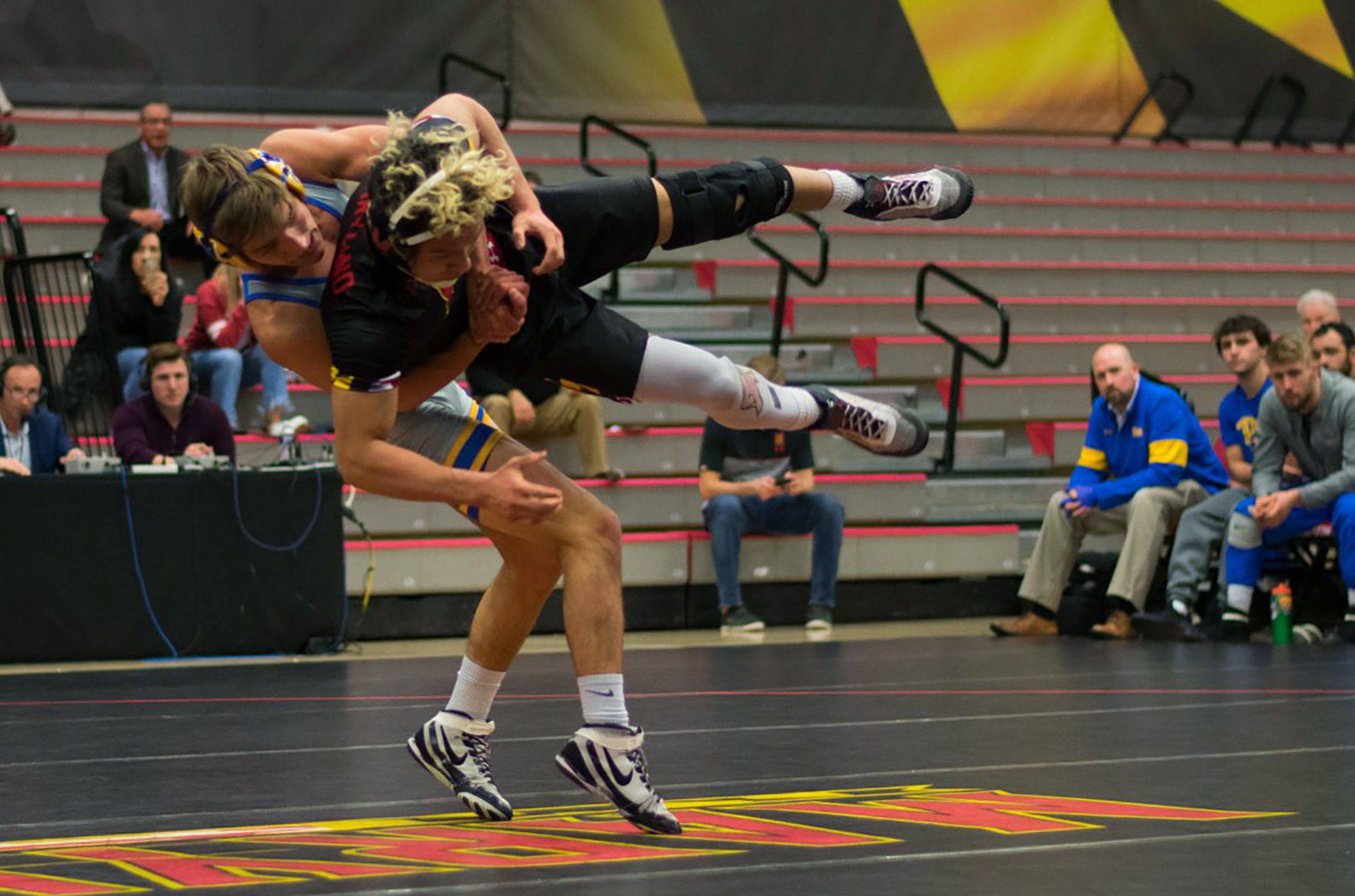 For a brief moment, Maryland wrestling’s King Sandoval had the attention of college wrestling fans against No. 10 Pittsburgh on Friday.

The 133-pounder faced off against No. 5 Micky Phillippi, who entered the bout with a perfect 9-0 record. But, within 30 seconds of the first period, Sandoval — the clear underdog — nearly blemished Phillippi’s pristine start to the season.

He attacked, taking control of Phillippi’s right arm from the neutral position, eventually flipping him over for a fall count. Sandoval couldn’t hold it, but he was awarded two points for the takedown and four near-fall points to go up 6-0 in the bout. Phillippi worked his way back, though, eventually securing an 8-6 decision.

But Friday’s performance was still uncharacteristic for the Terps. Despite a 27-10 loss to the Panthers, three Maryland wrestlers were within a takedown or striking distance to win their bouts, including Sandoval — a promising effort against the No. 10 team in the country that has the program trending in the right direction.

“I don’t believe in moral victories,” coach Alex Clemsen said. “Losing sucks. I frickin’ hate it. With that said, the only way we’re going to win, in this sport, is to fight tremendously hard and up and down our lineup, all 10 kids had good fights and put themselves in the match.”

Among the other close bouts, 141-pounder Hunter Baxter was 30 seconds away from an upset over 141-pounder No. 19 Cole Matthews, but he was pinned with seven seconds left in the third period.

Maryland suffered its own upset defeat in the 174-pound matchup as No. 20 Philip Spadafora, seconds away from clinching the Terps’ third win of the night, was taken down, losing 5-4 at the buzzer to Gregg Harvey.

However, 157-pounder Jahi Jones had already done the same to Pittsburgh, knocking off No. 11 Taleb Rahmani in a low-scoring 3-2 decision after fighting off a last-second takedown attempt in the third period.

“I think that just comes with grit,” Jones said. “I’ve been in that position in practice a thousand times, so I wasn’t the slightest bit worried that I was gonna give up a takedown.”

The redshirt senior has had a front-row seat to Maryland’s struggles since joining the Big Ten, as the Terps have gone 15-57 during his tenure, with just one conference dual win.

Despite the lack of success the team has had in recent years, Jones saw Friday’s match as a step forward.

“We’re going in the right direction,” Jones said. “You can’t just turn that around overnight.”

There has been a noticeable shift within the program, and much of that has stemmed from this offseason’s coaching shuffle. While former coach Kerry McCoy led the Terps to frequent success in the ACC, he was unable to do so in the Big Ten. There’s hope that Clemsen will be the one to reverse that trend.

“With any type of change, even if it’s symbolic, there’s a shift in mentality,” 197-pounder Jaron Smith said. “There’s a little bit of relief that like, I need to reevaluate my dedication to this sport and take a deep look at what’s going on around you. I feel like that happened with our program.”

Five seasons at the bottom of the Big Ten can make a big difference, but in his first year, Clemsen has thrown all his chips in to change the stigma around his program. Friday was the first evidence of the team’s fortune flipping.