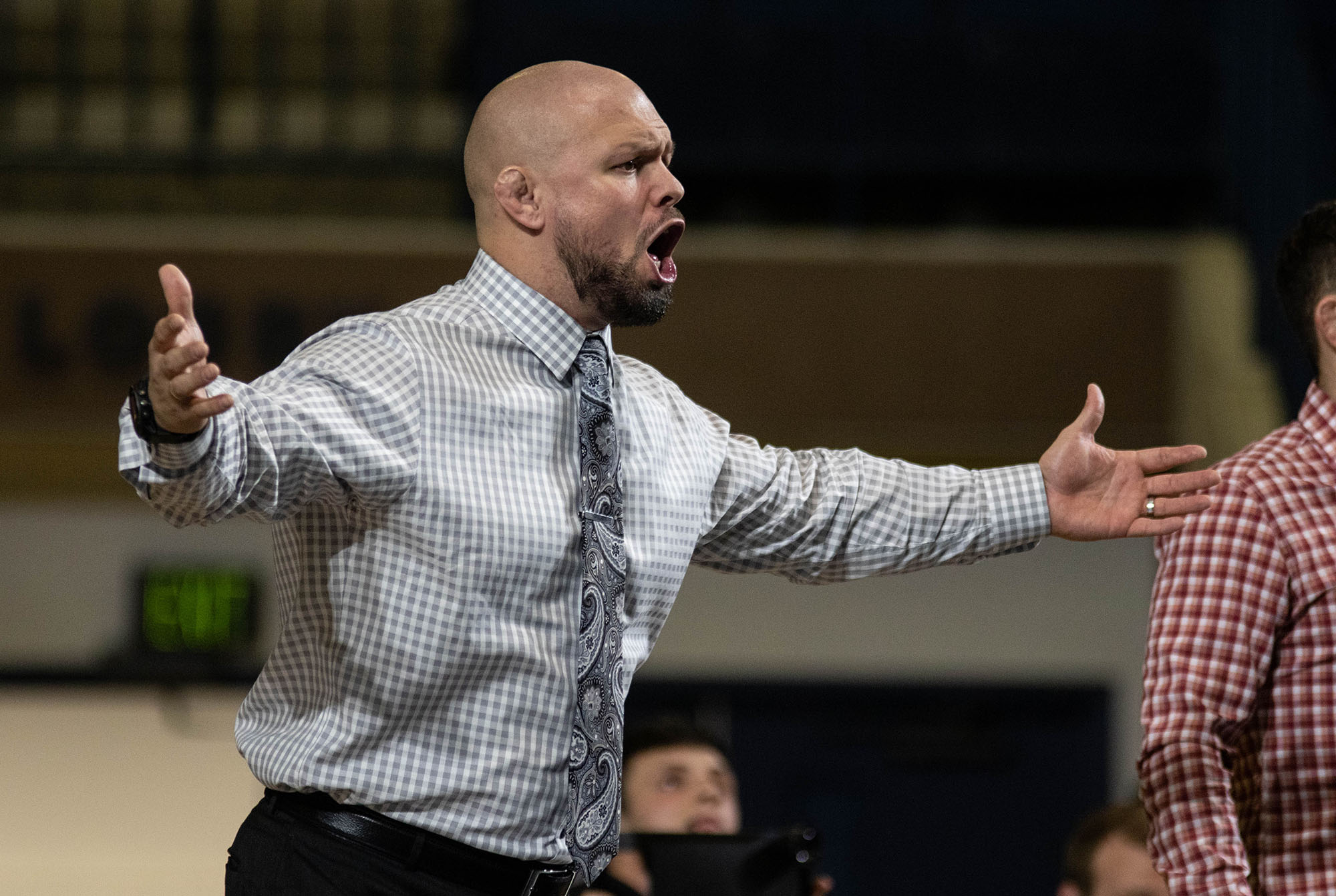 Maryland wrestling heavyweight Parker Robinson walked off the mat in disappointment, losing to Rutgers’ Christian Colucci in the final bout of a 28-11 Scarlet Knight victory on Dec. 7.

With the defeat, the Terps’ Big Ten record worsened to 1-45 since joining the conference in 2014, continuing a trend that has pushed the team to five straight below-.500 seasons.

However, almost two months into his first season as Maryland’s head coach, Alex Clemsen is trying to change that narrative, looking to flip Maryland from a conference bottom-feeder to a competitor. And while the results haven’t been immediate — with the team currently holding a 1-3 record — Clemsen knows it will take time to right the ship as he sets his plan in motion.

“Every place has its intricacies and its nuances, and you gotta learn how to navigate those,” Clemsen said.

Clemsen became the program’s seventh head coach in April, taking over for Kerry McCoy, whose 11-year tenure with the Terps ended in March.

It’s been a full transition for both Clemsen and the program, with Maryland’s wrestlers having to adapt just as their new coach has. But the similarities between Clemsen and McCoy have been evident.

“I love them both,” 141-pounder Hunter Baxter said. “I chose to come here because Kerry was not only a great coach, but a great person, and I see the same in Coach Clemsen. They both value us a ton. They love us not only as the team they coach, but as a family.”

The challenges of being a new coach, as Clemsen described, are like solving a Rubik’s cube, where it might look complete, but one side is a little off. However, he, like the team, is embracing change.

Still, it’s taken time for the team to jell under a new coaching staff, leading to similar inconsistencies that have plagued the Terps in the past. But once the preseason began in the fall, an understanding from player to coach slowly formed.

“They quickly rose to the occasion,” Clemsen said. “These kids are hungry for more, for better, for change — and they’re making the most of it.”

Among the differences with Clemsen at the helm, practices are now shorter and more intense. Clemsen asked more of his team in a shorter time frame, consistent with his energy as a coach.

“I’m an open book,” Clemsen said. “People tell me that I can be brutally honest and what you see is what you get. From day one, that’s what [the wrestlers] got from me. and I’m consistent with that.”

On the mat, his intensity has gotten him into confrontations with referees, even costing Maryland team points due to unsportsmanlike conduct calls. On Dec. 6 at Navy, the Terps were docked in a 21-12 loss that was much closer than the scoreline indicated.

Clemsen argued with the referee during the 197-pound bout, one that Maryland’s Jaron Smith looked to have won via pin in the first period. It finished as a 12-10 decision for him over Jacob Koser, but a potential 15-13 match score turned into 15-12 as the Terps looked to Robinson for a major decision.

Robinson was pinned, ending the comeback bid. But as the program continues to find its footing while fighting for legitimacy and respect for “the ‘M’ on our chest,” Clemsen’s style has been a welcomed change.

“It’s nice to see him get fully involved in the match,” Baxter said. “I’ll take those team points every day.”