No. 10 Pittsburgh pulls out dual win over Maryland wrestling, 27-10 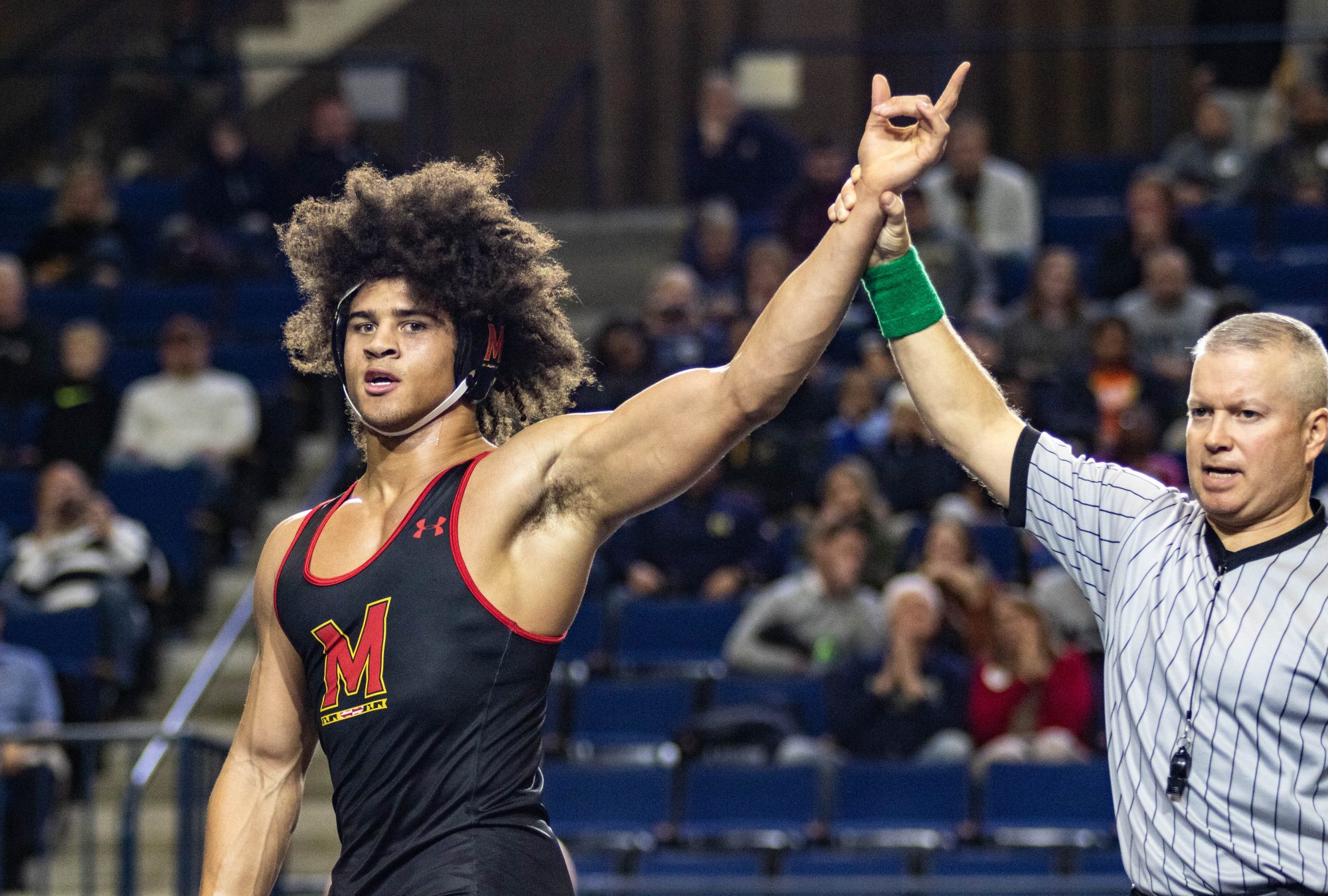 Maryland wrestling’s Hunter Baxter trailed 5-3 in the final minute of his 141-pound bout with Pittsburgh’s No. 19 Cole Matthews, needing a takedown to secure the upset win.

The redshirt sophomore lunged for Anthony’s legs and got the up position for long enough to secure the takedown, tying the bout at 5-5. And with another point already under his belt after securing at least a minute of riding time, all Baxter needed to do was ride out on top to close it out.

However, Anthony responded with a reversal and got Baxter on his back, securing the pin with just seven seconds left in the bout. Anthony’s effort ensured the Terps would be without early momentum, helping the No. 10 Panthers (5-1) — who won six of their first eight bouts — defeat Maryland (1-4, 0-1 Big Ten) in its home opener, 27-10.

“The energy and the effort was really good,” coach Alex Clemsen said. “Those guys did a good job at bringing energy and fighting hard.”

The Terps faced a tall task against a team with six ranked wrestlers, including three in the top-10. They continued their struggles early in meets, losing their first three bouts of the match.

The night began with 125-pounder Brandon Cray, who has struggled so far this season. His woes continued after falling behind 3-2 to Logan Newell with a minute left in the third frame of his match. Newell landed four points in the final minute off an escape, takedown and riding time to secure a 7-2 decision.

The first near-upset was 133-pounder King Sandoval, who almost pinned No. 5 Micky Phillippi in the first period, which would’ve been Phillippi’s first dual loss of the season.

Instead, Phillippi outlasted Sandoval’s hold and worked his way back from an early 6-0 hole, tying it at 6-6 entering the third period. A stalling call gave the redshirt sophomore a 7-6 lead, and another point for riding time put Pittsburgh up 6-0 in the match.

Baxter’s pin put Maryland in a 12-0 hole early, but the Terps got some big wins before intermission, starting with 149-pounder Michael Doetsch.

It was a scoreless bout until roughly 20 seconds left in the third period, when Doetsch pulled a reversal on Dallas Bulsak, winning in a 2-0 decision.

The Terps got their upset with 157-pounder Jahi Jones, who faced No. 12 Taleb Rahmani. Jones led just 3-1 into the third period, and after Rahmani cut the lead to one, Jones’ task was to hold off a last-ditch effort.

Rahmani went low, but Jones countered and held his neutral position as the buzzer sounded, taking a 3-2 decision to help Maryland cut its deficit to 12-6, bringing the Xfinity Center Pavilion crowd to a roar.

“The energy from our crowd was good all night,” Clemsen said. “It probably spiked there.”

The Terps’ energy waned in the second half of the dual, though. Kyle Cochran, who avoided a major decision loss until getting put on his back, lost an 11-0 major decision to No. 12 Jake Wentzel.

Then, Maryland’s only ranked wrestler, No. 20 Philip Spadafora, was upset in the closing seconds of his bout against Gregg Harvey. Spadafora led 4-3 with less than 30 seconds left in the bout, but Harvey was able to secure a reversal and two back points to shock the redshirt sophomore, 7-4, with time expiring.

Down 19-6 in the match, Maryland turned to its final three upperweights in the hopes of eking out a comeback.

Kyle Jasenski needed to upset No. 8 Nino Bonaccorsi in the 184-pound bout via a technical fall or pin, but he fell behind early, losing an 11-3 major decision and sealing the Terps’ fate.

The Panthers secured the match win with the major decision, but 197-pounder Jaron Smith continued his good run of form, winning a 9-0 major decision over Kellan Stout, who was called for stalling at four different times in the bout.

The match ended on a sour note as Parker Robinson dropped a 10-1 decision to No. 9 Demetrius Thomas, pushing Maryland to 1-4 on the season as even more daunting Big Ten schedule looms.

CORRECTION: Due to a reporting error, a previous version of this story misspelled Cole Matthews’ name. This story has been updated.