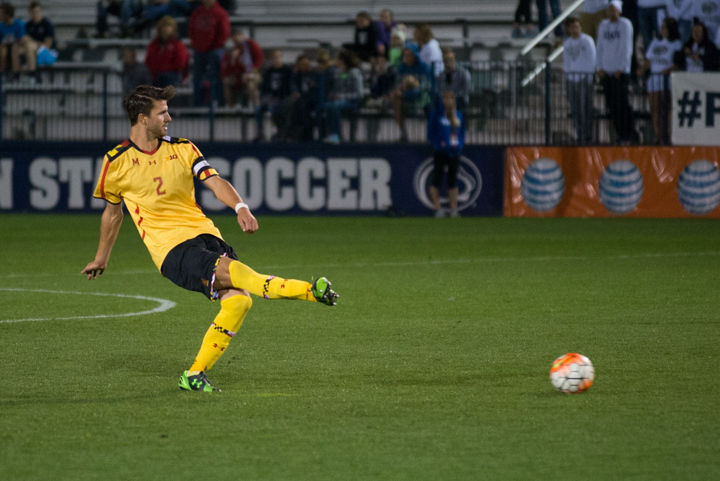 Defender Alex Crognale passes the ball during the Terps' 4-3 comeback win at Penn State at Jeffery Field on Oct. 9, 2015.

It’s been a whirlwind of a career for former Maryland men’s soccer centerback Alex Crognale.

The 2016 Big Ten Defensive Player of the Year has bounced around since Major League Soccer’s Columbus Crew SC signed him to a contract in December 2016.

Crognale was loaned out twice to the second-tier USL Championship, first to Orange County SC in 2018 and then Indy Eleven in 2019.

He returned to the Crew in both seasons, appearing in 34 games for Columbus while scoring one goal. His spot on the team has never been permanent and, on Monday, the USL Championship’s Birmingham Legion FC signed the Gahanna, Ohio, native.

After spending three seasons with his hometown club, Crognale left and thanked the team and fans.

Birmingham has no MLS affiliation, so Crognale will be spending some time in the Championship, a league he’s familiar with, for the next few seasons.

However, his playing time is bound to increase. Crognale is also the tallest person on the Legion’s backline at 6-foot-5, and he is one of two players with MLS experience, joining former Clemson standout Kyle Fisher.

Fisher is a former ACC Defensive Player of the Year who started 22 games for Birmingham in 2019. He also faced off against Crognale twice in college.

Crognale and Maryland won the first meeting, a 3-1 win at Clemson on Sept. 21, 2013, but Fisher and Clemson won the bigger meeting. In the quarterfinals of the 2015 NCAA Tournament, the Tigers knocked off the Terps in penalties on its way to a national championship appearance.

Now, the two are teammates instead of opponents, so look for that backline tandem to potentially break out during the 2020 USL Championship season.