“Not the end of the world”: Maryland men’s basketball prepared to rebound from first loss 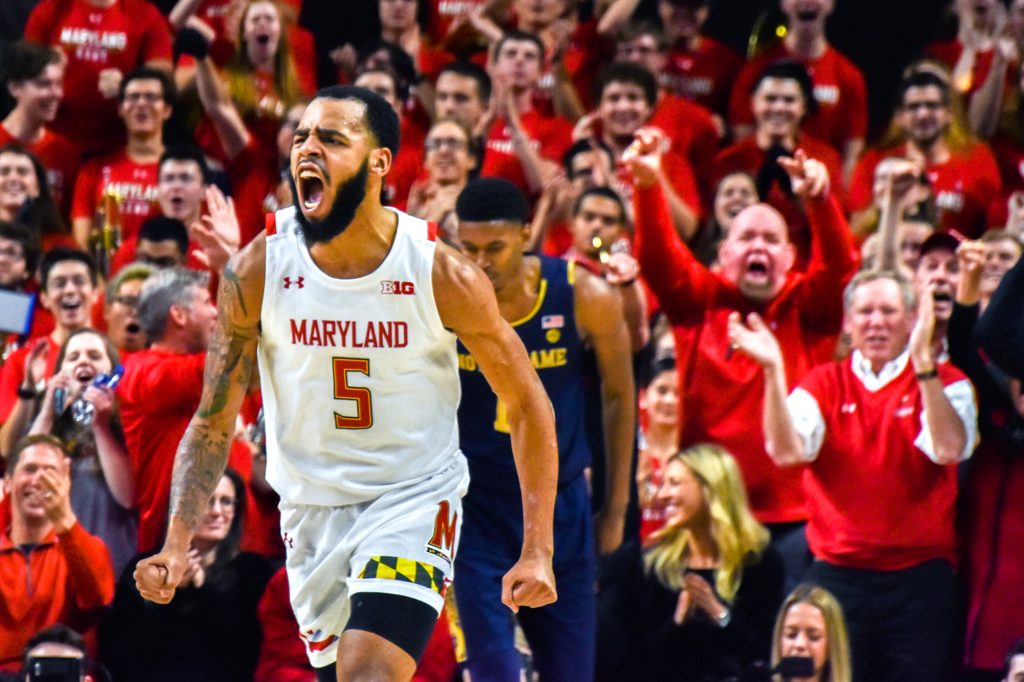 With a nine-day gap between a seven-point loss to Penn State and Thursday’s nonconference matchup with Seton Hall, Maryland men’s basketball had time to prepare for finals, refocus in practice and get peppered with questions by Mark Turgeon.

The coach took the opportunity to meet individually with his players during the break. The sessions served as a mid-season check-in, a way to get a sense of their mindsets after the Terps’ first loss of the year in their first true road game.

“How comfortable do you feel?” guard Aaron Wiggins recalled Turgeon asking. “What do you think about the team, where we’re at right now?”

To Wiggins and others, those questions had simple answers. At 10-1 and No. 7 in the country, one loss to a now-ranked Nittany Lions squad doesn’t spoil what has been an otherwise promising start, even if that loss featured 20 turnovers and 33 percent shooting.

It’s a wake-up call of sorts. And coupled with a week of practice and a renewed focus on the “little things,” Maryland feels that shaky performance can be a springboard into its final two nonconference tilts this season before Big Ten play tips off in earnest.

“Everybody feels really comfortable, confident about our team,” Wiggins said. “Coming off this loss, it can be an eye-opening thing for us. It can be one thing that either breaks a team down or makes a team better. So for us, I think everybody has a mindset that it can be good for us and that we can get a lot better.”

Turgeon gave his players Wednesday and Thursday off last week to prepare for exams following the Penn State loss. Since they’ve returned, the priority has been ensuring minute details aren’t overlooked.

That includes boxing out, communicating on defense and making strong cuts off screens on offense. It’s those areas that can help a team continue to find the win column even as its offense struggles at times to meet its own high standards.

“Hopefully we’ll be a little bit more efficient,” Turgeon said. “Did a lot of shooting [in practice]. Hopefully we’ll make a few more shots — we haven’t shot the ball well this year. Maybe that’s who we are, I don’t know. We’ll see. But I like to think that we’re going to be more consistent shooting the ball as we move forward.”

The Terps have converted from three-point range at a 30.8 percent rate this year compared to 34.9 percent in 2018-19. And their overall field goal shooting has dropped 2.3 percentage points between the two seasons. The loss in State College exhibited some of those difficulties, with extended scoring droughts and a reliance on their top-five players for points the primary culprits.

It’s still early days, though, and a matchup with the Pirates on Thursday could offer an immediate opportunity to rebound.

“That was one game; it’s not the end of the world,” guard Eric Ayala said. “It’s big for us to go out this game and just bounce back.”

But before Maryland heads to Newark, New Jersey, Ayala stressed the importance of not looking too far ahead. While the bulk of the campaign still looms, the focus on small details — the ones discussed in Turgeon’s individual meetings — will be the difference come March.

So instead, Ayala’s focus strayed only so far ahead as the ice bath he would have after finishing his media duties. There would be plenty of chances in the future to worry. Tuesday night wasn’t one.

“Just not trying to overwhelm myself,” Ayala said. “And I think my teammates take the same approach: just one practice, one day, one road victory, one all that at a time.”