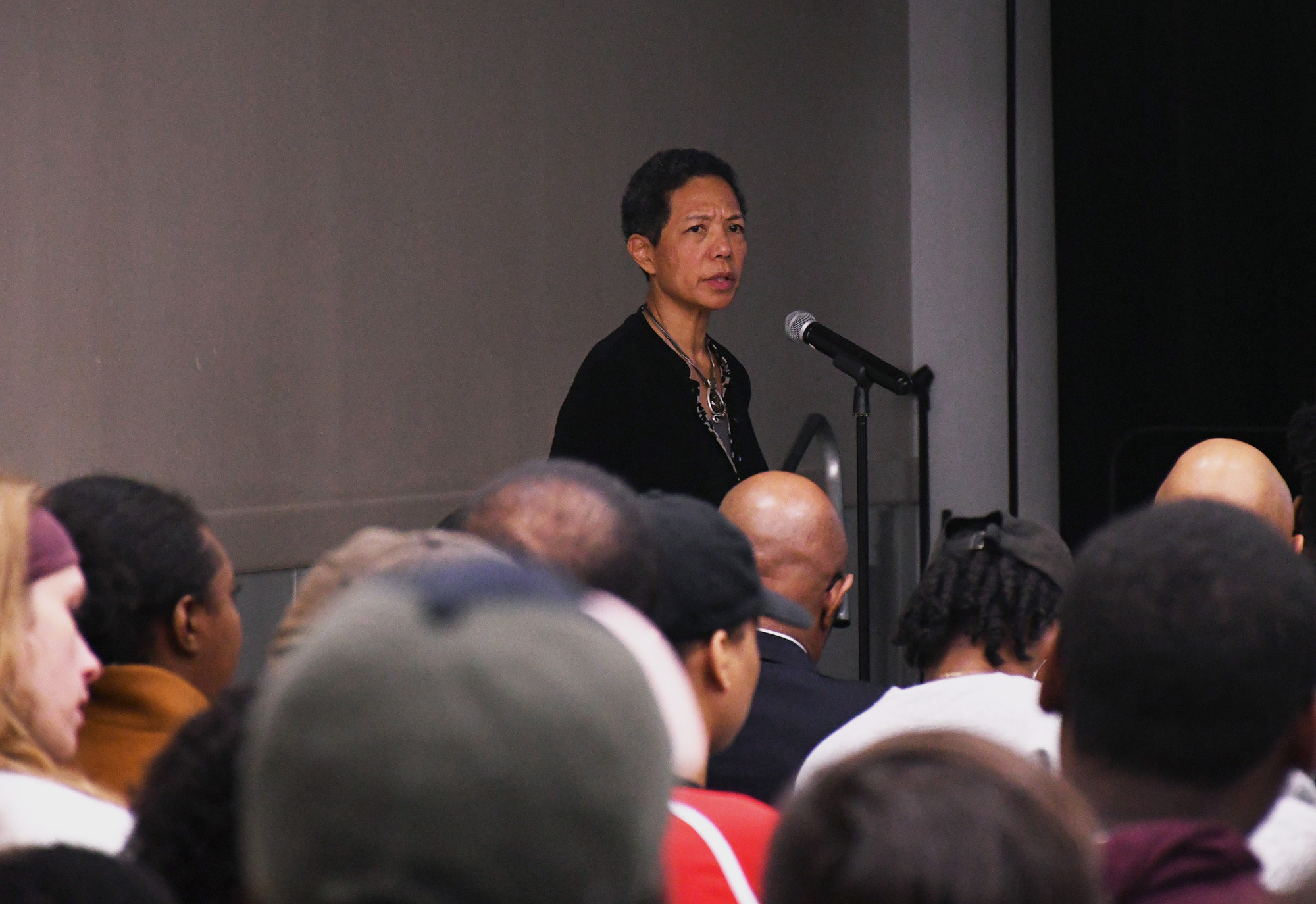 Georgina Dodge, the University of Maryland's VP of Diversity, speaks at a forum at Nyumburu Cultural Center on Dec. 9, 2019. Students at the forum expressed concerns about Dodge's potential changes for the center as well as her lack of engagement. (Molly Welby/For The Diamondback)

For the second time in four days, the University of Maryland’s diversity and inclusion vice president visited the Nyumburu Cultural Center, where she faced criticism from black students who once again expressed how they feel left in the dark by the school’s administration.

Students at the forum shared concerns about potential changes Georgina Dodge wanted to make to the center and what they saw as a lack of engagement so far in her leadership. Dodge, who’s been in her role since June, has said her relationship with Ronald Zeigler, the center’s director, is “contentious.”

One of the voices that filled the room was Niccara Campbell’s. She — and many others — spoke about the important role the center plays in the experience of minorities on this campus.

Some of the topics discussed Monday included Dodge’s decision to end an English class that the center offered, and potential updates to the center’s long-running Miss Unity Scholarship Pageant.

The English class — ENGL274: Creative Writing Through The Eyes of African Americans — was cut because of funding issues, Dodge said.

“What you’re saying is not totally accurate,” Zeigler interjected. “I asked you directly about our classes. In terms of the English course as mentioned, we’ve had an ongoing debate about that — that class has never been a problem with the [student fees committee] until your arrival on campus.”

“It is obvious to me that you and I need to sit down, and have a lot of conversations, because there appears to be a lot of misunderstanding,” Dodge responded.

The diversity and inclusion office will also be hiring a new assistant vice president, Dodge said, which would oversee offices such as Nyumburu and the university’s LGBT Equity Center, although she added administration was “still working on the job description.”

Dodge told attendees she convened a search committee to find this new vice president, with one student representative, a graduate student.

Tamya Anderson, a vice president for the Black Student Union, said at the forum that there should be an undergraduate student on the committee for it to be representative, as much of the student community at Nyumburu is made up of undergraduates.

Dodge said at the town hall she planned on giving $20,000 to Nyumburu from the ODI’s budget. Nyumburu would have discretion on how to spend this money, Dodge told The Diamondback. This would occur within the coming months.

She said her relationship with Zeigler was “in a good place,” and wanted to keep Nyumburu a center of black life on the campus. Over the weekend, rumors circulated on social media that Zeigler would be fired, or that the center would become a multicultural center.

“The vision really needs to be created by the people who utilize the space,” Dodge said. “It’s not a top-down type of vision, it’s a collective community vision that gets developed based on the needs that exist.”

Still, students weren’t convinced they could trust her.

“No offense, I don’t know you,” one student told Dodge. “But we know [Zeigler]. So when he’s going against you … and you’re talking in circles, it’s kind of hard for us to get behind you.”

Student speakers at the town hall also criticized Dodge for only attending one event at the center this semester.

“We just want to see her face more,” Monique Small, a student ambassador for Nyumburu, told The Diamondback. “We want to be present and considered in the visions she has for Nyumburu.”

Dodge said she would “love to be in Nyumburu all day,” but didn’t want to come off as micromanaging, she said, adding that she plans on coming to more events in the future.

On Friday, as students worried about circulating rumors, Dodge came to the center to answer their questions — displacing the weekly Jumu’ah prayers held by the Muslim Student Association in the center’s multipurpose room. For nearly 2 ½ hours, students assailed Dodge on her plans for the center.

While Monday’s event was only an hour long, the same themes were present.

Small asked what sort of access the Nyumburu community would have with her going forward.

“Us as the students, you work for us, and we want to have some sort of access to you. We want to know how we can voice our concerns to you,” the senior criminology and criminal justice major said.

“Invite me. I’ll come,” Dodge said, to jeers from the crowd.