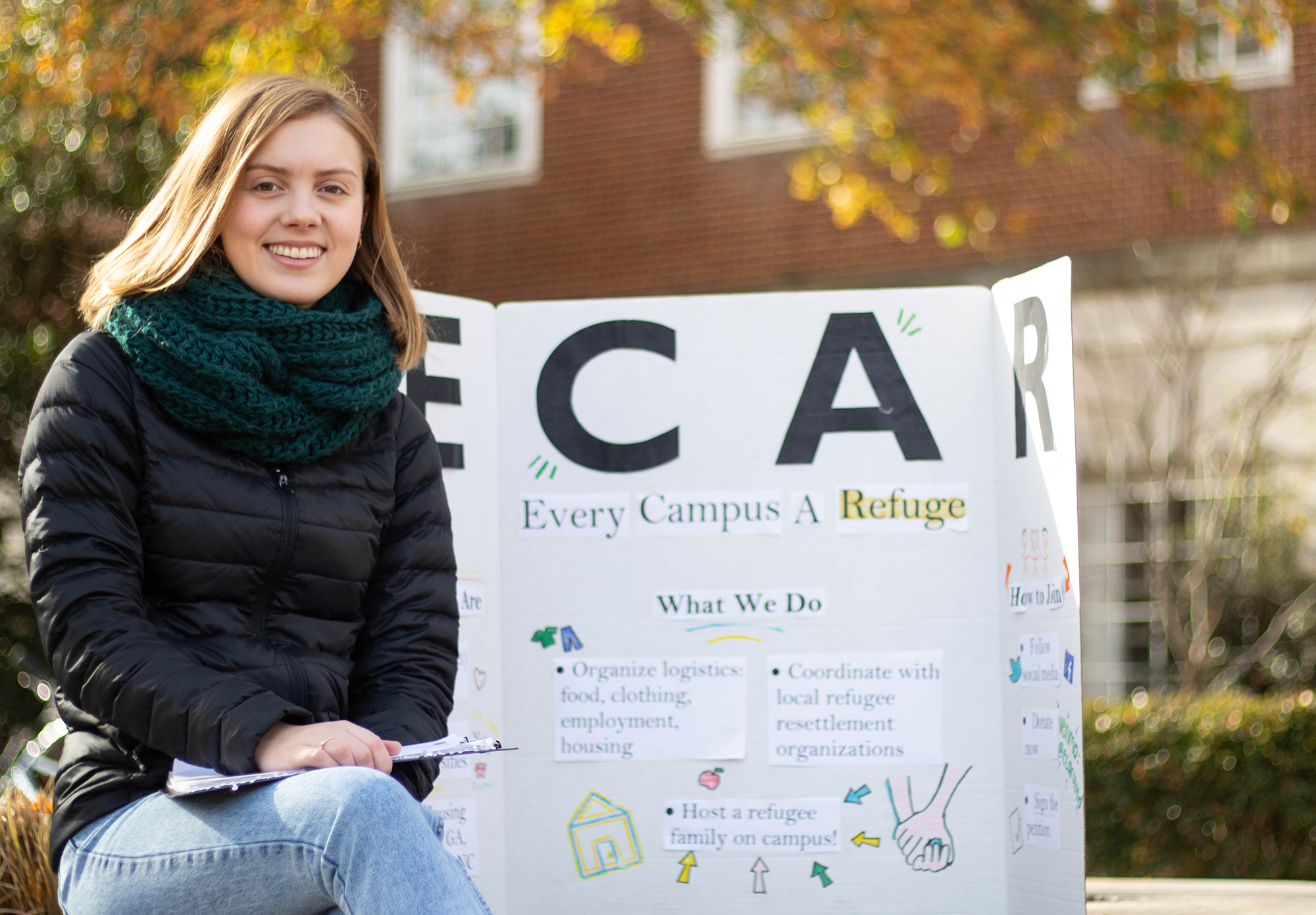 Katie Miller, the founder and president of University of Maryland's Every Campus a Refugee, sits with her canvassing materials outside of McKeldin Library on Dec. 8, 2019. (Julia Nikhinson/The Diamondback)

By Grace Mottley
For The Diamondback

Twice a week, senior cell biology and genetics major Alex Laurenson makes the trek to William W. Hall Academy in Capitol Heights, Maryland, to sit for two hours with one of his student mentees. Each visit, he works with them on their homework and checks in to see how they’re adjusting to their new school.

For these students, it’s not just a new grade that’s a big change, but a new home, a new language and a new country. As a refugee student, everything is suddenly harder; Laurenson hopes to build a relationship that makes adjusting to life in the United States a little easier.

Laurenson is part of Peer to Peer, a student group at the University of Maryland that works to advocate for and assist the refugee community in the areas surrounding College Park, including Riverdale Park and Capitol Heights.

“It’s important to have any sort of familiarity or consistency that will help them in the long run, which is what we do when we meet with them every week,” he said.

Peer to Peer and another student group, Every Campus a Refuge, will be able to continue their work following the Riverdale Park City Council’s Dec. 2 vote on permitting refugees to continue resettling within city limits.

Katie Miller, the founder and president of this university’s ECAR chapter, said the decision to continue to allow refugees is a sign that the community appreciates the work her organization does.
“It’s encouraging because it shows that locals actually care about what we’re doing and are ready to accept our mission,” the senior public policy and Spanish major said.

For Peer to Peer, a group that mentors refugee children at nearby public schools, the vote means it can continue its program and outreach. Students from this university go to schools such as William H. Horton Elementary and Parkdale High School during the week to assist students with their homework, mentor them and help them become more comfortable in the U.S.

“It’s fulfilling to see the kind of growth that builds when you’ve been bonding, doing things like negotiating ‘If you do this work now, we can have fun later,’ things like that,” Laurenson said.

Laurenson said he’s learned a lot from working with refugees, including holiday celebration, cultural norms and how his mentees interact with other kids; a lot of it, though, he doesn’t think he would’ve learned without real interactions.

“I would say it’s hard to have any sort of non-stereotypical exposure to cultures unless you have sit-down, face-to-face contact,” he said. “You can’t learn through the media.”

Every Campus a Refuge advocates resettling refugees on the campus. The national organization, founded in 2015, has chapters at campuses across the country where universities host refugee families in on-campus apartments, giving them access to resources such as education and employment assistance.

Miller and her group are working to get petition signatures from students and community members to present to university President Wallace Loh, requesting space for refugee families on the campus.

“If the community is supporting refugees, then it helps us find support to house them at UMD,” Miller said.

Decisions like the Riverdale Park vote — where over 20 refugee families are resettled per year — show the community is ready to support ECAR’s work, said Alan Thompson, the town’s mayor.

Thompson said refugees are already an important part of Riverdale Park and allowing them to continue resettling in the city will only improve the community.

“I believe that they are active and positive members of our community,” he said. “They only make our community better.”