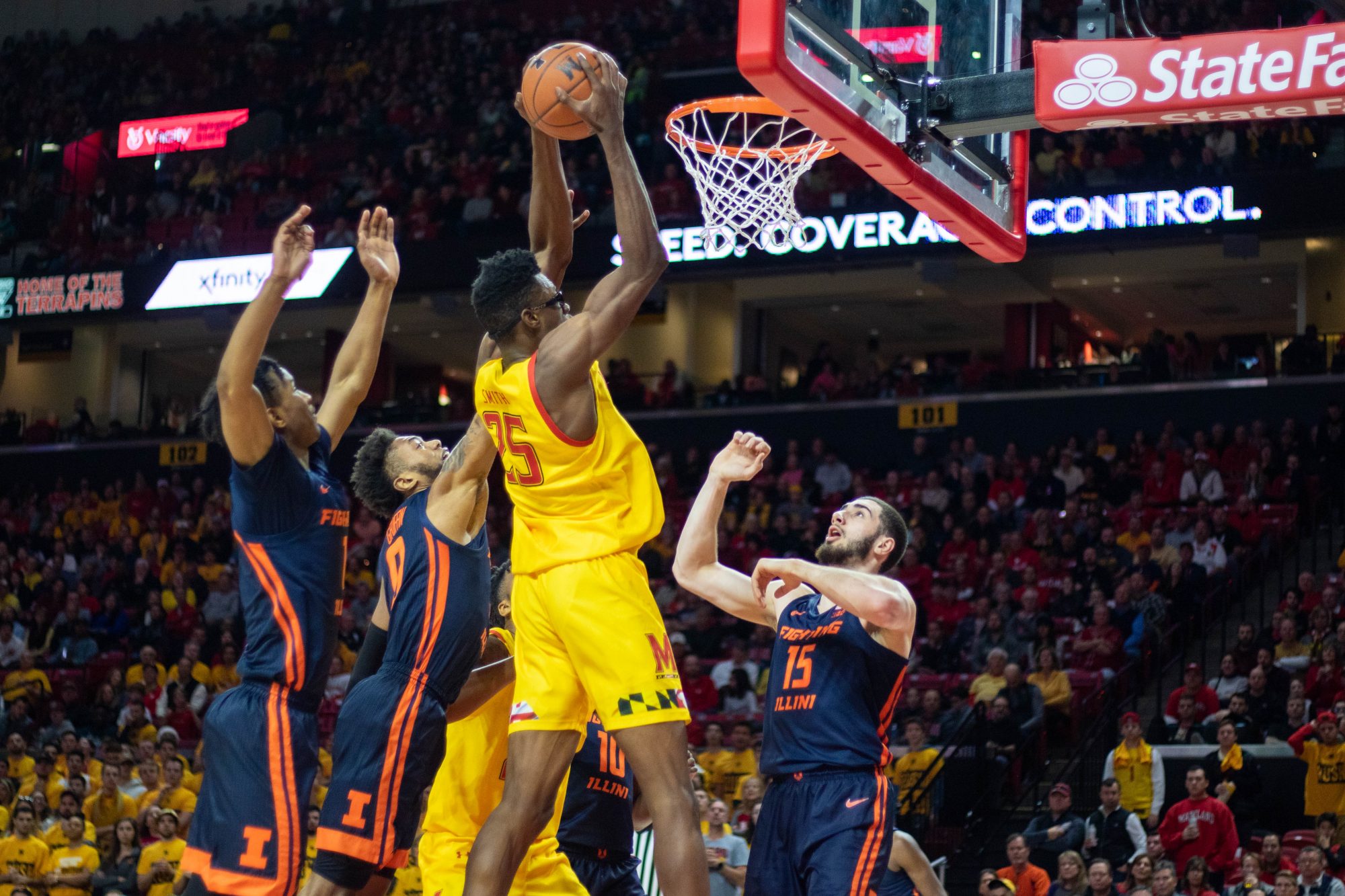 When Maryland men’s basketball’s offense found itself in a bind last season, one of the leading solutions was to throw the ball to Bruno Fernando and watch the 6-foot-10 forward impose his will around the basket.

The Terps’ offense ran through Fernando, relying on the big man to finish around the rim, draw fouls or command double teams to free up opportunities on the perimeter.

Now that Fernando is displaying his talents in the NBA, Maryland has relied more on the three-point shot. Through 10 games this season, the Terps have attempted 38 more 3-pointers than in the same span last campaign, prompting coach Mark Turgeon to address the need for improved post play.

“We’ve got to get a post-up game. We have no post-up. I mean, last year, we played through Bruno the whole game,” Turgeon said following Saturday’s narrow 59-58 victory over Illinois. “Now, it’s like jacking threes up the whole game. So we’ve got to figure out how to be a little bit better offensively.”

Through 10 games this season, Turgeon’s team has attempted 250 triples — tied for 47th most in the country — but is converting at just a 30.4 percent rate, good for 270th among 353 Division I programs.

As the outside shooting struggles persisted into the Big Ten opener — the Terps shot 8-for-31 against the Fighting Illini — the team knows an inside presence can help offset the shooting woes it’s currently going through.

Without Fernando, forward Jalen Smith has been thrust into the role of Maryland’s primary interior player. As a freshman, though, Smith wasn’t often asked to play with his back to the basket and use true post-up moves to score.

Over the summer, Morsell saw Smith, his former high school teammate, work to add strength and transform his game to infuse post-up elements.

“It’s definitely been something that he wanted to emphasize over the summer. He got stronger,” Morsell said. “He’s doing more drop steps, he’s more powerful when he finishes.”

[Read more: “We gotta be better”: Maryland men’s basketball looks to learn from lackluster first half]

As Maryland has shown a higher propensity to rely on perimeter shots, and Turgeon clamors for a more adept post-up game, Smith has been mindful of how he can keep progressing in that phase of his game.

“Just continue to work. I watch film every day about moves I could do better,” Smith said. “I watch film with the coaches about moves that other bigs do that I could add to my arsenal, and just build upon that.”

Turgeon also welcomed two freshmen big men in twin 6-foot-10 forwards Makhi and Makhel Mitchell to help fill the void Fernando left inside. Forward Donta Scott, at 6-foot-7, also provides a potential interior presence that the team is trying to develop. Forward Ricky Lindo, who has played sparingly of late, is another option.

The team also added another freshman big man in 7-foot-2 center Chol Marial, who Turgeon said is progressing back from surgery on stress fractures in both legs.

When guard Anthony Cowan decides whether or not to pass the ball into the post, he says the first thing he looks at is his teammate’s positioning. As the season progresses, both Turgeon and Cowan anticipate adding different sets to improve the position inside.

“It’s huge that we make sure we get some more post-up plays in,” Cowan said. “We’re confident in our bigs scoring down there. Now it’s just our job to get them the ball.”

With the Terps about to take on their second Big Ten game on Tuesday night against Penn State, the team knows how much of an asset post play can be when times get tough in the Big Ten.

Maryland saw the offensive effect that Fernando had when the team found itself in precarious spots last season. As the now-No. 4 Terps continue their season, they’ll look to find ways to improve their interior scoring with the skill sets the current post players possess.

“Offensively, [Bruno] was just impossible to guard one-on-one. We obviously don’t have Bruno on this team anymore,” Morsell said. “But we’ve definitely got some good post players who bring a lot of different things to the table.”