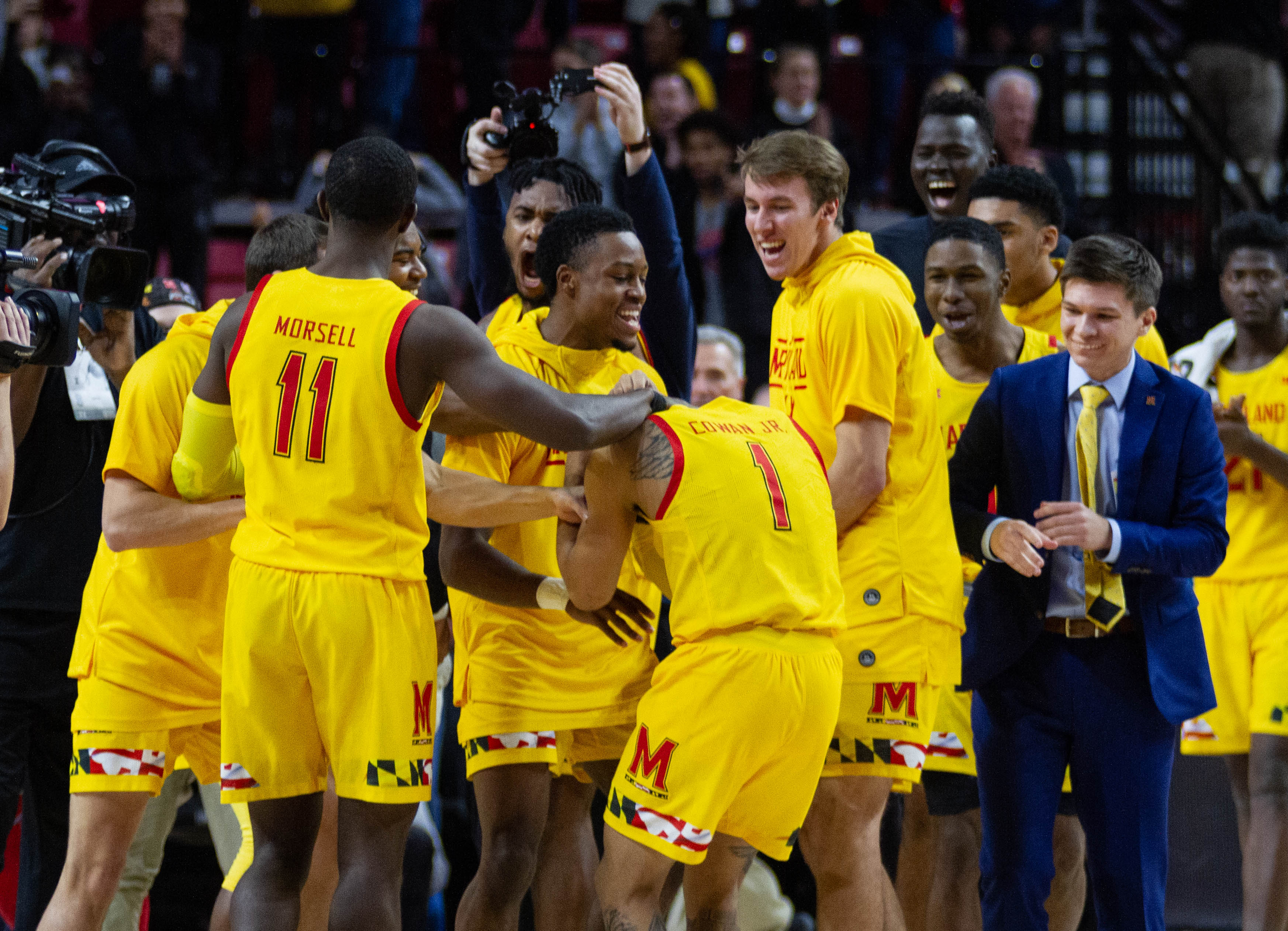 Maryland men’s basketball forward Jalen Smith wrapped his arms around Anthony Cowan as the senior point guard walked toward the free-throw line with 2.1 seconds to play in a tie game.

Cowan had just leveled the score with a clutch 3-pointer on one end, then followed that effort with a steal to take away any chance of Illinois winning the game in regulation. As Cowan recovered the loose ball, Fighting Illini guard Andres Feliz committed a foul to give the No.3 Terps’ leader his chance to win the game.

The four-year starter stepped to the line and calmly knocked down a free throw, pushing his team ahead for the first time since early in the first half. It was the senior guard, with part of his 20 points coming with time winding down, who pushed his team to a 59-58 win over Illinois in its Big Ten opener on Saturday night at the Xfinity Center.

“Anthony was just Anthony,” coach Mark Turgeon said. “It’s a miracle. When he made the shot I’m like ‘OK, we’re going to overtime,’ and I felt pretty good. Then we got the steal, and they fouled him.”

After hitting the first attempt from the free-throw line, Cowan missed the second on purpose to force the Fighting Illini (6-3) to improvise with less than two seconds remaining. Illinois controlled the rebound but couldn’t get an attempt off before the buzzer sounded.

When the clock hit zero, Maryland’s bench spilled onto the floor and ran directly to Cowan, who became the center of the team’s celebration after cementing himself as the unquestioned central figure of the comeback.

Cowan’s second-half heroics helped the Terps (10-0) overcome another sluggish start, which played a part in Illinois’ 15-point lead early in the second half.

The deficit marked Maryland’s largest of the season, and the Terps were on the brink of a slow start finally burning them.

“[Illinois] definitely came in and gave us one of the best shots they had,” Cowan said. “We just didn’t play up to our ability.”

Maryland trimmed the margin to nine after Cowan converted three free throws with 16 minutes to play. The Terps pushed to within nine on three more occasions over the next four minutes, but the Fighting Illini kept answering back on the other end.

Once Maryland started to string together defensive stops and made shots during a 6-0 run — capped by guard Darryl Morsell’s 3-pointer — that cut Illinois’ lead to 51-46 with just over eight minutes to play, the Xfinity Center crowd was fully unleashed.

From there, the Terps’ defense locked in and became the driving force in continuing the comeback bid as the offense found only intermittent success. In the final 12:30 of the second half, Illinois converted only two field-goal attempts.

“I mean, No. 3 team on the road. Got 20,000 screaming, you know, it was not going to be easy,” guard Ayo Dosunmu said. “You’re not going to be able to just come and run your plays freely. I feel like we got the looks that we wanted, and we just missed them.”

The Fighting Illini’s advantage dwindled further when defenders left Smith open at the top of the key for a wide-open 3-pointer that brought the Terps within four with 2:36 to play.

“Jalen Smith steps out and hits a three. Give him a lot of credit — he made four on the year,” Illinois coach Brad Underwood. “You play percentages, and he made a tough shot.”

On the next offensive trip, forward Donta Scott hit a layup to make it a one-possession game with just under two minutes in regulation.

Down three with 29.8 seconds to play, a Maryland pass deflected off an Illinois defender and out of bounds. Turgeon called a timeout to draw up a play. But Illinois defended the play well, and the Terps didn’t execute it properly, forcing Cowan to heave a shot and bail out the Terps to tie the game.

“I want the ball in my hands late,” Cowan said. “I was one [guy] that messed the play up. But luckily I was able to get it back and get a good look at the basket.”

As Cowan conducted an on-court interview following the game, MVP chants rained down from the stands.

The chant was a nod to another act of Cowan’s late-game heroics. This time, his aptitude in the clutch completed the comeback and helped Maryland survive the upset bid to remain undefeated 10 games into the season for the first time since 1998.

“It’s a tribute to who he is,” Underwood said. “It’s what a senior does. [A] senior steps up and makes big shots and makes big plays.”